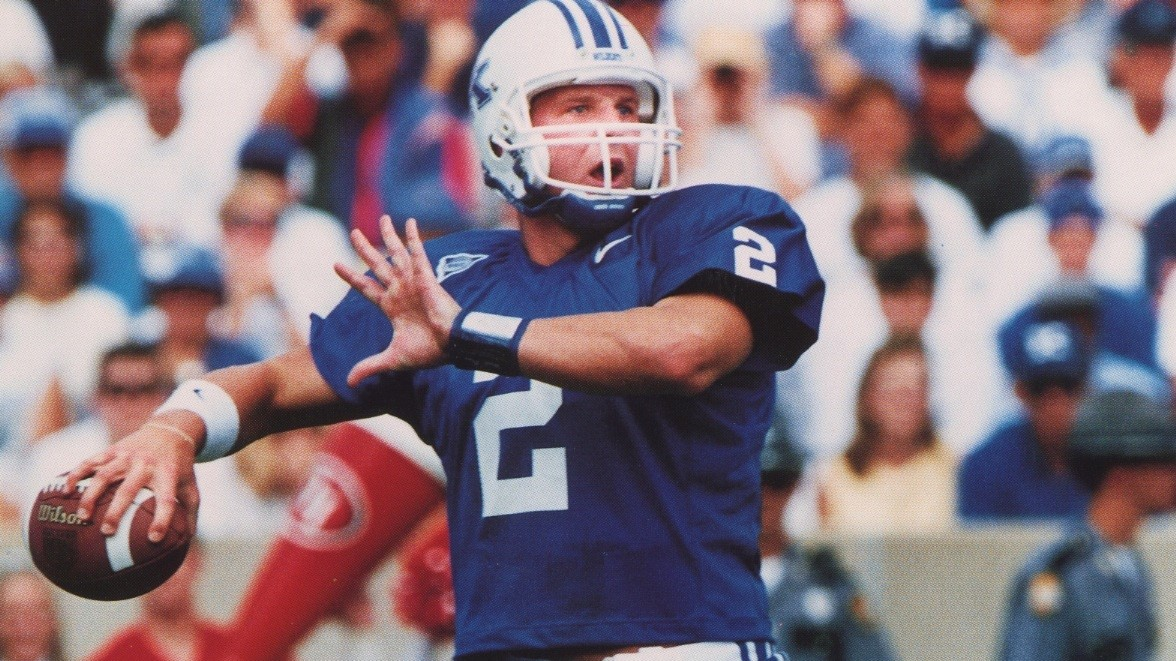 With Kentucky football’s season opener fast approaching, there is a buzz in the air among the Big Blue Nation. But, twenty years ago, there may have never been a bigger buzz surrounding the Kentucky football program than when star quarterback Tim Couch was entering his junior season, ultimately his last at UK, before going on to be the No. 1 overall pick in the NFL Draft.

Couch had a remarkable season during which he rewrote the school record book, ending with a New Year’s Day bowl game and a top-four finish in Heisman Trophy voting. To commemorate the 20th anniversary of Couch’s historic junior campaign, let’s look back at five of his best individual performances and 10 touchdown passes to remember from that 1998 season.

Sep. 5, 1998 at Louisville
Couch couldn’t have asked for a better way to start the season, christening Louisville’s new Papa John’s Cardinal Stadium with a 68-34 blowout victory over Kentucky’s intrastate rival. He was nearly flawless, posting his highest passing efficiency rating of the season, 240.85. Couch broke his own school records for most total offense and most passing yards in a single game, 498. He also tied his own school and SEC record for most touchdown passes in a single game with seven. Couch also displayed his big-play ability, throwing three touchdown passes of at least 48 yards while averaging 17.2 yards per completion, his most that season.

Sep. 26, 1998 at Florida
Although the Wildcats lost to the Gators in a high-scoring affair, 51-35, Couch put up more great numbers to keep Kentucky competitive throughout the contest. Late in the first quarter, he provided perhaps his most exciting pass of the season, connecting with senior wide receiver Craig Yeast on a 97-yard touchdown, the longest pass completion in school history. Couch added his name to the record book a few more times during the game, breaking Bill Ransdell’s school records for most career total offense, most career passing attempts and most career passing yards. About midway through the third quarter he hooked up with Yeast for another long touchdown; this time it was 74 yards. Couch ended up passing for 406 yards, 393 yards more than in his first collegiate start in Gainesville two seasons prior. To this day, it is still the most points that Kentucky has ever scored against Florida in Gainesville.

Oct. 3, 1998 at Arkansas
Once again in a losing effort, Couch provided plenty of offensive fireworks. Kentucky lost to the Razorbacks 27-20, with the Wildcats having a chance to score in the final seconds, but the throw to senior wide receiver Kevin Coleman was just past the receiver’s outstretched hands. Couch probably needed to ice his right shoulder after the game as he set both school and SEC records for most passing completions, 47, and most passing attempts, 67, in a single game. Couch also broke his own school record for most passing yards in a single game with 499. He also was on a bit of a hot streak, throwing a touchdown pass in five consecutive quarters, that ended with his four-yard scoring strike to Garry Davis in the third quarter. To top it all off, Couch broke Ransdell’s school record for most career total offensive plays.

Oct. 17, 1998 at LSU
In quite arguably the signature win of Couch’s career with the Wildcats, he led the squad to a victory over the Tigers on a field goal made on the final play of the game by kicker Seth Hanson. He did most of his damage coming out of halftime, throwing all three of his touchdown passes in the third quarter. Couch ended up throwing for 391 yards, just shy of his fourth 400-yard passing performance through the first seven games of the season. It was Kentucky’s first road win over a ranked SEC opponent since Oct. 15, 1977 at LSU. It is also the second most points that the Wildcats have ever scored against LSU, 39. He was named SEC Offensive Player of the Week for his efforts in the contest.

Nov. 14, 1998 vs. Vanderbilt
In what ended up being his final home game, Couch may have saved his best for last against the Commodores. Just like in the LSU game, he threw for three touchdowns in the third quarter, this time throwing five touchdowns for the game. Kentucky ended up scoring 31 points in that third quarter, the second-most points scored by the Wildcats in a single quarter in school history, and the most since they scored 35 in the second quarter against North Dakota on Nov. 18, 1950. In a recurring theme throughout the season, Couch set many records during the game. He broke his own school single season records for most total offense, most passing completions, and most passing yards. Couch was deadly accurate in his home finale, completing 83-percent of his 53 passing attempts, setting an NCAA record for best completion percentage in a single game with at least 40 passing completions. He was also very close to having a 500-yard passing effort, throwing for 492 yards. With the win, Couch led the Wildcats to their first seven-win season since 1984.

Touchdown Pass No. 1 (Sep. 5, 1998 at Louisville)
It didn’t take long for Couch to get his historic season going, hooking up with tight end James Whalen on a 56-yard bomb with 4:49 remaining in the first quarter. It was the first of many touchdown passes that season. It also gave the Wildcats the lead for good, putting Kentucky up 10-7 on their way to a 68-34 blowout win over the Cardinals.

Touchdown Pass No. 7 (Sep. 5, 1998 at Louisville)
The first play of the fourth quarter, five seconds into the final frame, Couch tied his own school and SEC record for most touchdown passes in a single game with his seventh, a 32-yard scoring connection with wide receiver Quentin McCord. With Kentucky leading the contest 55-16 after that score, he was pulled from the game after that drive.

Touchdown Pass No. 13 (Sep. 19, 1998 vs. Indiana)
Early in the fourth quarter, with 13:09 remaining in the game, Couch hooked up with running back Anthony White on a 48-yard scoring play that broke Babe Parilli’s school record for most career touchdown passes, a record that stood for 47 years. It fueled Kentucky to victory over the Hoosiers, overcoming a 17-point deficit, at the time the largest comeback in school history.

Touchdown Pass No. 14 (Sep. 26, 1998 at Florida)
With 3:42 remaining in the first quarter Couch threw a pass, out of his own end zone, to Yeast that he ended up taking 97 yards for a score, resulting in the longest pass completion in school history. That thrilling play briefly gave the Wildcats the lead over the Gators in Gainesville, 14-7.

Touchdown Pass No. 15 (Sep. 26, 1998 at Florida)
The explosive plays weren’t over yet for Couch against the Gators, hooking up yet again with Yeast on a 74-yard touchdown pass with 6:13 remaining in the third quarter. It was his fourth career touchdown pass of at least 74 yards.

Touchdown Pass No. 29 (Nov. 7, 1998 vs. Mississippi State)
This was perhaps Couch’s most improbable touchdown pass of his junior season. With 8:21 remaining in the fourth quarter, and the Wildcats clinging to a slim one-point lead over the Bulldogs, he best displayed his athletic ability. While trying to avoid a sack, Couch, off balance and falling backwards, threw the ball up for grabs in the end zone in the direction of Yeast. Yeast miraculously came down with the six-yard score, sealing the 37-29 win for Kentucky, making the Cats bowl eligible for the first time since 1993.

Touchdown Pass No. 33 (Nov. 14, 1998 vs. Vanderbilt)
With 5:50 remaining in the third quarter Couch connected with Yeast for yet another long touchdown score, this time 74 yards to double up the Commodores’ score, 34-17. It was his fifth, and final, career touchdown pass of at least 74 yards.

Touchdown Pass No. 36 (Nov. 21, 1998 at Tennessee)
With the game well out of reach, the No. 1 ranked Volunteers ahead of the Wildcats 59-14 prior to the play, Couch completed the 74th and final touchdown pass of his collegiate career. Ironically it was one of his shortest touchdown passes of his career, a three-yard toss to Lance Mickelsen with 4:16 left in the fourth quarter.

Touchdown Pass No. 38 (Sort Of, Not Really) (Jan. 1, 1999 vs. Penn State)
The NCAA did not count bowl game performances toward an individual’s statistical records until the 2002 season, so technically Couch’s last touchdown pass came against Tennessee in late November. But, in reality, his true last touchdown pass of his career in a Wildcat jersey came early in the Outback Bowl against the Nittany Lions. With 3:51 remaining in the first quarter, Couch tossed a 16-yard scoring strike to White, giving the Wildcats their biggest lead of the game at 14-3. Kentucky ended up losing the Outback Bowl to Penn State, 26-14.