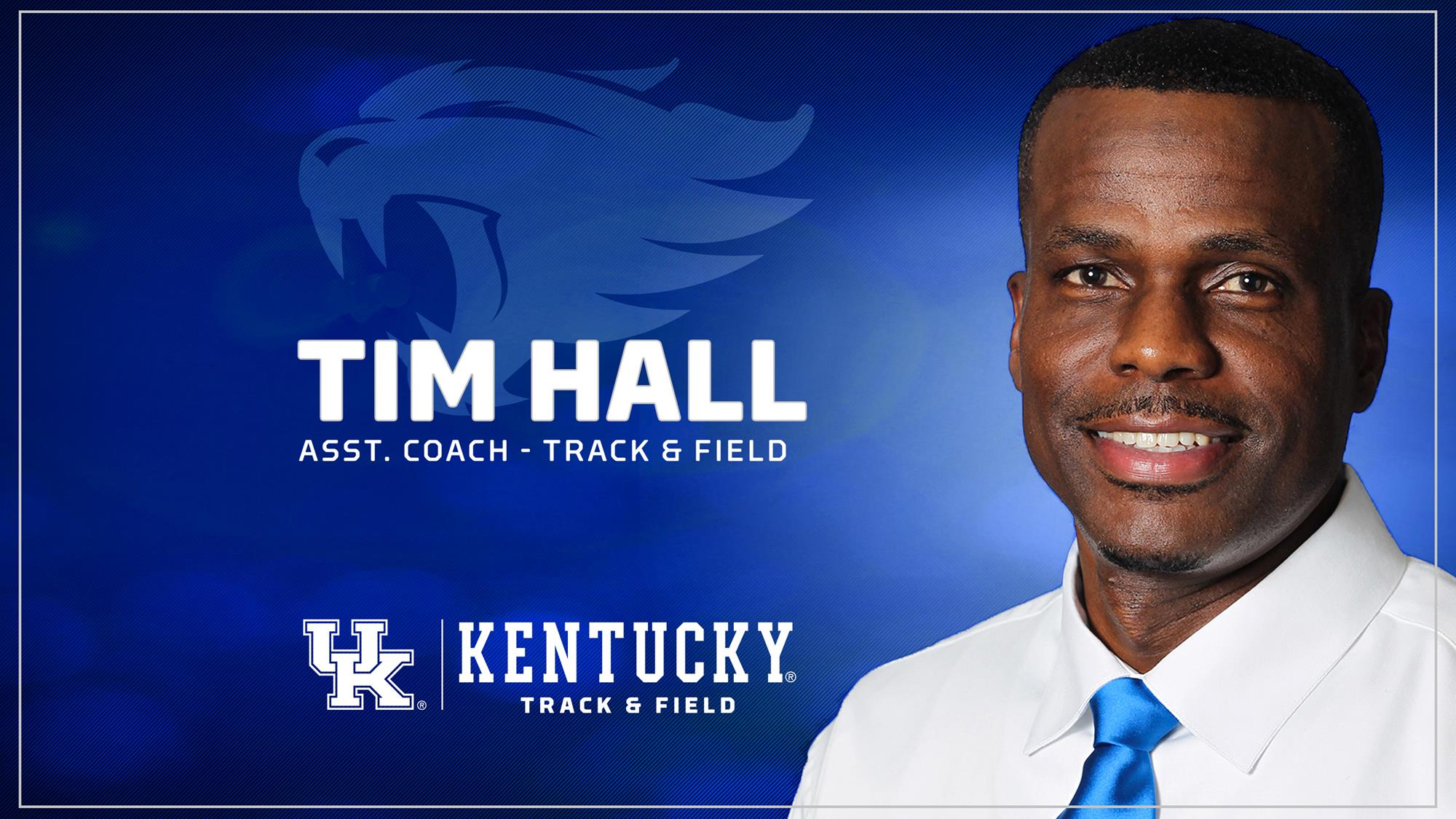 LEXINGTON, Ky. – Kentucky Track and Field and Cross Country Head Coach Lonnie Greene has announced that Tim Hall, who coached Wildcat great Dezerea Bryant to the 2014 NCAA 200-Meter Championship and has coached more world-class sprinters the last four years at Tennessee, will return to UK as an assistant coach.

Hall will coach the UK sprinters.

Over the course of his career, Hall has coached an Olympic Gold Medalist, four Olympians, a World Champion and silver medalist, 10 NCAA Champions, nine SEC Champions and 118 All-Americans to name but a few of his athletes accomplishments.

“Coach Hall has a proven track record of recruiting and developing some of the very best athletes in the world,” Greene said. “He’s done it at Kentucky, which made bringing him back to UK make all the more of a no-brainer, but when you look at his career, he’s done it wherever he’s gone. When you talk about being the current coach of some of the brightest stars in our sport, Coach Hall brings just what we’re looking for in our Kentucky Track and Field program.”

During his season as an assistant at Kentucky, Hall’s sprinters helped vault the UK women’s team into the top 10 on the national stage. Kentucky finished ninth at the 2014 NCAA indoor meet and a then-program-best seventh at NCAA outdoors.

Individually, Dezerea Bryant became the first Kentucky woman to win an NCAA sprint championship. At the 2014 NCAA indoor championships, she won the 200-meter dash in 22.69 seconds and also finished second in a photo finish in the 60 dash (7.12) to account for 18 team points.

“I’m so excited to be returning to UK and Lexington,” Hall said. “We loved our time here and can’t wait to get back to work at the fantastic UK facilities. I want to thank Coach Greene and the UK administration for this opportunity. I was really inspired by Coach Greene’s vision for the UK program, and with the resources at our disposal we’re all so excited about what’s to come. I can’t wait to get started.”

Notably, in his time at Tennessee, he recruited and coached 100m World Silver Medalist Christian Coleman, who earlier this year set the 60m world record and won the IAAF World Championship in that event.

During Hall’s time at Tennessee, the sprinters have claimed six NCAA titles plus Coleman won The Bowerman, collegiate track and field’s top award, in 2017. His sprint group enjoyed another standout year in 2018. Mustaqeem Williams captured the 200m title at the Southeastern Conference Indoor championships, and the sprinters won 10 medals between the two conference championships.

Hall was voted the USTFCCCA Regional Assistant Coach of the Year.

Hall was named the 2017 USTFCCCA National Assistant Coach of the Year for the outdoor season. Hall coached Coleman to one of the best seasons in collegiate track & field history. Coleman won the indoor 60m and 200m as well as the outdoor 100m and 200m NCAA Championships, joining reigning World 100m Champion Justin Gatlin as the only two people to ever accomplish that feat.

Coleman also became the only person to appear on all four collegiate top-10 lists, ranking in the top two on all four lists. Coleman holds the collegiate record in the 100m (9.82) and is tied for the record in the 60m (6.45). He ranks second in collegiate history in the indoor 200m (20.11) and the outdoor 200m (19.85). Hall also guided Coleman to peak at the right time as he set all of those records during championship season. Coleman was named the 2017 USTFCCCA Indoor and Outdoor Track Athlete of the Year and was later honored with The Bowerman. After the historic 2017 season, Coleman turned pro and signed a seven-figure endorsement deal with Nike, but has continued to train with Hall. In 2018, Coleman broke the world record in the 60m (6.34) and won his first IAAF indoor world championship in the event two weeks later.

In addition to Coleman’s four All-American honors, Hall also worked with five other student-athletes who earned All-American honors in 2017. Nathan Strother recorded the second-fastest 400m in school history and earned second-team honors during the outdoor season. Mustaqeem Williams took 10th at the NCAA Indoor Championship in the 60m. The men’s 4x400m team also earned second-team All-America honors. On the women’s side Shania Collins progressed throughout the year and earned second team honors as well. Collins posted a time of 22.81 in the 200m this year, the third-fastest 200m in school history. In his first thee years, Hall has now coached four of the top five 200m times on the women’s side in school history.

Under Hall’s direction, Felicia Brown was the 2016 USTFCCCA South Region Women’s Track Athlete of the Year for both the indoor and outdoor seasons as well as the 2016 SEC Outdoor Track and Field Women’s Co-Runner of the Year. She won the 200m championship at SEC Indoors, NCAA Indoors and SEC Outdoors.

In 2016 Coleman claimed silver in the finals of both the NCAA 100m and 200m. During the indoor season, Coleman took gold in the NCAA men’s 60 meters and silver in the 200 meters at the SEC Championship before earning a national championship in the indoor 200m. Coleman was the Men’s SEC Indoor Runner of the Year Award.

In 2015 at UT, he produced five All-American honors and helped Coleman earn the SEC Freshman Runner of the Year Award.

During the indoor season, Hall helped guide Coleman to an SEC bronze in the 60-meter dash. Coleman would go on to earn first team All-America honors at the NCAA Indoor Championships, finishing 6th in a time of 6.62. Coleman was the first UT athlete to score at the NCAA meet in the event since 2008 and the first freshman to score since Justin Gatlin in 2001. For his efforts, Coleman was awarded the SEC Freshman Runner of Year.

Coleman would claim the award again in the outdoor season, becoming the SEC Co-Freshman Runner of the Year. He earned second team All-American in both the 100- and 200-meter dash.

On the women’s side, Brown qualified for the NCAA Championships in the 200-meter dash. She was 10th overall, earning second team All-America honors. Under Hall’s tutelage, Brown won the individual title in the 100-meter dash at the 2015 Penn Relays and also recorded the second-fastest 200-meter dash time in program history (22.76).

Hall spent the 2013-14 season as sprints assistant coach at Kentucky helping build UK into a sprints and hurdles power. He held a similar position the five previous years at Clemson and also spent 12 seasons coaching at Charlotte.

Hall has coached winners on the conference and national level, having produced SEC and ACC individual champions and multiple NCAA winners and medalists.

Hall notably coached three-time NCAA champion hurdler Brianna Rollins, who set the American record in the 100-meter hurdles (12.26 seconds) in 2013 when she won The Bowerman. He has also coached a pair of 2012 Olympians, including Warren Fraser (Bahamas).

Hall was an assistant for Charlotte from 1996-2008, serving as associate head coach his final three years. While there, he coached the school’s first-ever All-Americans in men’s and women’s sprints. ? Prior to his time with Charlotte Hall was the head coach for the Queen City Striders AAU Track Club for six years. In 1995, the Striders earned 36 medals at the AAU Junior Olympic Games under Hall’s guidance. Hall graduated with a bachelor’s degree in Psychology from South Carolina State in 1994. He was a three-time captain for the Bulldogs’ track team and an All-Mid-Eastern Athletic Conference performer as well.

Hall is married to the former Adrean Byers. The couple has two children (TeAnna and Timothy Jr.) and one granddaughter (Zanyla).
—
For the most in-depth coverage of the UK cross country and track and field program follow the @KentuckyTrack social media channels on Instagram, Twitter and Facebook as well as on UKathletics.com.