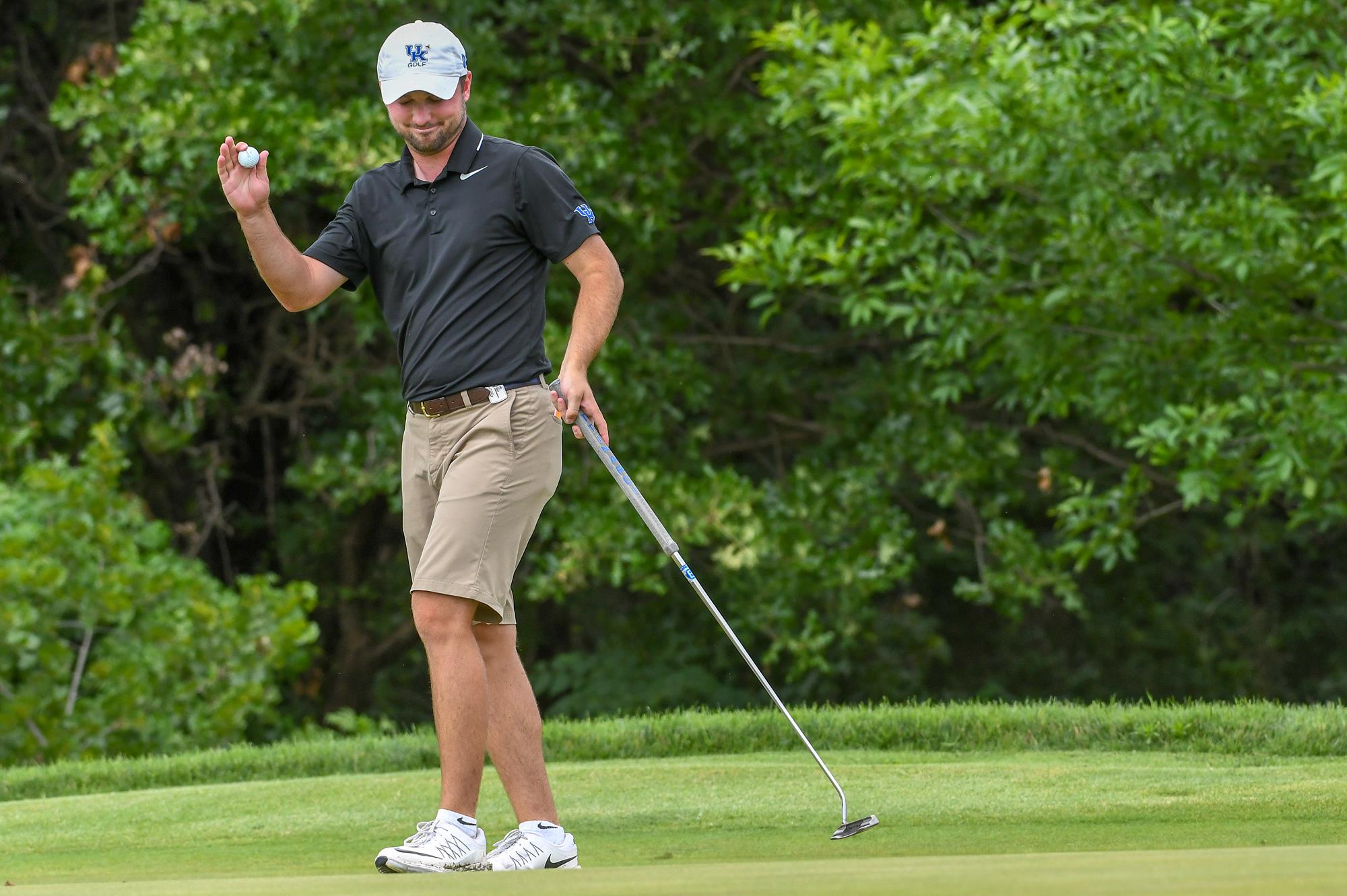 LEXINGTON, Ky. – A rain-soaked, stormy Friday postponed two former Kentucky men’s golfers’ second rounds at the Barbasol, but a birdie-filled Saturday more than made up for it. Both Chip McDaniel and Cooper Musselman made the cut and will play through the weekend during the state of Kentucky’s first PGA Tour event in decades.

McDaniel had work to do after firing a 2-over-par opening round. What he did during the second round, which began early Saturday morning, was much of the same as what he did during his decorated four-year career with the Wildcats. Needing a low score to advance to the third round, the Manchester, Kentucky, native fired a 6-under par, 66, to get to 4-under through two rounds and dip below the cut line.

Musselman enjoyed a 3-under round during his opening round on Saturday to secure his spot at 5-under through two rounds of action.

Musselman matched the 3-under, 69, during the third round to move into a tie for 49th overall. He’s 8-under for the tournament. McDaniel carded a 1-under, 71, during round three and is tied for 65th with 18 holes to go in his first pro event.

McDaniel opened his stellar second round at the par-four 10th and began the day with a birdie. An eagle on the par-five 14th really got his round going. A bogey on the 16th was immediately countered with a birdie at the 17th as he moved to 3-under for the round heading into the turn. His back nine saw birdies on the No. 2, No. 4 and No. 8 holes with no setbacks. A par on the final hole where he needed to get up-and-down preserved the comeback effort for a spot in the weekend’s action.

His third round featured an even-par front nine and two birdies to combat a bogey on the back nine for the 1-under score.

Musselman faced an early deficit with a bogey at the third to begin the second round. But, his round would gain traction with back-to-back-to-back birdies on the sixth, seventh and eighth holes. He’d pick up another stroke with consecutive birdies at the No. 15 and No. 16, but a bogey on the 17th resulted in the 3-under round.

He nearly mirrored the start he had in the second round during the third round with a bogey on the first, followed by three birdies over the next six holes. He played the back nine at 1-under par with the birdie coming at the par-four 12th for another round of 69 to jump into the top 50 on the leaderboard.

Keene Trace is no stranger to hosting major tournaments. Designed by world-renowned golf architect Arthur Hills, it has hosted the USGA Senior Amateur, the NCAA Championship, the men’s and women’s Southeastern Conference Championship, the Women’s Western Open, the Kentucky Open and the state amateur.

McDaniel and Musselman helped lead the Wildcats to an NCAA Championship appearance twice during their tenure, including a Regional appearance in each of the last three seasons. They combined for nearly 100 career starts, 130 par-or-better rounds, 25 top-10 finishes and 45 top-20 finishes.

McDaniel played 133 collegiate rounds with a 72.00 stroke average. His senior season was highlighted by a victory at the Bearcat Invitational where he fired a career-low 54-hole total of 201. That marked the second-lowest score in the Brian Craig era. He matched that total at the Gary Koch Invitational where he helped UK win its fourth event of the season in a runner-up individual finish.

Musselman shot a career average of 72.91 over 129 rounds. He led the Wildcats his senior season in stroke average (72.08), par-or-better rounds (21) and top-10 finishes (4). An individual win at the Crooked Stick Intercollegiate marked a season high for Musselman. He also carded career-low rounds (67) and 54-hole tournament scores (207).