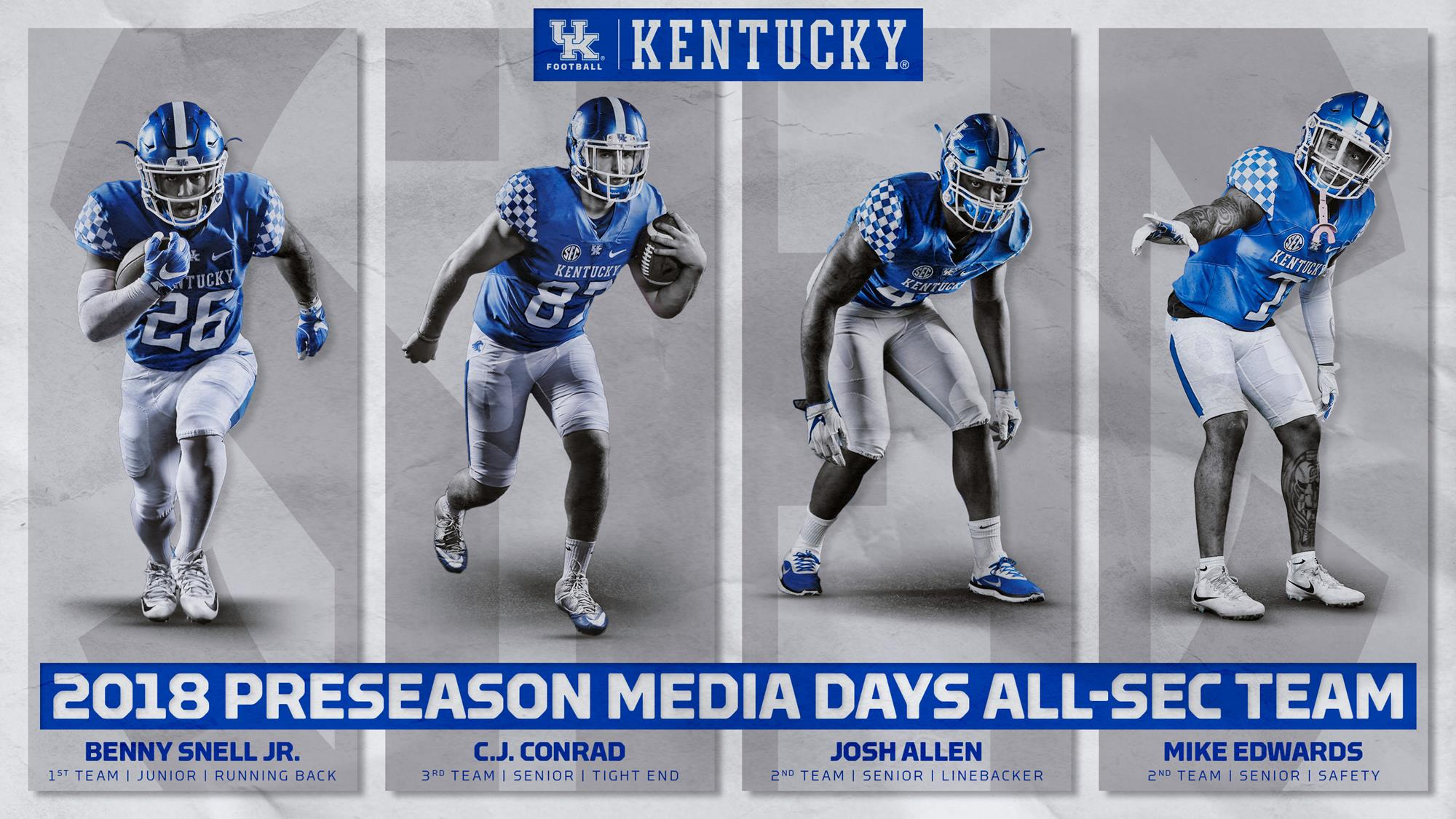 Snell Jr., (Westerville, Ohio) led the SEC in rushing touchdowns (19) and ranked third in total rushing yardage (1,333) and rushing yards per game (102.5) in 2017. His 1,333 rushing yards set a school record for most rushing yards by a sophomore. He also became the first player in school history to record 1,000 yards in consecutive seasons.

Snell is currently on the watch lists for the Maxwell Award (Player of the Year) and the Doak Walker Award (nation’s top running back).

Edwards (Cincinnati, Ohio) was a second-team defense selection after leading Kentucky and ranking 10th in the SEC in tackles per game last season with 7.5. He also had a team-high four interceptions to go along with a team-high seven pass breakups. Edwards is just the fourth player in school history to lead the team in both interceptions and tackles in the same season, joining Darryl Bishop in 1972, Quentus Cumby in 2002 and Danny Trevathan in 2011. After charting a season-high 11 tackles vs. Ole Miss, Edwards now has nine games with double-digit tackles. He earned first-team All-SEC honors by Phil Steele in 2017.

Allen, (Montclair, New Jersey) a 2017 Butkus Award semifinalist, totaled 65 tackles (fourth on the team) in helping lead UK to its second-straight bowl appearance. He also had a team-high 9.5 tackles for loss, 7.0 sacks, a team-high four quarterback hurries, three pass breakups, two forced fumbles and one interception. Allen was named second-team All-SEC by the Associated Press last season and was a third-team All-SEC choice by Phil Steele.

Conrad (LaGrange, Ohio) is considered one of the most gifted tight ends in the country, having averaged a touchdown every five times he has caught a pass in his career. In 2017, he ended the season ranking second on the team with 286 receiving yards on 16 catches to go along with a team-high four touchdowns despite his season ending prematurely on Nov. 18 due to a foot injury. His 17.9 yards per catch average ranked second on the team.

In the first two games of the 2017 season, he had a receiving TD, becoming the first UK tight end with a receiving touchdown in consecutive games since Jacob Tamme on Nov. 24 and Dec. 31, 2007.

In his three-year career, Conrad has totaled 697 receiving yards with nine scores.

Conrad is currently a nominee for the 2018 Allstate AFCA (American Football Coaches Association) Good Works Team® and is on the watch list for the Mackey Award for the second straight season (nation’s top tight end).