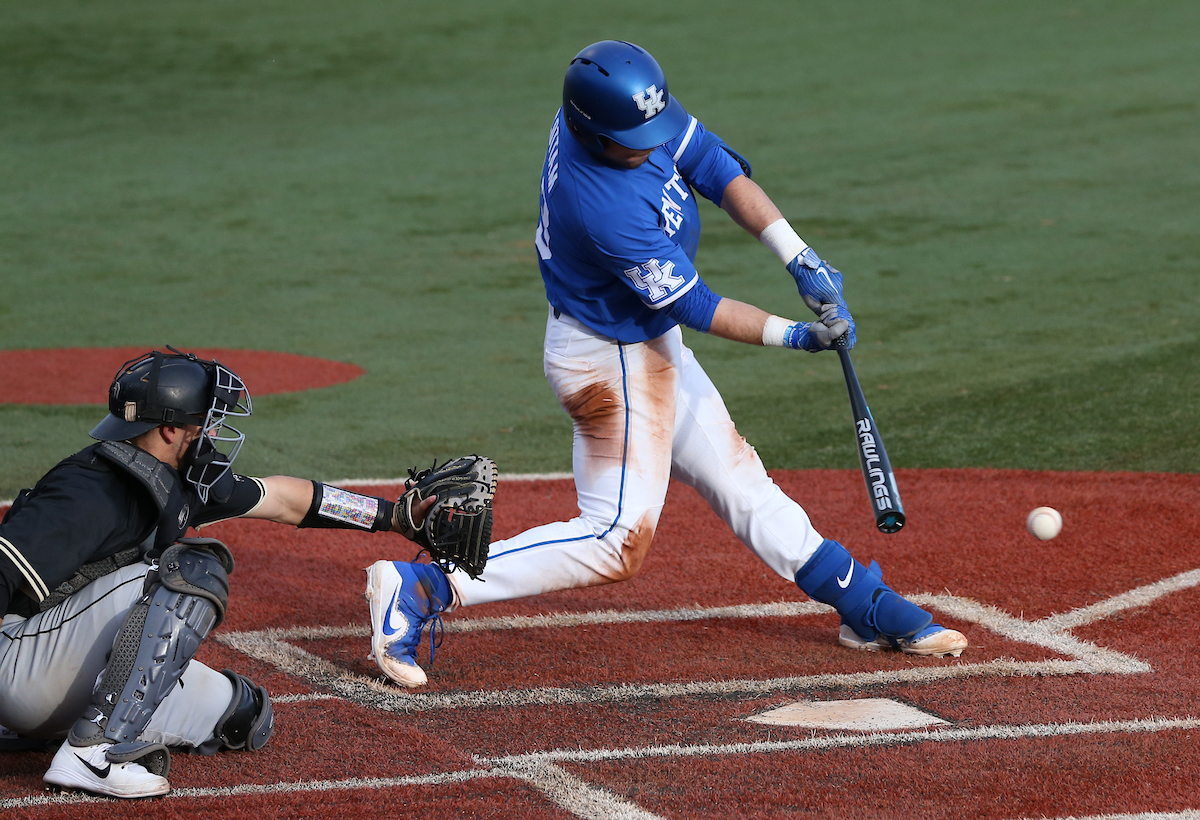 LEXINGTON, Ky. – Kole Cottam crushed a two-run home run in the first at bat of his return to his hometown but that’s all the offense No. 11 Kentucky could muster in a 6-2 defeat at Tennessee.

The Cats fell to 29-16 overall and 10-12 in Southeastern Conference play with just eight league games remaining, leaving the club in the scrum to make it to Hoover at the end of the month. The Volunteers crept within a game of UK in the standings with the win, erasing a 2-0 deficit after Cottam’s home run.

UK starter Sean Hjelle was victimized by the Volunteers’ swinging early in the count, giving up five runs – four earned – in 5.2 innings of work. The Cats’ normally steady defense had an off night as well with two errors and several mental miscues that turned into Tennessee runs.

Cottam got the game started on the right foot, hammering a 3-2 pitch over the picnic area beyond the left field wall for his 16th home run of the season. The blast drew a huge response from the more than 30 family and friends the junior had in attendance while playing down the road from his family’s home.

Tennessee right-hander David Linginfelter, who was 2-4 with an earned run average of 4.34, coming in, retired 11 hitters in a row and allowed just two hits after entering the game in relief of starter Will Heflin in the third inning. The Cats loaded the bases with no outs in the ninth but could not push across the tying runs.

The border rivals will meet again Saturday evening at 6 p.m. ET at Lindsey Nelson Stadium. The game will be streamed on the SEC Network+ and can be heard on the radio at 630 AM WLAP.

Bottom 3rd – Brandon Chinea reached on an infield hit to 3B and advanced to second on Justin Ammons’ single to CF. Pete Derkay walked to load the bases. Lipcius singled to RF, scoring Chinea with Ammons thrown out at the plate. UK 2, UT 2.

ON DECK
The border rivals will meet again Saturday evening at 6 p.m. ET at Lindsey Nelson Stadium. The game will be streamed on the SEC Network+ and can be heard on the radio at 630 AM WLAP.