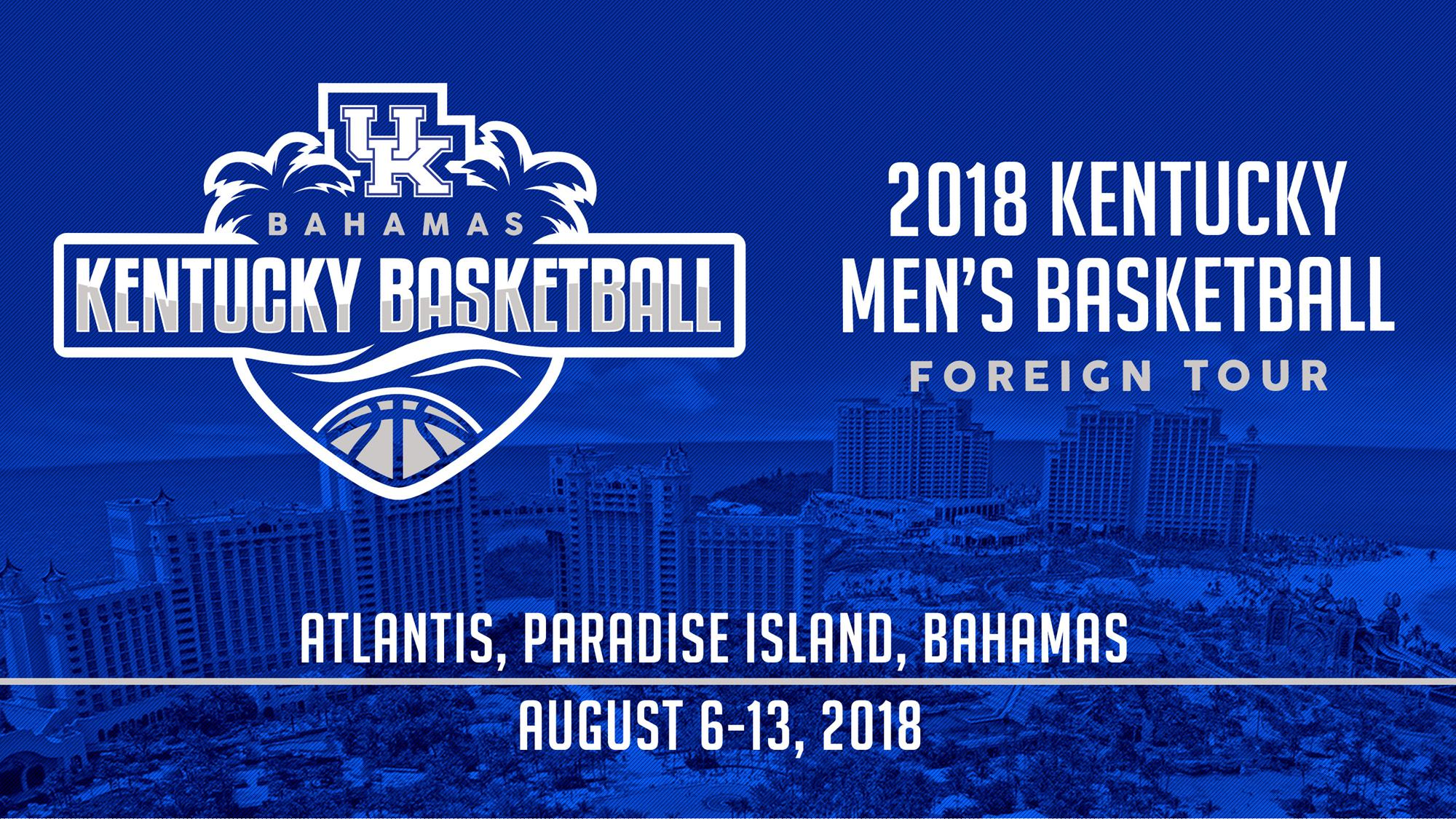 UK Men’s Basketball to Return to Bahamas for Foreign Trip

LEXINGTON, Ky. – Pack your bags, Big Blue Nation, because the Kentucky men’s basketball team is headed back to a memorable destination for a foreign basketball tour this August: the Bahamas.

The Wildcats will return to the Atlantis on Paradise Island in the Bahamas for a four-game, eight-day trip from Aug. 6-13. UK will train on the island and play four professional teams during its stay as it prepares for the 2018-19 season.

Kentucky will play the Bahamas national team on Aug. 8, San Lorenzo de Almagro on Aug. 9, Mega Bemax on Aug. 11 and Team Toronto on Aug. 12. The Wildcats will arrive Aug. 6, practice on Aug. 7 and enjoy an off day Aug. 10. Fans won’t have to leave to resort as all games will be played at the Atlantis Imperial Arena, where Kentucky played Arizona State during the 2016-17 season. A full schedule is below.

NCAA rules allow for a foreign tour by an intercollegiate team once every four academic years. Kentucky’s Big Blue Bahamas tour is a joint venture between Complete Sports Management and the Bahamas Basketball Federation.

“If you know me, you know I’ve talked a lot about college basketball taking over the month of August,” UK head coach John Calipari said. “It’s a perfect time – when we have nothing else going on – to get with our kids, practice and give our fans a chance to see our team before school starts. The current rules only allow us to do it every four years and this one comes at a great time. We’re going to have another young team and will have a tough schedule early. Getting these games in against professional competition and allowing us to practice will give our guys an early idea of how hard this is going to be.”

UK is coming off a 26-11 season that resulted in another Sweet 16 berth – UK’s seventh in nine seasons under Calipari – and the Wildcats’ fourth straight Southeastern Conference Tournament title. But now the Wildcats must find a way to retool after losing three of its top four scorers in Kevin Knox, Shai Gilgeous-Alexander and Hamidou Diallo, who announced recently they are entering their names in the 2018 NBA Draft and signing with agents, ending their collegiate eligibility.

Kentucky will welcome another star-studded recruiting class that is expected to be in competition for the top overall ranking yet again for Calipari and Co. UK has already announced three highly touted signees in Tyler Herro, Keldon Johnson and Immanuel Quickley but expects to add more before the signing period is complete. Kentucky can only comment on prospective student-athletes who have signed paperwork with the university.

Whatever UK’s final roster is for the 2018-19 season, the tour should prove to be instrumental in the early development of yet another young team that already has the likes of Duke, North Carolina, Louisville and SEC/Big 12 Challenge on its nonconference schedule.

Fans will remember the Bahamas served a similar purpose for UK’s memorable 2014-15 season. The Wildcats tipped off their 38-1 season with a 5-1 mark vs. the Dominican Republic national team, the Puerto Rico national team reserves and French first-division club team Champagne Chalons-Reims Basket in the Bahamas. It was the start of magical season that ended with an undefeated regular season, SEC regular-season and tournament titles, and a trip to the Final Four.

Of course, fans are encouraged to join the Wildcats on Paradise Island. Travel packages, which vary from as little as $173 a night to $479 for a stay at the Cove at the Atlantis, are available and include a variety of options.

Tickets are not included with hotel packages and must be purchased separately. Ticket books are priced at $400 each and will include entry into all four games. Children under the age of 2 will not require a ticket for admission. Tickets will be mailed in late June. All seating is general admission, except those held for team guests. K Fund members interested in the exclusive travel package, including charter flight from Lexington, may call (859) 257-6300 for more information.

“I still have some of our fans come up to me and tell me about how much fun they had in 2014 when we went to the Bahamas,” Calipari said. “This is a chance to see our team in an unbelievable setting, get up close with our kids and stay at the best vacation resort I’ve ever been to. The great thing about this time around is the games will be on site, making this even easier than the last trip. I can’t wait to get down there.”

Fans must stay at the Atlantis to attend games. Four-night minimum accommodations at the Atlantis are available. Nights may be added to the stay before Aug. 6 or after Aug. 13. All taxes and fees are included when booking rooms.

Official group transportation through Majestic Tours will be available for a special rate.

“The Bahamas is thrilled to have Kentucky returning for their foreign tour,” said Lea Miller, the founder and CEO of Complete Sports Management, an all-encompassing sports marking agency. “UK is a perennial powerhouse and the standard of college basketball. International travel is an educational experience that is priceless and we are excited to expose the Bahamian culture and beauty of the islands to their staff, players and fans.”

Kentucky’s competition will include:


Coinciding with the UK men’s basketball trip will be the seventh annual John Calipari Basketball Fantasy Experience. For the first time in the event’s history, the fantasy experience will be held outside of Lexington.

More information on the John Calipari Basketball Fantasy Experience and details on how to register are available at johncaliparibasketballexperience.com. 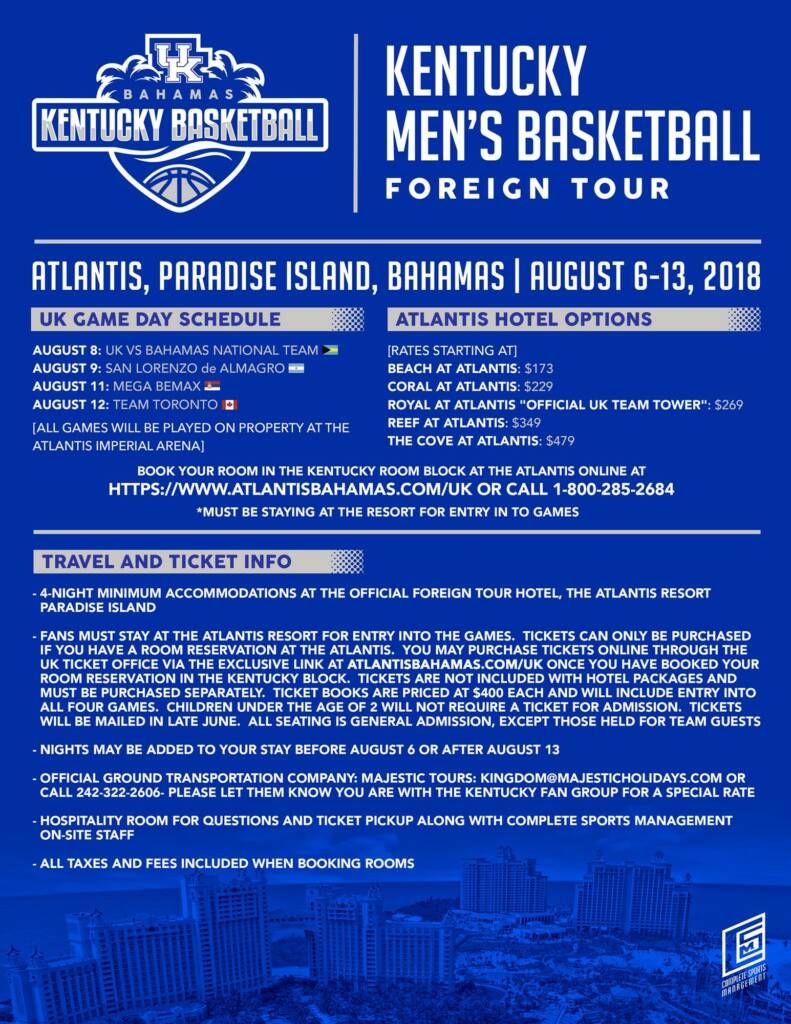