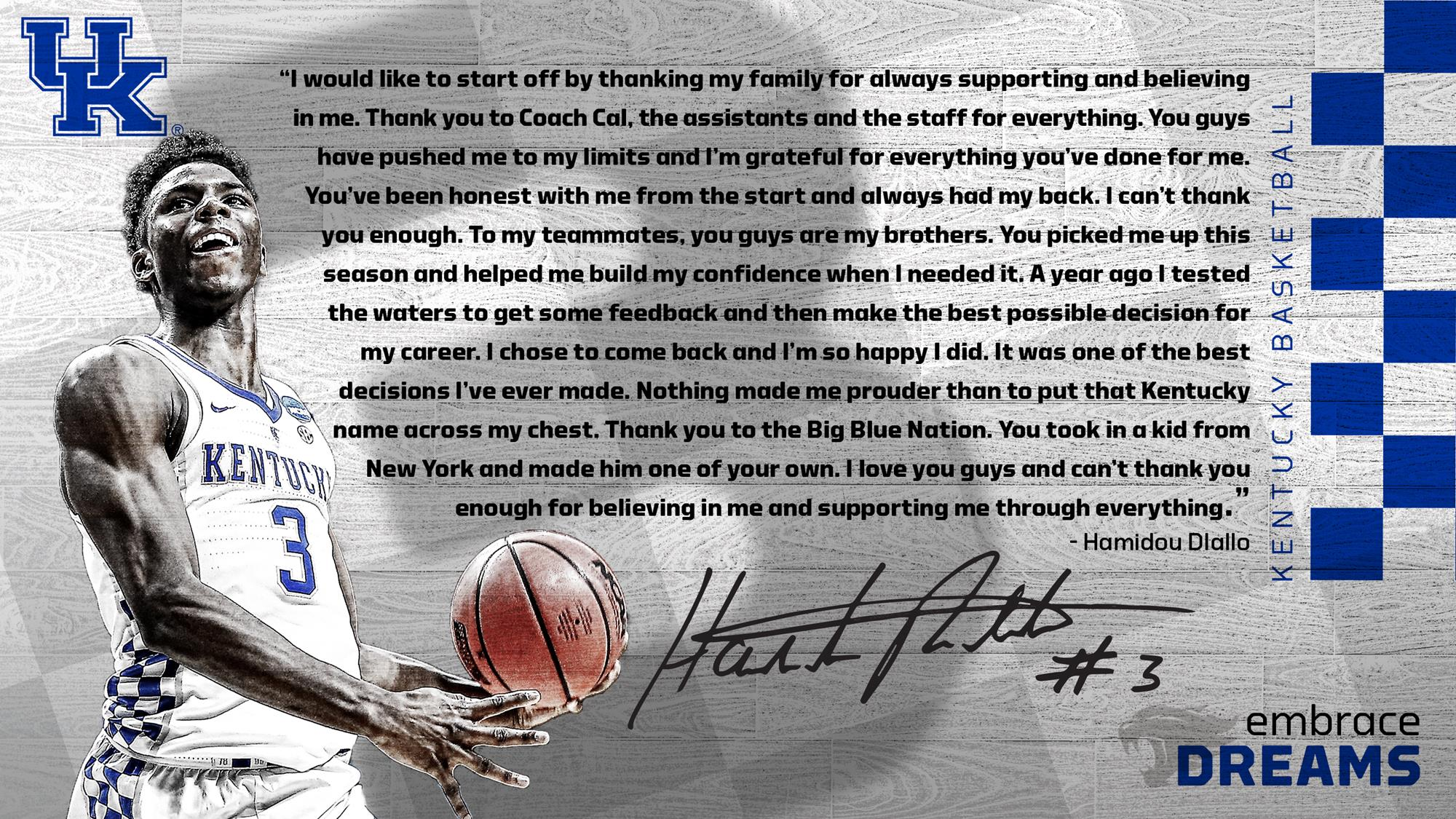 LEXINGTON, Ky. – Kentucky men’s basketball freshman guard Hamidou Diallo announced Monday that he plans to submit his name for the 2018 NBA Draft and hire an agent, which would effectively end his collegiate career.

“I would like to start off by thanking my family for always supporting and believing in me,” Diallo said. “Thank you to Coach Cal, the assistants and the staff for everything. You guys have pushed me to my limits and I’m grateful for everything you’ve done for me. You’ve been honest with me from the start and always had my back. I can’t thank you enough. To my teammates, you guys are my brothers. You picked me up this season and helped me build my confidence when I needed it.

“A year ago I tested the waters to get some feedback and then make the best possible decision for my career. I chose to come back and I’m so happy I did. It was one of the best decisions I’ve ever made. Nothing made me prouder than to put that Kentucky name across my chest.

“Coming back to school I knew wasn’t going to be easy Coach Cal told me it would be the hardest thing I would ever have to do and it was. But I grew up and became a man this year on and off the court. I know I’ve only scratched the surface with my game, but I’m now prepared to do it because of the work I’ve put in at Kentucky and the support of everyone at this university. With that said, I’m entering my name into the 2018 NBA Draft and am ready to take the next step.

“Thank you to the Big Blue Nation. You took in a kid from New York and made him once of your own. I love you guys and can’t thank you enough for believing in me and supporting me through everything.”

Diallo is the fourth underclassman from the 2017-18 Wildcats to declare for the 2018 NBA Draft. He will join freshman guards Shai Gilgeous-Alexander and Kevin Knox, who are entering the draft with an agent, forgoing their collegiate careers. Freshman forward PJ Washington has declared for the draft but will not sign with an agent at this time, opening up the possibility of a return.

“I remember going through this process with Hami last year,” UK head coach John Calipari said. “In both cases, our conversations were about what was best for Hami. Last year he wanted to come back to put on that Kentucky jersey in a game for the first time, compete for a championship and improve his game. He did all three this season.

“Hami got better in all areas of his game. True growth happens when you get knocked down to the point of questioning yourself. We already knew how talented of a player Hami was physically and athletically, but we all learned about Hami’s toughness, his character and his desire to win. I am so proud of his growth from beginning to end. He’s prepared to succeed and will succeed. He’s the best athlete in the draft who’s continued to improve his shooting. He’s only touched his true talent. I wish I had the opportunity to coach him another year but I understand and support his decision.”

Diallo’s athletic intangibles combined with quality big-time moments during his freshman season will draw plenty of attention from the pro level.

After enrolling at Kentucky prior to the spring semester, he did not play during UK’s Elite Eight run in 2016-17, electing to develop in practice and study the college game. He then utilized the NBA Draft process during the summer before opting to return to Kentucky for his freshman season despite significant NBA interest.

At last season’s combine, Diallo registered the best vertical jump of any player at 44.5 inches. He followed that with more preparation during the summer competing with Team USA at the 2017 FIBA U19 World Cup where he averaged 10.9 points, 3.9 rebounds in 18.4 minutes a game over seven games.

Diallo averaged 10.0 points and 3.6 rebounds per game while starting all 37 games for the Wildcats in 2017-18. He scored in double figures 16 times and topped the 20-point plateau on three occasions, including a breakout 22-point, eight-rebound performance against Buffalo in the second round of the NCAA Tournament. He knocked down a career-high nine shots and also added two blocks and a steal in the victory to send UK to the Sweet 16 for the seventh time under Calipari. Diallo’s NCAA Tournament began on a high note, jumpstarting eight points on offense with stellar defensive play against Davidson. He had a career-high three blocked shots and added a steal in the win.

Diallo was at his best when he was named the Southeastern Conference Freshman of the Week after pouring in 20 points and connecting on a career-high four 3-pointers in a win over Virginia Tech. That game was part of a stretch where he scored in double figures in seven straight games, including five with 18 or more.

The Queens, New York, native finished his freshman season ranking fourth on the team in points (371), sixth in rebounds (135) and third in blocks (31).

The 6-foot-5 guard is an athletic, springy guard with a wing span longer than 7 feet. Combined with his elite vertical, he is also a menace on the boards. Diallo averaged 3.6 a game and snared at least three 24 times, resulting once in a double-double with 10 points and 10 rebounds in the SEC opener against Georgia.

Playing on the brightest stage for any player from New York, Diallo shined in his Madison Square Garden debut in a win over Monmouth. He poured in a career-high 23 points on 8-of-13 shooting (61.5 percent) to go along with four rebounds and a pair of steals.

He opened his career at UK by scoring 14 or more points in each of UK’s first three outings, including 14 against No. 4/3 Kansas in the Champions Classic.