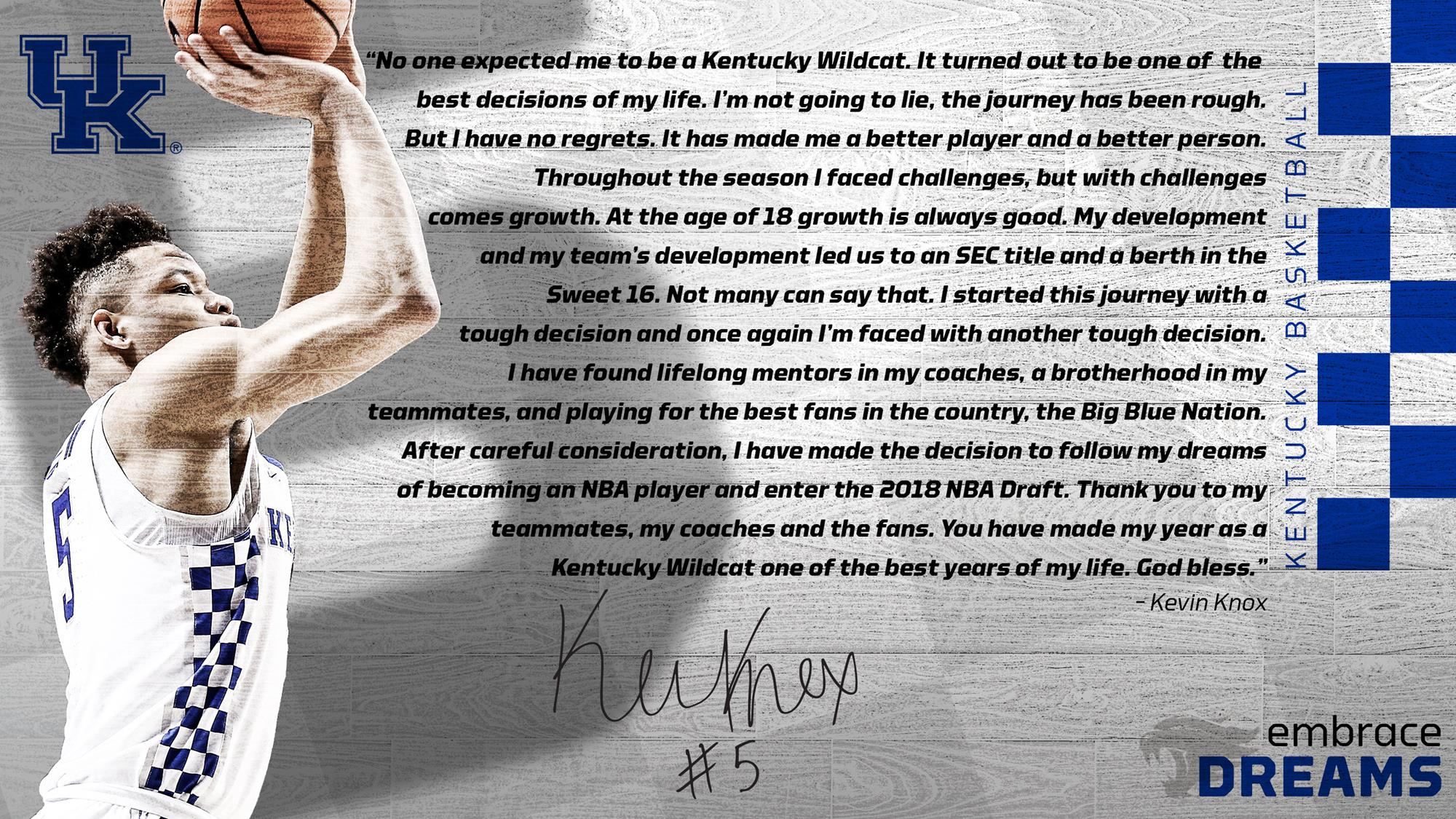 LEXINGTON, Ky. – Kentucky’s leading scorer and the Southeastern Conference Freshman of the Year, Kevin Knox, has decided to put his name in the 2018 NBA Draft. He plans to sign with an agent, which would effectively end his collegiate career at UK.

“No one expected me to be a Kentucky Wildcat,” Knox said. “It turned out to be one of the best decisions in my life. I’m not going to lie, the journey has been rough. But I have no regrets. It has made me a better player and a better person. Throughout the season I faced challenges, but with challenges comes growth. At the age of 18 growth is always good.

“My development and my team’s development led us to an SEC championship and a berth in the Sweet 16. Not many can say that. I started this journey with a tough decision and once again I’m faced with another tough decision. I have found lifelong mentors in my coaches, a brotherhood in my teammates, and playing for the best fans in the country, the Big Blue Nation.

“After careful consideration, I have made the decision to follow my dreams of becoming an NBA player and enter the 2018 NBA draft. Thank you to my teammates, my coaches and the fans. You have made my year as a Kentucky Wildcat one of the best years of my life. God bless.”

Kentucky’s top-rated recruit led the team in scoring, concluding his freshman season averaging 15.5 points per game. The Tampa, Florida, native also contributed 5.4 rebounds and 1.4 assists per game. Overall, Knox reached double-figure scoring in 30 games this season and had a team-high 10 games of 20 or more points, while also leading the team in rebounding on eight occasions.

He scored in double figures in 12 consecutive games before Buffalo limited him to eight points, becoming the only player to achieve that feat this season and first since De’Aaron Fox concluded the 2016-17 season scoring in double figures in 12 straight. He also notched 20 or more points in three straight games vs. Arkansas, Missouri and Ole Miss, the first player to do that since Malik Monk did it in November and December of 2016.

“Kevin came in as one of the youngest freshmen in the country and adapted as well as any player I have ever coached,” UK head coach John Calipari said. “He improved in every area of his game, became an efficient scorer like some of the best players I’ve coached here and could score all types of ways, including runners, pull-ups, 3-pointers, post-ups and in pick-and-roll offense. His defense and rebounding improved throughout the year, which is a big reason why we were able to go on a run at the end of the season.

“He’s one of the greatest kids I’ve coached. He was a great teammate, a great student and a great player. He is mature and responsible well beyond his years. All of that will bode well as he moves on to the pro ranks. His scoring ability and his 6-9 frame make him a positionless player that the entire league is looking for. I can’t wait to see what the next step is for him.”

Knox is the second Wildcat to enter his name in the draft, joining PJ Washington, who declared Tuesday. Washington, however, will not hire an agent, allowing him the option to return to college.

An Associated Press honorable mention All-America selection, Knox was tabbed the league’s co-Freshman of the Year by the 14 head coaches alongside of Alabama’s Collin Sexton. He was also an All-SEC First Team pick and earned SEC All-Tournament Team honors after helping UK to its fourth straight title.

Knox re-asserted himself into the national discussion as one of the nation’s best freshmen after a 34-point performance at then-No. 7/7 West Virginia and didn’t look back.

Knox was one of just two freshmen this season to earn both USBWA honors in the same week, joining Oklahoma’s Trae Young, who did it in December. It was also his first SEC honor. He was the first UK freshman to earn Tisdale Freshman of the Week honors since Tyler Ulis and Karl-Anthony Towns claimed the honor during the historic 2014-15 season. Monk was tabbed the Oscar Robertson National Player of Week following his 47-point performance against North Carolina last season.

Knox averaged 26.5 points and 6.5 rebounds per game in wins over Mississippi State and at No. 7/7 West Virginia that week. He had 19 points, six boards and a pair of steals against the Bulldogs. In the epic come-from-behind win over West Virginia, Knox poured in 34 points and added seven rebounds. The scoring output was the most since De’Aaron Fox had 39 in a win over UCLA in the Sweet 16 in the 2017 NCAA Tournament. The 34 points tied Monk’s freshman school scoring record on the road (Monk scored 34 at Ole Miss to open SEC play a season ago). They’re also the most by a UK freshman in a nonconference true road game.

All told, Knox concludes his career with Kentucky ranking eighth in scoring by a freshman (576 points), nine in total 3-pointers made by a first-year player (57) and 13th in rebounds by a freshman (200).