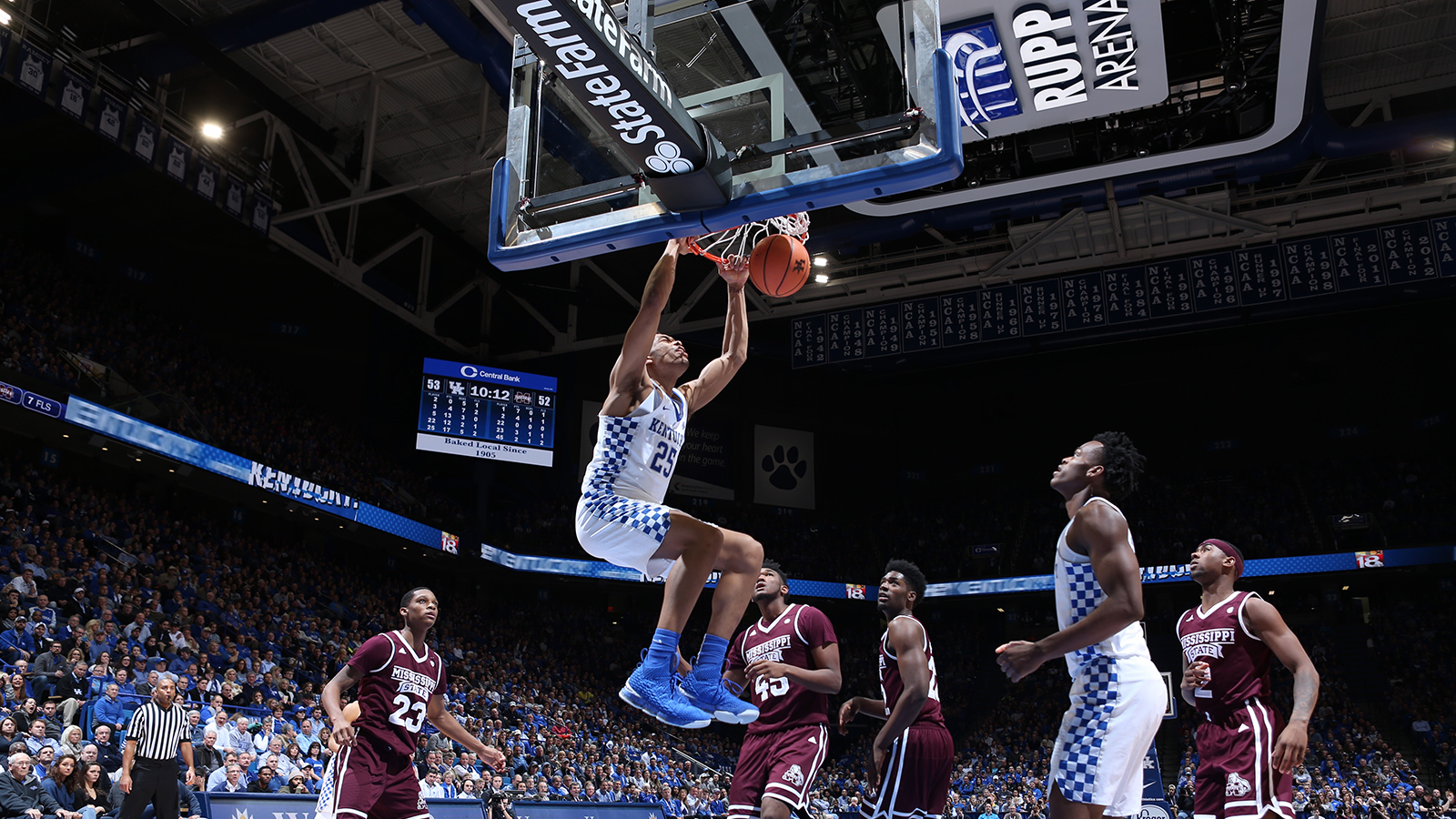 LEXINGTON, Ky. (AP) – Kentucky didn’t need to be pretty or dominating, just effective enough at the right times to break out of its recent slump.

Kevin Knox got things started with his jumper, PJ Washington created opportunities at the foul line and other Wildcats chipped in as needed to get it done.

Washington had a career-high 22 points, Knox scored 19 with four 3-pointers and Kentucky pulled away late for a 78-65 victory over Mississippi State Tuesday night to end a two-game losing streak.

A day after the Wildcats fell out of the Top 25 for the first time since March 2014 , freshman forwards Washington and Knox helped end their skid from the foul line and perimeter respectively. Washington made 10 of 14 free throws along with 6-of-10 shooting to top his previous best against Monmouth by two points. Knox overcame an initial missed layup to hit all four from behind the arc to finish 5-of-6 shooting from the floor and from the line.

He added that coach John Calipari ”says all the time that we’re too Hollywood, and we just have to be aggressive and bring toughness to the game.”

Shai Gilgeous-Alexander added 16 points, including eight in the second half to help Kentucky (15-5, 5-3 Southeastern Conference) eventually seize a back-and-forth game between schools coming off losses. The Wildcats shot 43 percent but made 23 of 30 free throws.

”We ground it out, we got the ball where we wanted to, we made layups and we made free throws,” Calipari said.

Quinndary Weatherspoon had 19 points and Nick Weatherspoon 10 for the Bulldogs (14-6, 2-5), who shot just 39 percent and were outrebounded 41-31 while losing their second straight SEC contest and fifth in sixth games.

Knox, whom Calipari would rather see going to the basket more, used open looks to make four of Kentucky’s five 3-pointers on 14 attempts. Sophomore forward Wenyen Gabriel had the other.

”I wasn’t really hitting shots,” Knox said. ”Nothing from the 3-point line, so it was good to see I made a couple.”

A brief moment of silence was held before tipoff to honor the victims and first responders of Tuesday’s fatal shooting at Marshall County High School in Benton, Kentucky. Two students died, 12 were wounded and five others injured in the shooting. Calipari, who has attended the Hoop Fest there, said news of the incident made him ”literally nauseous” and he added, ”There’s nothing I can say, other than I’ll be praying for them tomorrow at Mass. I’ll take Communion for them, light a candle for them.”

Mississippi State: The Bulldogs entered as one of the SEC’s top rebounding teams in league play, ranking fourth offensively at 12.2 and third defensively at 26.5 per game. They were even at 18 in the first half and outscored Kentucky 13-9 on second-chance points, but were beaten 23-13 after halftime. Still, they trailed just 68-63 with 3:15 remaining after Tyson Carter’s four-point play before Kentucky outscored them 10-2 the rest of the way, mostly at the foul line.

”It was disappointing because we had a golden opportunity going into the last few minutes of the game,” coach Ben Howland said.

Kentucky: After committing 33 turnovers in consecutive losses, the Wildcats improved slightly with just 11 against the Bulldogs and better composure down the stretch. Controlling the boards was key with Hamidou Diallo and Jarred Vanderbilt each grabbing seven while Knox, Washington and Gabriel had six each. They also defended the perimeter, holding MSU to 5-of-29 shooting.

Kentucky: Visits No. 7 West Virginia on Saturday in the Big 12/SEC Challenge.