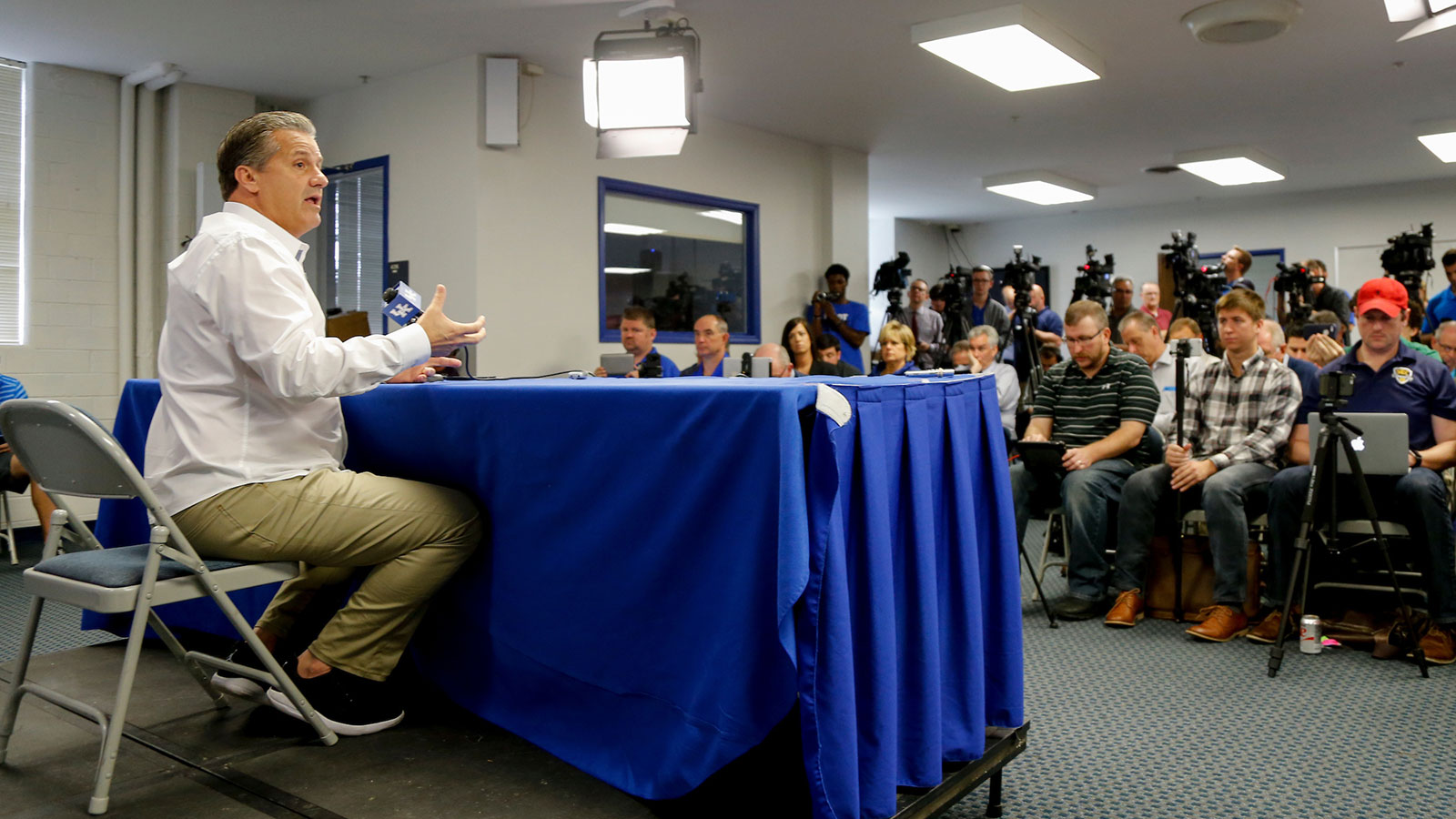 If you tuned in for Kentucky’s televised Pro Day on Sunday, you heard something that’s become familiar to the Wildcats early in practices ahead of the 2017-18 season.

Then, if you watched John Calipari’s press conference on Media Day, you heard it again.

“I stop every practice at some point and tell them to tell me to be patient,” Coach Cal said. ” ‘Coach, be patient. We’re good kids. We’re good players. We just don’t know anything. Be patient.’ “

Fielding a group that is his youngest to date – which is quite a feat considering his recent run of freshman-laden squads – Calipari is asking for frequent reminders of that fact from the Cats. They are obliging, though not necessarily with their words.

“The way we remind him is by making mistakes,” Wenyen Gabriel said, laughing. “He’ll see it at practice and he’s real good with that. He’s slowing down, helping us learn and we’re just trying to reach our potential.”

Nonetheless, Calipari faced nearly every conceivable question about how UK will play this season from the many, many media members gathered for the annual spectacle that is Media Day. They ranged from the kind of shooting team UK will have, to the versatility of the group, to whether any Wildcat has the star power of Malik Monk or De’Aaron Fox. He dutifully entertained each, but eventually added an important caveat.

“None of you know how we’re going to be,” Calipari said. “Not one. Some of you guys can act like you know, ladies, you know. You don’t. You know why I know that? Because I don’t know. This is what makes this Kentucky.”

The potential of this group is not in question. Everything else is. On the eve of Big Blue Madness, the goal is to start answering those questions. The first and most important one, though it wasn’t asked by anyone else but Calipari on Media Day, is only one word and three letters.

“What is your ‘why’?” Calipari said. “Bam’s (Abedayo) immediate ‘why’ was his mother. I got to do this because I got to take care of my mother, who was walking to work at a supermarket in Little Washington, (North Carolina). These kids come from all different kinds of backgrounds. They have all different things. Some of them better homes than others. But if you can get these young people, like Michael (Kidd-)Gilchrist, to (care) more about other people, then that becomes what this program is about. You continue to win even when the team keeps changing.”

To wit, Gabriel is the only holdover from last year’s team who played significant minutes and therefore is a sophomore “veteran.” He understands from firsthand experience that the goal is to be, as Coach Cal often says, “one of those teams” by the time games really matter. He also understands that every step along the way counts.

“We came in here, we know we’re not the team that we’re going to be in March yet,” Gabriel said. “It’s a step. We gotta get there, so it’s about taking each step and maximizing it because before you know it, it’s going to be March just like that. That’s how fast the season goes by. Since I already had a year into this, I know how it feels. Just making sure everyone focuses every day so we’re trying to become that team every day.”

Gabriel is surrounded by seven true freshmen trying to make their mark, plus midyear enrollee Hamidou Diallo and returners Sacha Killeya-Jones and Tai Wynyard. Molding such a group into a team can be overwhelming at times, Calipari admits, but days like Wednesday remind him there is light at the end of the tunnel.

“I’ve said other years, it’s a work in progress,” Calipari said. “We had a really good practice yesterday, and Kevin Knox was unbelievable. He made a little bit of a breakthrough yesterday. I had hope. I took my foot off the panic button yesterday after practice. I still got both hands on it, but my foot is no longer on it after yesterday’s practice.”

“I was really aggressive going to the basket,” Knox said. “I was knocking down shots, communicating on defense, rebounding the ball really well. Me and Hami did a really good job of that yesterday and Cal, he was really loving it. After practice, he said that was one of the best practices I’ve had.”

The maddening thing for Calipari is he has been trying to get Knox to do what he did Wednesday from the moment he arrived on campus. That’s the thing about freshmen though: You never know when the message is finally going to sink in.

“Yesterday he just got it,” Calipari said. “That’s what happens. These kids, you’re asking them to do stuff they’ve never had to do. He got it.”

Now, Knox will surely have moments where he backslides. The same will happen for his teammates. Calipari, no doubt, will move his foot closer to the panic button again at some point. There might even been a puzzling loss or three along the way, but history suggests it’ll all be OK.

“This is what we do here,” Calipari said. “This is what it is. Wave of kids come in. They have no idea, I have no idea. We all grow together, figure this out. We make decisions based for them on the program or a system, what’s right for them, then we roll with that.

“You know what? We love on them, they love on each other. The stuff usually works out.”