After finishing the previous year with a second-round NCAA tournament loss on their home court, the 1957-58 Kentucky Wildcats, behind the starting lineup of Vernon Hatton, Johnny Cox, John Crigler, Adrian Smith and Ed Beck — known affectionately as the Fiddlin’ Five — lost two of their final five games and appeared an unlikely contender for the national championship. 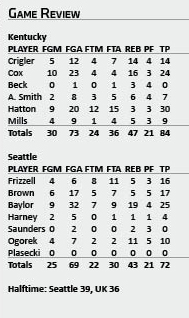 The Cats were led by Hatton’s 17.1 points per game and Cox’s 14.9 points per game. Hatton proved his effectiveness as a clutch player by sinking a 47-foot shot at the end of regulation to send UK into overtime against Temple, a game that the Wildcats would win 85-83 after three extra periods.  Kentucky breezed past the first two rounds of the NCAA Tournament, held in Lexington, with wins over Miami of Ohio and Notre Dame. UK then faced Temple in the next round and again won a close 61-60 decision.

The Wildcats defeated Seattle 84-72 in an anti-climactic national title, the fourth and final national championship for Adolph Rupp.

Led by Hatton and Johnny Cox, who finished with 24 points, the Wildcats twice battled back from 11-point deficits to gain the victory.

Trailing for much of the game, UK grabbed its first lead with 6:08 left when Don Mills hit a hook shot to give the Wildcats a 61-60 lead. Moments later, Cox hit a jump shot to make it 63-60 and UK never trailed again.

John Crigler added 14 points and 14 rebounds for the victors. Mills and Adrian Smith finished with nine and seven points, respectively.

Aside from Baylor, Seattle received 17 points from Charley Brown and 16 from Jerry Frizzell.