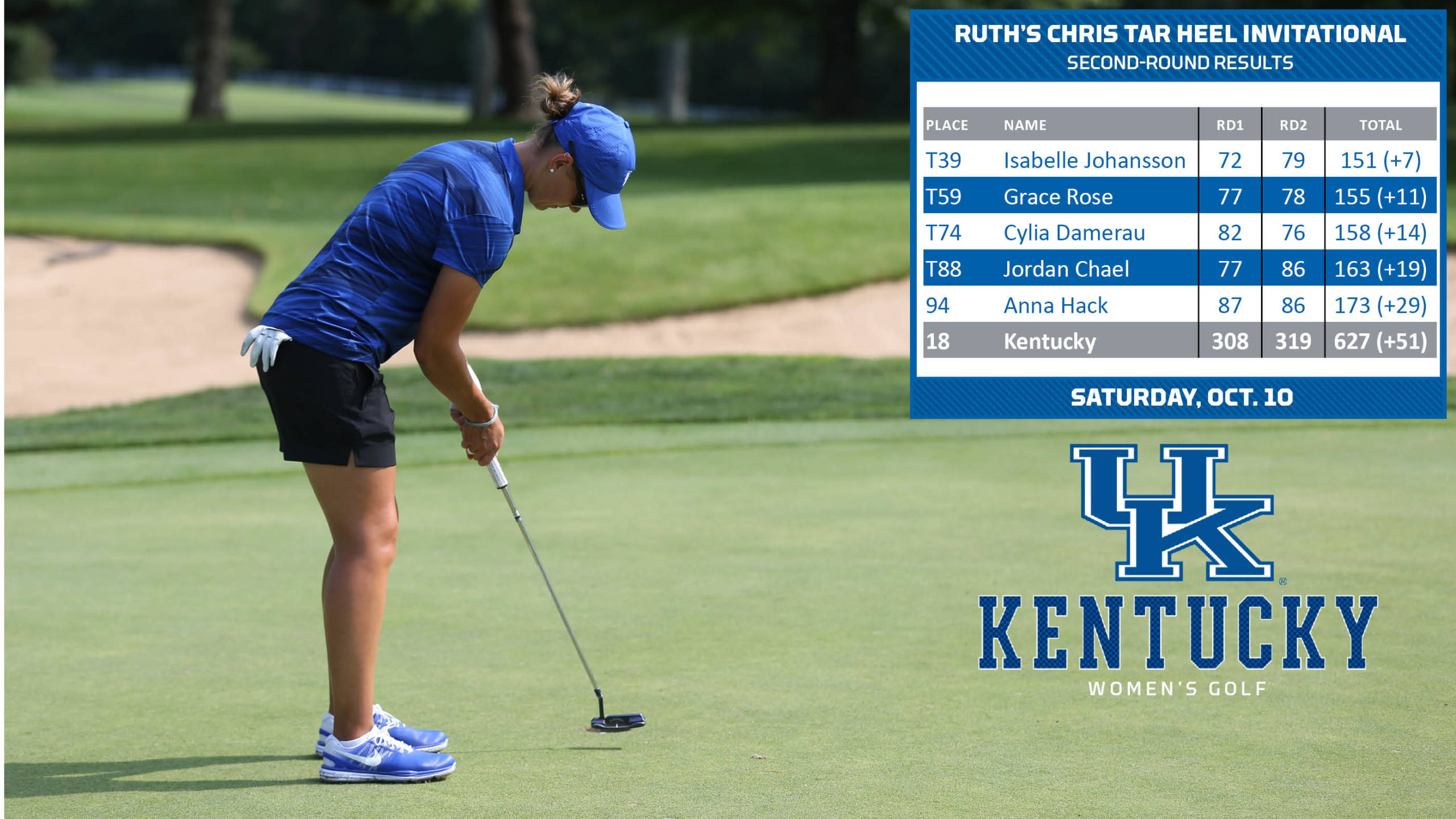 Damerau Rebounds with Best Round of the Season

CHAPEL HILL, N.C. – After a slow start to the 2015-16 season, a familiar face in Cylia Damerau led the Kentucky women’s golf team on day two of the Ruth’s Chris Tar Heel Invitational.

The senior from Switzerland rebounded from a tournament-opening 82 with a 4-over-par 76 in the second round. It marked the best round of the season for the senior, who did not play in Kentucky’s last tournament.

As a team, the Wildcats began to move up the standings early in the day, but a tough afternoon halted Kentucky’s progress. UK sits in 18th place at 51-over par with the final 18 holes set for Sunday at the UNC Finley Golf Course in Chapel Hill, N.C.

Duke, the defending tournament champion, leads the field at 2-over par. Leona Maguire, from Duke, leads all players at 3-under par.

Fans can continue to follow the action at golfstat.com. Play will resume Sunday at 9:15 a.m. with a shotgun start.

Damerau, who entered this season as Kentucky’s leading returner in terms of stroke average, returned to form with three birdies Saturday, including two in her first seven holes. Damerau’s second nine wasn’t as clean with five bogeys on the scorecard, but she ended the day nicely with a birdie on her final hole. She’s tied for 74th at 14-over par overall.

Sophomore Isabelle Johansson was among the leaders after the first round of competition but slid back to the pack with a 7-over-par second round. Nonetheless, Johansson sits in a tie for 39th after Saturday and will be seeking her third straight top-40 finish to start the season on Sunday.

Sophomore Grace Rose isn’t far behind Johansson at 11-over par after firing a 6-over 78 Saturday. Junior Jordan Chael, who recorded a top-10 finish to start the season, is in a tie for 88th at 19-over par, and freshman Anna Hack, playing in just her second collegiate tournament, remained in 94th place at 29-over par.

This week’s tournament marks one of the stiffest tests the Wildcats will face all year. Thirteen of the 18 teams in Tar Heel Invitational are ranked in Golfweek Magazine’s top-50 rankings. A remarkable 15 of the 18 teams in the tournament made last year’s NCAA regional field, including Kentucky. Perhaps more impressive is 10 of the teams in this year’s field were among the 24-team field at the 2015 NCAA Championship.

Located in Chapel Hill, N.C., the UNC Finley Golf Course is playing at 6,379 yards, par 72 this week. The current course was designed by Tom Fazio and opened in 1999.

Admission is free all weekend and the public is encouraged to attend.