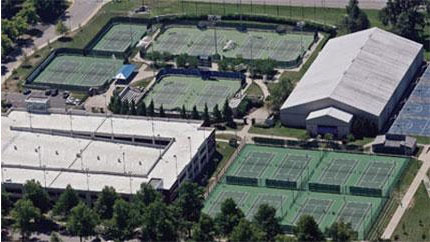 The University of Kentucky men’s and women’s tennis programs hold a competitive advantage over much of their competition thanks in large part to the fabulous amenities provided by the Hilary J. Boone Varsity Tennis Complex, which celebrated its 25th anniversary in January 2010.

The summer of 1997 marked the further expansion of the Boone Tennis Compex with the construction and dedication of the $1.5 million Hilary J. Boone Varsity Tennis Center. The facility features a 1,500-seat stadium for its two center courts with four additional hard courts. Funding was generated for the project through private donations as well as exhibitions featuring top tennis professionals Martina Navratilova, Jennifer Capriati, Jim Courier and John McEnroe.

In addition to the exhibitions, a bulk of the private donations were derived from the Ryan C. Holder Memorial Tennis Fund. Holder, a 16-year-old Lexington Dunbar High School student, was killed in an automobile accident. Because of his love for the sport and desire to play collegiate tennis, a group of friends raised $425,000 to complete the funding necessary to construct the stadium which houses the Ryan C. Holder Center Courts. The center courts were dedicated in Holder’s memory on Aug. 3, 1997.

“We are extremely lucky to have the facilities that we do here at Kentucky,” head coach Cedric Kauffmann said. “Every summer we have the $100,000 Fifth-Third Tournament and every fall we host a tournament in the new stadium. The complex gives us the ability to host large events or move indoors due to poor weather conditions. We are very lucky to have this unique facility.”

In 1993, renovations were finished as a complete weight room and locker room facilities were installed.

The University of Kentucky tennis facilities are a major reason for the great success of both the men’s and women’s squads. The Hilary J. Boone Indoor Center and the adjacent Dr. W.H.H. Downing Recreation Tennis Courts have also played a key role in helping the Kentucky tennis teams become collegiate powers. The indoor center also was a gift from Boone.

The Boone Indoor Center, which opened in January 1986, is equipped with four courts and has seating for 1,500 people. A UK Tennis Hall of Fame has also been added and contains trophies and pictures depicting Kentucky’s storied tradition. During the spring of 1989, the Indoor Center hosted the SEC Indoor Championships, the Hilary J. Boone Invitational and the annual McDonald’s Classic.

“This Center has given us exactly what we need to compete on the national level,” Kauffmann said. “Not only are our teams able to train as we want, but the building allows us to play night matches and attract crowds, something we couldn’t do in the past.”

The recreation courts were named after the “father” of Kentucky tennis, Dr. H.H. Downing, who coached the UK men’s team for 29 years (1922-46 and ’52-’57). He coached longer than any other UK coach, with the exception of basketball coach Adolph Rupp, compiling a 174-110-5 record.

The complex features 18 courts, including eight recently resurfaced courts, with seating for more than 1,000 spectors. “We had the courts resurfaced and they are in top condition,” said Emery. “In 1993, we hosted the USTA Segment III professional tournament and it was a tremendous success. We’re looking forward to hosting more events in the future.”

In addition to the Fifth-Third Championships and the annual sporing home slate against the best that the SEC and the nation have to offer, the Boone Tennis Complex plans to host a varity of events throughout the year. For the past three years, UK has sponsored the Charles Fluitt Fall Invitational in memory of the late Charles Fluitt who was a victim of the 1996 Value-Jet crash in the Florida Everglades. He was the father of former UK tennis star Marcus Fluitt. To honor this fallen friend of UK tennis, Court No. 4 of the Boone Varsity Tennis Center was dedicated as the Charles Fluitt Memorial Court.

With much attention traditionally given to football and basketball in collegiate athletics, UK realizes that all of its student-athletes should play in the very best facilities possible. The Hilary J. Boone Varsity Tennis Complex is a never-ending stop in that direction.