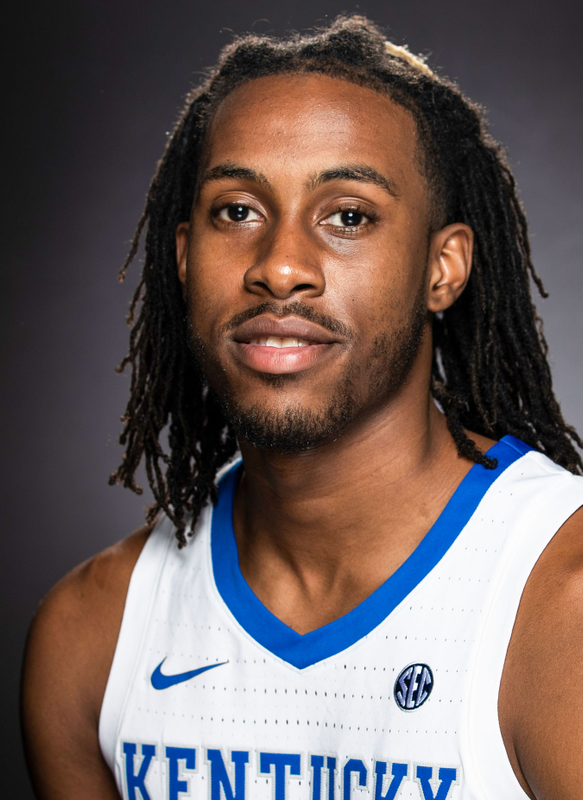 Freshman: Declared for the 2021 NBA Draft following the season and will forgo his remaining collegiate eligibility … Selected 22nd overall in the 2021 NBA Draft by the Los Angeles Lakers, the draft rights of which were traded to the Indiana Pacers …Named to the Southeastern Conference All-Freshman and SEC All-Defensive teams by the league’s coaches, the only Wildcat to earn conference honors … Elite shot blocker who developed into an offensive threat late in the season … Played in all 25 games and started 18 of them … Averaged 8.4 points, 6.6 rebounds and 2.6 blocks per game … Two double-doubles on the season … Led the team in blocks with 65, including nine games with three or more rejections … Led the squad in blocked shots in 20 of 25 games … Ranked first in the SEC in blocks per game and 15th nationally after conference tournament play … Compared favorably to UK’s past elite shot blockers with a block percentage of 12.7%, ranked eighth nationally heading into the NCAA Tournament … Also blocked 5.0 shots per 40 minutes, just behind the single-season paces of Anthony Davis (5.8 in 2011-12) and Nerlens Noel (5.5 in 2012-13) … Led the team with 165 total rebounds … Grabbed 12.7 rebounds per 40 minutes, among the best numbers of the John Calipari era … Recorded a team-high seven double-figure rebounding games … Also led UK in field-goal percentage at 54.0% … Finished the regular season strong with six straight games in double figures prior to the SEC Tournament … Averaged 14.3 points and shot 62.0% during that six-game stretch … Closed the regular season vs. South Carolina with his second double-double of the season, posting 13 point and 10 rebounds in 26 minutes of action … Scored 13 points and blocked three shots in just 24 minutes in the loss at Ole Miss … Recorded 11 points and swatted three shots in 15 minutes in the home loss to Florida … Thanks to an 8-for-9 day at the free-throw line, scored 16 points and added seven rebounds in the upset win at No. 19/20 Tennessee … Just missed out on a double-double with 15 points and nine rebounds in 21 minutes at Vanderbilt, making all five of his field-goal attempts … Named SEC Freshman of the Week, his first career honor, following the performances at Vanderbilt and at Tennessee … Career day in the home victory at Auburn with his first career double-double and a career-high scoring output … Scored 18 points on 5-of-8 shooting and an 8-for-11 day at the charity stripe … Also grabbed 11 rebounds to get the double-double, including five offensive boards … Stuffed the stat sheet in the loss at No. 18/17 Missouri with eight points, 10 rebounds, four blocks, a career-high-tying three steals and two assists … Hauled in 13 rebounds after halftime in the win vs. LSU, the most boards by a UK player since Nick Richards grabbed 16 rebounds vs. Arkansas on Feb. 26, 2019 … According to STATS, Jackson became the first player with 15 or more rebounds in fewer than 20 minutes played against a major conference opponent since VMI’s Eric Mann had 17 boards in 19 minutes against South Carolina on Dec. 28, 2000 … Scored 12 points on a perfect 6-of-6 performance shooting to go along with four blocks in the loss at Georgia … Posted 14 points and blocked seven shots in the home loss to Alabama in just 23 minutes of action …. Nine points, six rebounds and four blocks in the runaway victory at Florida … Rejected four shots and induced a career-high three steals in the double-overtime triumph at Mississippi State … Solid all-around game at Louisville with seven points, seven rebounds, three blocks and two steals … Three-game stretch vs. Richmond, Kansas and Georgia Tech with double-figure rebounds, the best stretch by a Wildcat in 2020-21 … One point shy of a double-double in the loss to Notre Dame with nine points and 12 rebounds, plus dished out a career-high four assists … Emerged onto the national scene with seven points, 12 rebounds and a career-high eight blocks in the narrow defeat to No. 7/5 Kansas … His eight blocks vs. Kansas was the most rejections in a game for any Wildcat since Willie Cauley-Stein blocked nine shots against Boise State on Dec. 10, 2013, and it was the most ever by a UK player vs. an Associated Press top-10 opponent in program history …Grabbed 14 rebounds in 25 minutes vs. Richmond.

Considered a five-star prospect by Rivals, where he is ranked the No. 28 overall player in the class … Averaged 19.7 points, 13.0 rebounds, 7.7 blocks, 3.3 assists and 2.1 steals per game for Waterford Mott his senior season … Michigan All-State Division I (Associated Press) recipient and finalist for the Mr. Michgan Basketball award … Three-time All-State selection and four-time defensive player of the year in his conference … Led his high school to two district and two league championships … During the Nike Elite Youth Basketball League in 2019, averaged 11.0 points, 6.2 rebounds and 2.7 blocks per game … Considered one of the best defenders in the class … Was named to the Jordan Brand Classic.

Born Jan. 10 in Pontiac, Michigan … Parents are DeUngela and Wesley Jackson … Has four siblings, Wesley Jr., De’Dra, Jah and China Evens … Nickname is Zeek … Major is undeclared/exploratory studies in agriculture … Honor-roll student … His family is his biggest influence … Lists the Incredible Hulk as his favorite movie … Considers his favorite basketball memory to be his first dunk, which he did in the eighth grade at a basketball camp in Rochester, Michigan … Favorite food is chicken … Chose Kentucky over Alabama and Syracuse … Lists his favorite former UK players as Anthony Davis and Karl-Anthony Towns.