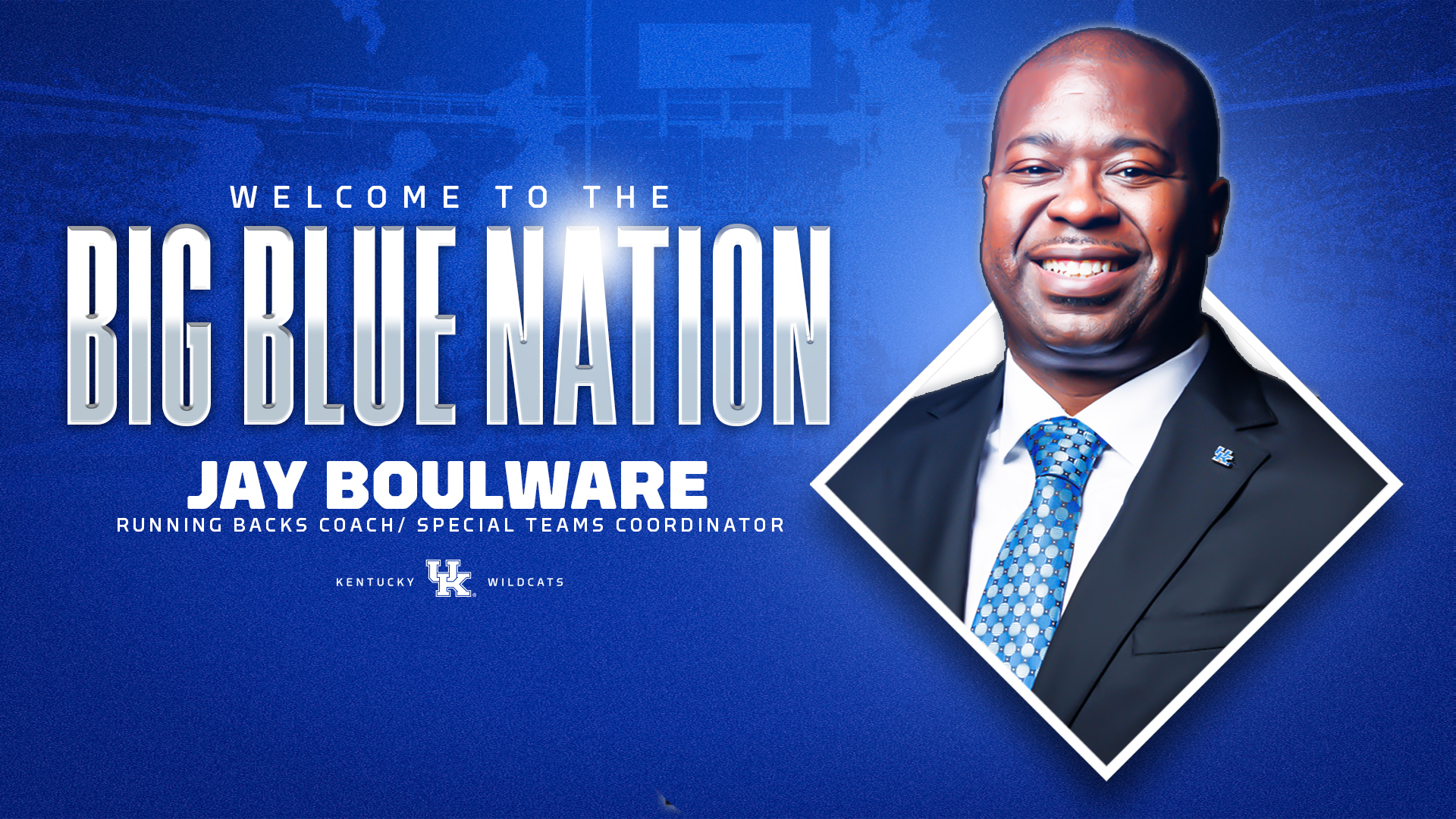 “I’m thrilled to add Jay to our staff at Kentucky,” Stoops said. “I’ve known Jay from his time with my brother, Bob, at Oklahoma. I’ve always been impressed with him and his work ethic. He brings a wide range of experience coaching running backs and in recruiting, along with his expertise and success with special teams. That’s what I was looking for in this position and Jay is well-regarded in all those areas.”

Boulware, originally of Irving, Texas, brings a plethora of success to the Commonwealth as he has more than 25 years of coaching experience and has been a part of 16 teams that advanced to bowl games. Most recently, he served as an offensive intern in the National Football League for the Pittsburgh Steelers, working specifically with the running backs, including UK’s all-time leading rusher, Benny Snell Jr.

Before the Steelers, he served as the associate head coach for special teams and tight ends coach at Texas, helping the No. 19 Longhorns finish 7-3 overall and capture the Alamo Bowl title in 2020.

“I want to thank Coach Stoops for giving me this amazing opportunity,” Boulware said. “I’ve known and worked with the Stoops family for many years, and I’ve followed Mark’s career for a long time. I’m honored to be on his coaching staff as I have the utmost respect for him and the work he’s done at Kentucky. I’m looking forward to helping him continue the success he’s built here in the Bluegrass.”

Prior to Texas, he spent seven years at Oklahoma, working under then-head coach Bob Stoops from 2013-16 and Lincoln Riley from (2017-19) as the special teams coordinator along with serving five seasons as the running backs coach and two years as the tight ends coach. Under his tutelage, the Sooners’ special teams produced 10 touchdowns, a safety and three returned two-point PATs.

The Sooners’ special teams ranked in the top 40 nationally in kickoff return defense (33rd/19.21 ypr) and net punting (31st/40.16 ypp). Placekicker Gabe Brkic did not miss a field goal (17-of-17) or an extra point (52-of-52), led the nation with a perfect field goal percentage and was a Lou Groza Award semifinalist.

Boulware presided over a 2018 running backs group that helped Oklahoma lead the nation in yards per carry (6.6). Brooks ranked third nationally with 8.9 yards per rush (minimum 9.0 carries per game) and was a USA Today Freshman All-American (1,056 rushing yards and 12 touchdowns), while Sermon ran for 947 yards and 13 TDs.

Kicker/punter Austin Seibert, who in 2018 was named Oklahoma’s first-ever Big 12 Special Teams Player of the Year, finished his career as the all-time FBS scoring leader among kickers, as his 499 points set school and Big 12 records. He went on to be drafted in the fifth round by the Cleveland Browns.

The Sooners won the Big 12 championship in 2018 and ended the season in the Orange Bowl (CFP Semifinal) vs. Alabama with a 12-2 overall record and a top-five finish in the national polls.

In 2017, Oklahoma led the Big 12 with 217.8 rushing yards per contest. Running back Rodney Anderson ranked 20th in the nation in rushing yards per carry with 6.28, 26th with 13 rushing touchdowns and 35th with 1,161 rushing yards. The Sooners also won the Big 12 championship that season, concluding the season with a No. 3 ranking and an appearance in the Rose Bowl (CFP Semifinal) vs. Georgia.

Boulware oversaw one of the nation’s top running back tandems in 2015 and 2016, resulting in Samaje Perine and Joe Mixon both declaring for the 2017 NFL Draft. Perine, Oklahoma’s all-time rushing leader (4,122 yards), ran for 2,409 yards and 28 TDs after Boulware moved to running backs coach, while Mixon ran for 2,027 yards and 17 TDs his last two years. Mixon also caught 65 passes for 894 yards and nine TDs.

Boulware served as tight ends coach at Oklahoma in 2013-14, helping former quarterback Blake Bell become a fourth-round draft pick as a tight end, a position he had never played prior to 2014.

On special teams, he mentored RB Alex Ross, who finished third in the nation on kickoff return yards (31.2 average) in 2014 and tied for second among FBS players with two kickoff return touchdowns.

Kicker Michael Hunnicutt concluded his career under Boulware as the all-time leading scorer in Oklahoma history at that time with 450 points, which ranked sixth in FBS history. Hunnicutt made a Big 12-record 75 career field goals, set an Oklahoma single-season record with 24 made FGs in 2013 and was named a Lou Groza Award semifinalist.

In the summer of 2014, he took part in the NFL Minority Coaching Fellowship Program with the New Orleans Saints.

Before Oklahoma, Boulware spent four seasons (2009-12) at Auburn as the tight ends coach and special teams coordinator, where he was part of then-head coach Gene Chizik’s staff that inherited a team coming off a 5-7 record in 2008. Two seasons later, the Tigers posted a 14-0 record capped by a 22-19 win over Oregon in the BCS Championship Game. Boulware’s star pupil at tight end while was Philip Lutzenkirchen, a second-team All-SEC selection in 2011 who set the school’s record for career touchdown receptions for a tight end with 14.

Additionally at Auburn, Boulware recruited the SEC’s all-time leading scorer Daniel Carlson. The All-American placekicker set 14 Auburn kicking records and was a Lou Groza finalist three times. He earned the SEC Special Team Player of the Year award two straight seasons and went on to be drafted in the fifth round by the Minnesota Vikings in the 2018.  He currently kicks for the Las Vegas Raiders.

Prior to Iowa State, Boulware worked for two seasons as tight ends coach/co-special teams coordinator at Utah (2005-06) under head coach Kyle Whittingham. While at Utah, his special teams units were among the Mountain West Conference leaders, including a Utah kickoff return unit that led the MWC in 2006. His time at Utah was preceded by a one-year stint as running backs coach at Stanford in 2004.

During the summer of 2004, he was part of the NFL Minority Coaching Fellowship Program with the San Francisco 49ers.

Boulware spent three seasons at Arizona under head coach John Mackovic as tight ends coach (2001), running backs coach (2002) and running backs coach/special teams coordinator (2003). During his tenure with the Wildcats, he mentored running back Mike Bell who finished his collegiate career with 3,163 rushing yards, the third-highest total in school history, and was named second-team All-Pac 10 as a sophomore.

Boulware began his full-time coaching career at Northern Illinois, where he coached tight ends (1997) and served as co-offensive line coach (1998-2000). One of his star pupils with the Huskies was Ryan Diem, who spent 11 seasons as an offensive lineman with the Indianapolis Colts.

Boulware, 50, was an all-state selection at Nimitz High School in Irving, Texas who played both the offensive and defensive lines. He went on to play for the Texas Longhorns as an offensive lineman in 1991. After redshirting his first year and seeing action as a reserve in 1992, he was contending for a starting position before the 1993 season but was forced to end his career after being diagnosed with cardiac arrhythmia. He went on to begin his coaching career at Texas, first as a student coach (1994-95) and then as a graduate assistant (1996). He helped UT win at least a share of three conference championships and a bowl berth in all three of his seasons working with the staff. Texas tied for the Southwest Conference Championship in 1994, won the final SWC title outright in 1995 and knocked off No. 3 Nebraska to win the first-ever Big 12 Championship in 1996. Those teams advanced to the 1994 Sun Bowl, 1995 Sugar Bowl and 1997 Fiesta Bowl.

Boulware graduated from Texas in 1996 with a degree in economics. He and his wife, Chantay, have one daughter, Jordin.

Jay Boulware’s Coaching Career (note: bowl games refer to the year of the regular season and not actual date of game if played in January)