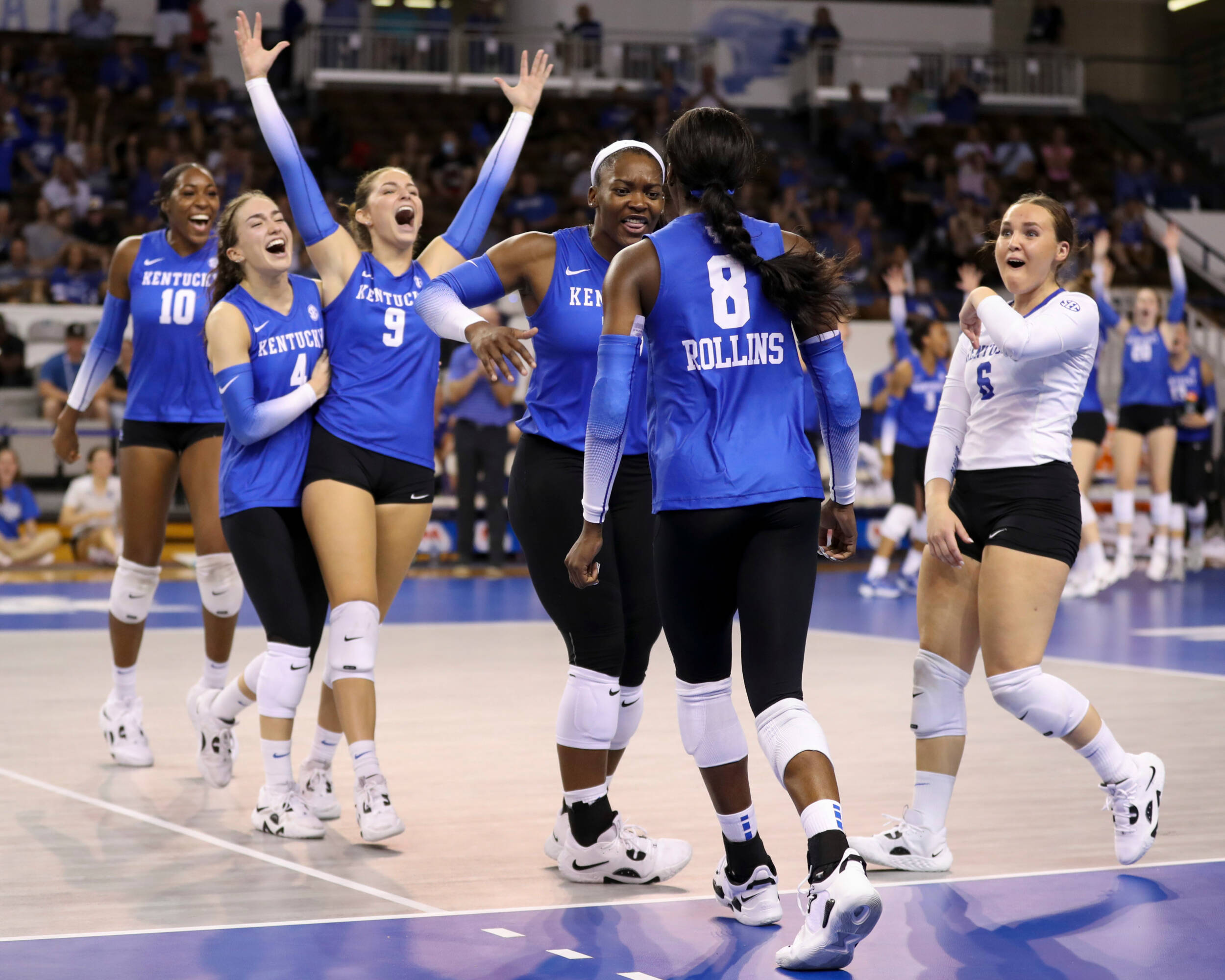 The Wildcats hit .400 as a team for the match paced by Rutherford’s 25 terminations, nine more than her previous career high of 16 set back in 2021. Adanna Rollins was the other UK player in double-figures scoring with 10 kills in the match.

Defensively, Kentucky held Creighton to just a .133 hitting percentage in the match, including a -.150 mark in the third set, in which UK won, 25-5. Emma Grome helped the Wildcat defensive effort with 14 digs in the match to go alongside her 48 assists, with Eleanor Beavin also adding in a match-high 19 digs in Saturday morning’s contest.

Kentucky will face No. 25 Southern California later on Saturday at 6 p.m. ET on FLOsports to close out the 2022 Bluejay Invitational in Omaha.

Kentucky won four of the first five points in the match thanks to good serving, but Creighton slowly worked its way back into the set by winning five-straight points to take a 9-6 lead, including three aces in that stretch as Kentucky called its first timeout, trailing by three for the first time all afternoon. Creighton’s lead grew to as many as five after a miscommunication along the frontcourt at 15-10, but a run of three in four points for UK closed the Bluejay lead to 16-13. The three-point gap was as close as Kentucky would get in the set as Creighton grew its lead to five in the next two points and closed out a 1-0 lead in the match thanks to a 25-19 opening-set win. The Bluejays hit .467 in the opening set with five players for CU registering two or more kills. Kentucky struggled in the serve/pass battle and hit .424 despite it, with Reagan Rutherford logging six kills in the frame.

Set two started much brighter for Kentucky as Haley Melby and Reagan Rutherford powered UK to a 7-3 lead and forced a Creighton timeout. The Wildcats used great defense including blocks by Goetzinger, Rutherford and Melby all in a five-point stretch to balloon the lead to 17-10, its largest lead of the match. Rutherford recorded her 11th kill on just 19 swings without an error to give Kentucky the 21-12 lead and prompted Creighton into a timeout, its second of the set. A Goetzinger stuff block ended the set with Kentucky evening the match at 25-16. UK only had one attacking error through the opening two sets and Goetzinger recorded six blocks to lead the match, just two off her career high and tying her season high through the opening pair of sets alone.

The third set started out along the same lines as the second with Kentucky jumping out to an early lead and increasing it from there. The Wildcats had four aces inside the first 20 points of the frame and took a 6-2 lead after an Azhani Tealer block followed by an Adanna Rollins ace. The Rollins ace made it a 10-2 UK lead as the Wildcats had an 8-0 run on her serve, its largest scoring run of the set. Kentucky then got back-to-back kills from Reagan Rutherford to notch her career high with 17 kills and no errors and Creighton called its second timeout, trailing 17-5. Kentucky closed the set on a 9-0 run and took a 2-1 lead in the match thanks to a 25-5 third-set win. In the third set alone, UK hit .579 and held CU to -.150 with UK notching six service aces in the set alone and forcing Creighton into six attack errors.

The Wildcats and Bluejays were back-and-forth in the beginning stages of the fourth set with no team garnering more than a two-point lead until Reagan Rutherford’s 23rd kill of the afternoon pushed Kentucky to a 17-14 lead and prompted CU into a timeout. Creighton then was stuffed at the net by Azhani Tealer who solo blocked her second ball of the morning to make it 18-14 and the Wildcats were off and running to the finish. A critical challenge win by Craig Skinner gave Kentucky a four-point lead late in the set and Creighton called a timeout trailing 23-18 with UK two points from the finish line. Kentucky closed out the set off a replay review and took the match, 3-1.