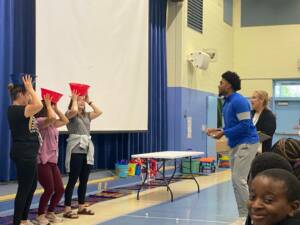 Junior defensive back Jalen Geiger has been nominated for the 2022 Allstate American Football Coaches Association (AFCA) Good Works Team®, it was announced Wednesday. He is one of 114 student-athletes– from divisions across the nation – who have been nominated because of their stories of exemplary community service, alongside their academic dedication and impact on and off the field.

Geiger, a product of Columbia, South Carolina, grew up in a military family as his dad, Tony, was a Chief Warrant Officer (CW3) in the United States Army for 21 years with five combat deployments, while his mom, Ramona, retired as a First Sergeant (E-8) after 25 years of service with three combat deployments in the Army. Due to his parents’ military service, Jalen attended six different schools from kindergarten through 12th grade. He knows a thing or two about what it feels like to be the new kid in class and how hard it can be to make new friends. Because of his background, Jalen has a passion for helping elementary school-age children so they don’t feel alone and he uses his platform as a football player to help kids in need. In 2021, he found a mentorship opportunity at Liberty Elementary in Lexington, Kentucky. He visited the school on several occasions, playing with the kids and talking to them about learning and trusting their teachers. He will continue that work in 2022 with plans to talk more to the kids about anti-bullying and being kind to one another.

“Everyone that has met Jalen is so very impressed with everything about him,” Liberty Elementary Child Guidance Specialist Bethany Dewsnap said. “He takes his role as a mentor seriously and encourages our students to be great. He talks to them about the importance of learning and taking advantage of the opportunities they are given, even when they have to work for it. When asked by the principal about working hard for Coach Stoops, he said he works hard because Coach Stoops believes in him and knows what he is capable of accomplishing. He related it back to trusting your teachers and working hard for them because they want you to be your best. Jalen is quiet in nature, but what he says really resonates with my students.”

Other community service events Jalen has volunteered for are below:

On the field, the 6-foot-1, 197-pounder, played in all 13 games last season with two starting assignments. He totaled 18 tackles, a tackle for loss, a quarterback hurry, a pass breakup and an interception for a touchdown.

The final 22-member team and honorary coach are selected by a voting panel of former Allstate AFCA Good Works Team members and journalists. They look for exceptional leadership on and off the football field.

After the final team members are announced in September, fans can vote for this year’s Allstate AFCA Good Works Team captain through the official page on ESPN.com. Fans can join the conversation on social media with #GoodWorksTeam throughout the season.

“These players embody the best of what college football stands for: character, selflessness and the willingness to serve and give to others,” AFCA Executive Director Todd Berry said. “The AFCA proudly stands alongside Allstate and each of these players’ families and communities to applaud their inspirational work off the field.”

Established in 1992, the Allstate AFCA Good Works Team is one of the most coveted community service awards in college football. From the 114 nominees, the final roster of 23 award recipients will bring together 11 players from the NCAA Football Bowl Subdivision; 11 players from the NCAA Football Championship Subdivision, Divisions II, III and the National Association of Intercollegiate Athletics (NAIA); and one honorary head coach. To be considered for a spot on the Allstate AFCA Good Works Team, each player must be actively involved with a charitable organization or service group while maintaining strong academic standing.