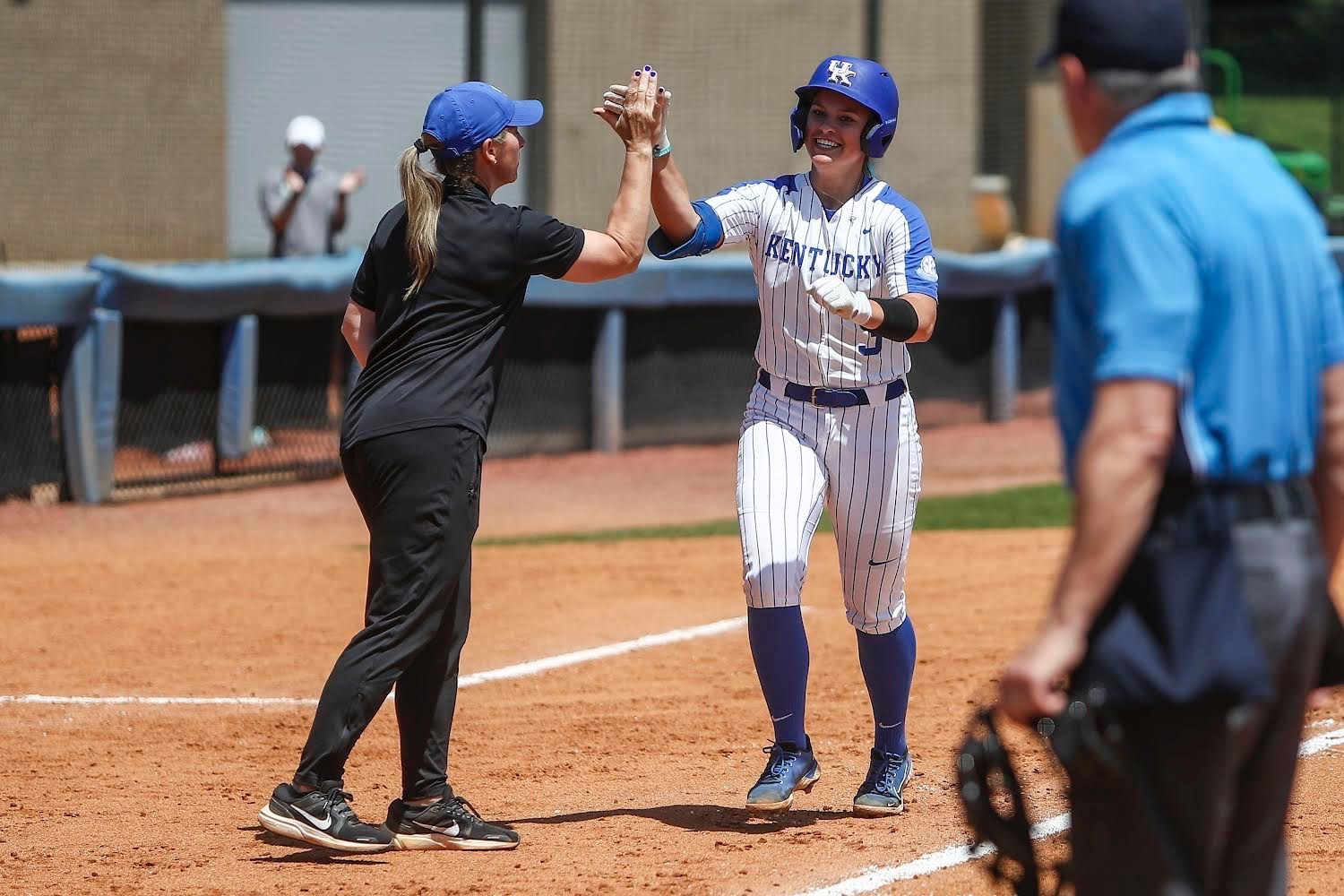 LEXINGTON, Ky. – Taylor Ebbs hit a three-run home run as part of six-run second inning and sophomore pitcher Stephanie Schoonover earned her sixth win of the season in the circle as the No. 11 Kentucky Softball team powered its way to a 9-5 win over Mississippi State to claim the series over the Bulldogs.

Kentucky’s offense exploded for six runs on six hits in the second inning, including a two-run bomb from Ebbs as she gave UK a 4-0 lead without UK recording an out in the frame. Meeko Harrison crushed her third home run of the season to right-center in the bottom of the fourth inning to give Kentucky the 9-1 lead.

Schoonover pitched great, allowing just three earned runs in four innings of work in the circle and striking out six Bulldog batters. Tatum Spangler pitched two innings in relief, only allowing one earned run and Alexia Lacatena pitched the final inning, allowing just one baserunner on a single into right.

Kayla Kowalik went 3-for-4 at the plate with three singles and a run scored, and Erin Coffel also had a multi-hit day for the Wildcats with two singles and an RBI on a sac fly in the Kentucky second.

To close the 2022 regular season, Kentucky will travel to South Carolina for a three-game series with the Gamecocks at the Carolina Softball Stadium beginning Friday night and running through Sunday afternoon in Columbia. Friday and Saturday’s games will be on SEC Network+ with Sunday’s series finale at Noon ET on the SEC Network.

Key Play
Ebbs’ three-run homer in the bottom of the second inning was the key play in the game to give Kentucky the 4-1 lead after the game was just tied on the prior play.

Key Stat
5. There were five players in the Kentucky lineup that had multiple hits in the game as Kayla Kowalik (3), Erin Coffel, Vanessa Nesby, Meeko Harrison and Taylor Ebbs (2) all had two-plus hits in the game.

Key Player
The key player in the game was Vanessa Nebsy, who went 2-for-3 in the game with two runs scored. Both of her hits were infield singles that she beat out with her lightning speed.

Run Recap
Mississippi State led off the scoring with an RBI single in the top of the second inning. MSU 1, UK 0

In the bottom of the second, Emmy Blane hit a one-run double to score Vanessa Nesby. Taylor Ebbs then hit a three-run bomb to right and two more scored on an Erin Coffel sac fly and RBI single into right by Miranda Stoddard. UK 6, MSU 1

Kentucky scored on an error in the third inning as Margaret Tobias scored after a lead-off walk. UK 7, MSU 1

Meeko Harrison launched a homer to right-center in the bottom of the fourth to increase UK’s lead by a pair. UK 9, MSU 1

In the top of the fifth, Mississippi State hit a two-run homer and scored a third run off an error by the Wildcats defense. UK 9, MSU 4

In the sixth, MSU loaded the bases and got an RBI single into LF to score a run. Spangler then got a groundout to Coffel to get out of the jam. FINAL – Kentucky 9, Mississippi State 5