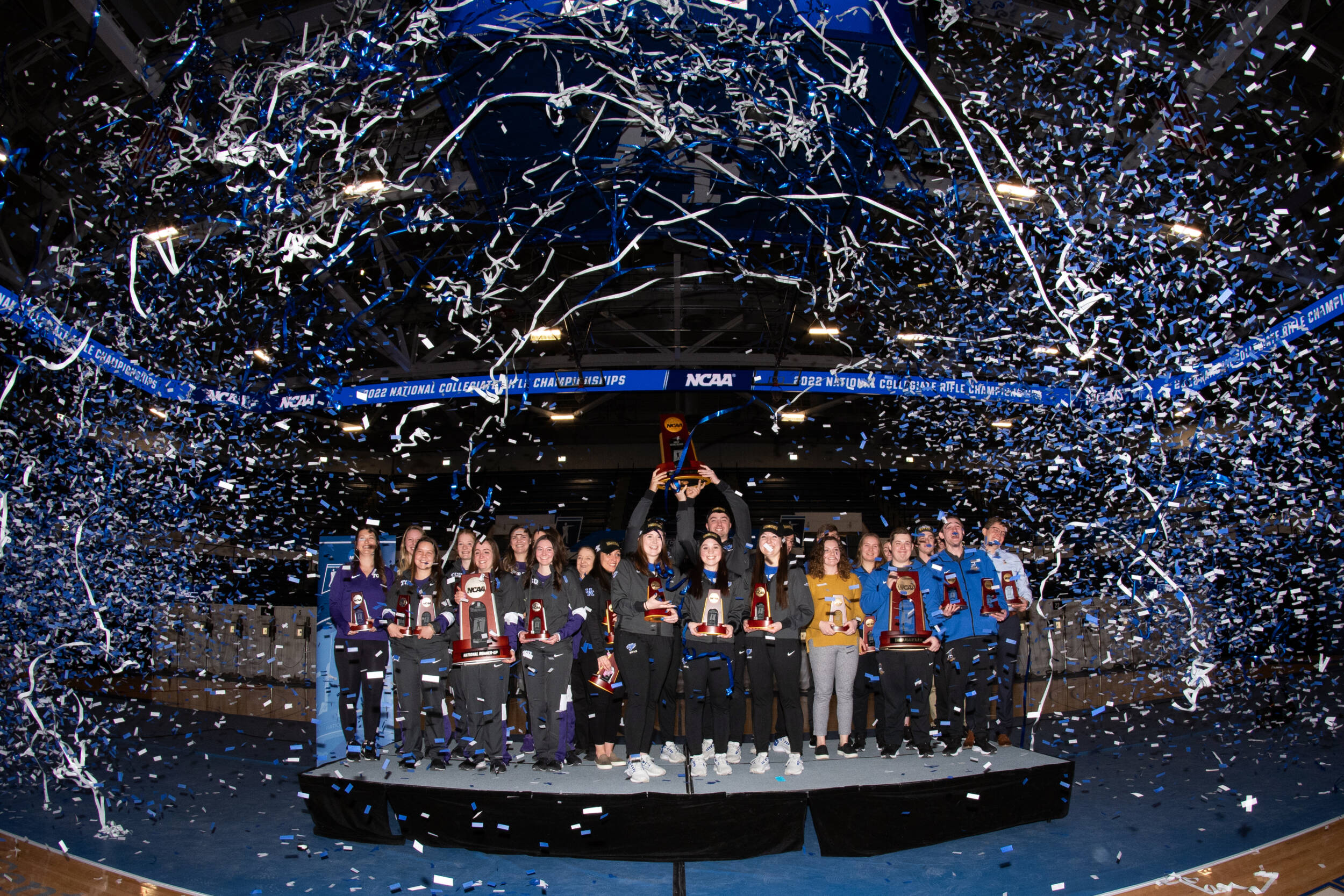 LEXINGTON, Ky. – Junior Mary Tucker set the tone early with a 598 and freshman Allison Buesseler showed her clutch gene with a perfect final 10 shots to clinch the win as the University of Kentucky rifle team claimed the 2022 NCAA National Championship on Saturday. The event took place in Clune Arena in Colorado Springs, Colorado.

The title came as UK scored a 4739 team score, which is the best team score at the NCAA Championships in the 60-shot era. The previous best was UK’s 4731 it scored to win the title in 2021. The Wildcats were in a great position to earn the title after a 2360 smallbore team score Friday. The Wildcats shot a 2379 air rifle Saturday for the win.

“I am very proud of the team and so happy to be bringing the national championship trophy back to Lexington,” UK head coach Harry Mullins said. “For them to post that high smallbore score yesterday and follow it up with another great all-around performance today was impressive. Mary, Richard and Will each did their job in the first relay of posting high scores to set the tone. Then Allison was just fearless in the final relay to bring home the high score and secure the win. Although five athletes came with us to Colorado Springs, this championship was a team effort that could not have been achieved without all nine athletes on the team, our amazing assistant coach Rena Curvey and some fantastic support staff. Thanks to everyone and can’t wait to show off this trophy to Big Blue Nation.”

Tucker was on target for the Wildcats in the first relay, putting a huge number on the leaderboard that helped set the tone for the Kentucky win. The native of Sarasota, Florida, scored a 598 overall, which was the highest score of any individual performer Saturday. She posted a 298 in her first 30 shots and finished the round with 30 straight 10s to secure the top score. Senior Will Shaner also posted 30 straight 10s to end his round, scoring a 595. Fellow senior Richard Clark scored a 594, completing the first relay.

Kentucky entered the second air rifle relay with a seven-point leading, needing a strong performance in the second relay to clinch the title. UK got that from Buesseler, who shot a perfect 100 in her final 10 shots to secure a strong 592 score and clinch the UK title. Junior Jaden Thompson also shot on the second relay, scoring a 583.

Tucker was the lone Wildcat to make the individual air rifle final, finishing second. Tucker posted a 248.9 in the final competition. Air Force’s Scott Rockett won the title. This was the second second-place finish in an individual final for Tucket on the weekend after she won silver in smallbore as well. Tucker was also the top aggregate performer at the event with a 1191. Shaner was second at 1187. This is the second straight year that Tucker has finished as the top aggregate performer.

Tucker also is the top aggregate finisher at the event. This is the second straight season she has been the top overall performer! #GoBigBlue pic.twitter.com/RYWt3bqDtZ