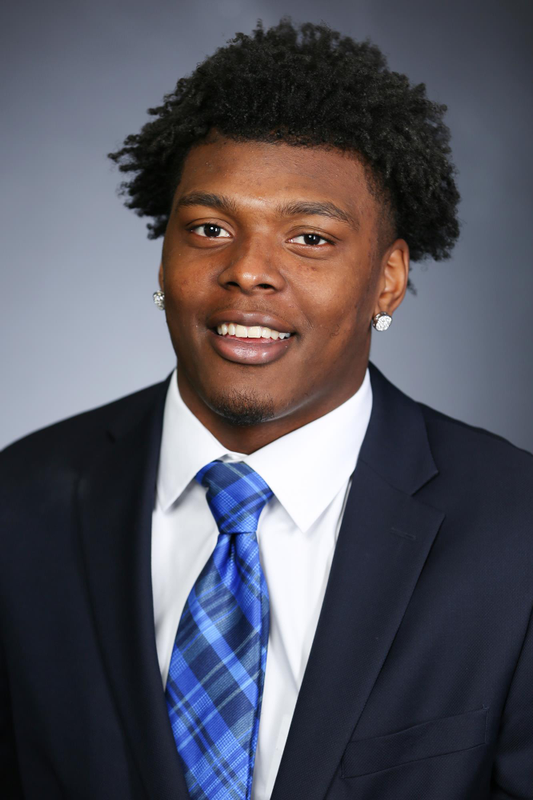 2019 – Sophomore
• Played in 12 of UK’s 13 games, with two starting assignments (Miss. State and Missouri)
• Did not see action vs. UT Martin
• Totaled 46 tackles (fifth on the team)
• Also had 2.5 tackles for loss, one PBU and one forced fumble
• Had five tackles, including two for loss (a career high), in the win over Virginia Tech in the Belk Bowl
• Led the team with eight tackles (six solo) and also caused a crucial fumble in Kentucky’s 29-7 win over Missouri
• Spearheaded a defense that held Missouri to season lows of seven points and 289 yards total offense … On 4th-and-1 from the UK 49, Oats’ tackle knocked loose a fumble that was recovered by the Wildcats … Two of his eight tackles came on third down, one forcing a punt and the other preceding a UK stop on fourth down
• Also totaled a career-high eight tackles at South Carolina
• Had seven tackles and 0.5 TFL at Georgia
• Started vs. Mississippi State and had five tackles
• Had five tackles in the season opener vs. Toledo, one which resulted in a targeting penalty
• Sat out the first half of the Eastern Michigan game … Had one tackle in the second half

2018 – Freshman
• Totaled 27 tackles, 3.0 TFL, 2.0 sacks, a forced fumble and two fumble recoveries in 13 games
• Posted a career-high five tackles and had his second quarterback sack of the season at Louisville
• Earned his first collegiate start at Texas A&M, charting his first collegiate sack in the second quarter … Ended the game with four tackles, including 1.5 for loss
• Also had four tackles in the win over South Carolina
• Recorded his first career tackle in the win over No. 14 Mississippi State

High School
• Four-star linebacker by all the major recruiting services
• Ranked the No. 22 outside linebacker in the 2018 class by 247sports
• Led Winton Woods to a 13-2 overall record and an appearance in the Division II state championship game as a senior
• Coached by Andre Parker
• Named the Division II Defensive Player of the Year and first-team All-Ohio by the Ohio Prep Sportswriters Association
• Totaled 79 tackles during the regular season and in five playoff games, had 60 tackles, including three interceptions and two touchdowns
• Reunites with high school teammate Mike Edwards
• Also a four-year letter winner in basketball as a center
• Chose Kentucky over Ole Miss, Oklahoma, Michigan State and Ohio State

Chris Says
• His nickname is “Deuce Deuce”
• Other than playing in the NFL, his dream job is to be a sports analyst
• Three words to describe him are kind-hearted, hardworking, and determined
• One thing people might not know is he likes to play the piano
• One sentence to describe Coach Stoops is “he wants the best out of his players”