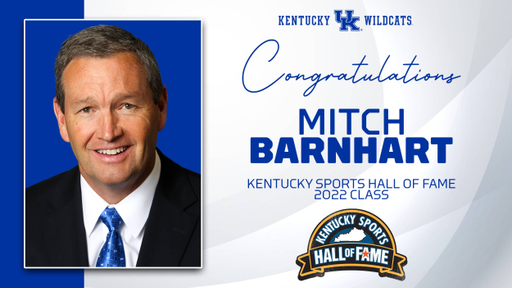 LOUISVILLE, Ky. –  Mitch Barnhart, current athletics director at the University of Kentucky, and Sue Feamster, a pioneer of women’s varsity athletics at UK, were inducted into the Kentucky Sports Hall of Fame (KSHOF) on Tuesday in a ceremony at the Galt House in Louisville.

Comprising the 45th KSHOF class are Barnhart, Feamster, Michael Bush, football star at Louisville Male High School, the University of Louisville and in the NFL in the early 2000s, and Dallas Thornton, basketball star at Male, Kentucky Wesleyan and the Harlem Globetrotters in the 60s, 70s and 80s.

A selection committee comprised of 17 sports media professionals from throughout the Commonwealth, along with the Bygone Era Selection Team, chose this year’s class. The KSHOF is owned and operated by the Louisville Sports Commission, a Kentucky-based non-profit whose mission is to attract, create, host and operate sporting events and activities that enhance the quality of life of the Commonwealth. The KSHOF was founded in 1963 to recognize athletes and sports figures who are Kentucky natives or who participated in their respective sport or made a significant impact in their sport in Kentucky.

Mitch Barnhart – Athletics Director at the University of Kentucky since 2002, Mitch Barnhart has led the Wildcats’ program to unprecedented success while also serving in leadership roles in college athletics. Under his watch, UK has earned top-20 finishes the last five years in the national all-sports standings, including a ninth-place finish in 2022 that is the highest in school history; six national championships (men’s basketball, women’s volleyball, rifle); 49 regular season and conference tournament championships, including first-ever Southeastern Conference titles in baseball, men’s golf, women’s tennis and women’s swimming and diving; a current streak of six consecutive football bowl games; 20 consecutive semesters of a department-wide 3.0 grade-point average; thousands of hours of annual community service; school records for student-athlete graduation rates; and perfect marks every year in the 18-year history of NCAA Academic Progress Rate. He also has overseen more than $300 million facility improvements and operated a balanced budget annually with no state or university funds. Barnhart was Chair of the NCAA Division I Men’s Basketball Committee in 2020-21, and working alongside the Committee and NCAA staff, led the successful implementation of a plan to stage the entire 68-team tournament in one city during the height of the pandemic. That same year, the UK volleyball and rifle teams won national championships. Barnhart has led the development of numerous programs that invest in the overall success of UK student-athletes during and after their years on campus, and he has served on the NCAA Division I Council and Division I Baseball Committee, served as chair of the NCAA Competition Oversight Committee and currently serves on the Collegiate Football Playoff Committee. In 2019 he was named Athletic Director of the Year by Sports Business Journal. In December, he will receive the John Toner Award, given for excellence in athletics administration, from the National Football Foundation and College Hall of Fame

Michael Bush – A two-sport star at Louisville Male High School, Michael Bush went on to a stellar football career as a running back at the University of Louisville (UofL), then played six seasons in the NFL. At Male, Bush twice earned the Paul Hornung Award as the state’s best prep football player, was named Mr. Football and Gatorade Player of the Year as a senior and was runner-up for Mr. Basketball, averaging 21.1 points and 10.5 rebounds per game. As a sophomore and junior, he amassed 3,031 yards and 37 touchdowns as a receiver and led the team in tackles. As a senior quarterback, he passed for 2,891 yards and 35 touchdowns and was a workhorse in the memorable 59-56 state championship loss to Trinity: he passed for 468 yards and six touchdowns, rushed for 116 yards and a score, caught two passes, recorded five tackles, and returned one punt and one kickoff. In three seasons as a running back at UofL, Bush rushed for 2,508 yards and 39 touchdowns and caught 50 passes for 651 yards and two touchdowns. He had six 100-yard rushing games in 2005 when he set a single-season school record for rushing touchdowns (23) that still stands. Bush played in three bowl games, including a dominating fourth quarter rushing performance in a 44-40 win over Boise State in the 2004 Liberty Bowl. As a senior, he rushed for 128 yards and three scores in the Cardinals’ season-opening win before suffering a season-ending injury in the third quarter. Bush was drafted by Oakland, and played four years for the Raiders and two with the Chicago Bears, recording 3,250 yards rushing and 29 touchdowns and 1,010 yards receiving and two touchdowns. 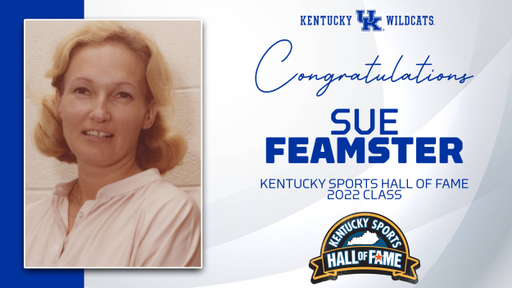 Sue Feamster – Starting in the late 1960s, Frankfort native Sue Feamster was a trailblazer in the advocacy for women’s participation in college athletics nationally, played a vital role in helping UK become a national leader in this area and was a champion for girls’ high school sports in Kentucky. She played tennis in high school when few sports were available for girls, then earned undergraduate and graduate degrees at UK where she worked with club and intramural sports for women. While still a graduate assistant at UK, Feamster was the mastermind behind a high school invitational tournament to determine a girls’ basketball state champion before the KHSAA implemented the Girls’ Sweet Sixteen. Feamster joined the UK faculty where she served on the Commission on Intercollegiate Athletics for Women (CIAW), founded in 1969 to govern women’s sports and sponsor national championships. When the CIAW transitioned into the Association of Intercollegiate Athletics for Women (AIAW), UK became a founding member. Feamster was one of the founding members of the Kentucky Women’s Intercollegiate Conference (KWIC) that provided college sports teams in Kentucky opportunities to compete in postseason tournaments starting in 1971 and served as the organization’s president 1975-77. After the passing of Title IX, Feamster developed a strategic plan for UK women’s athletics, then oversaw the administration of UK women’s athletic teams for several years; was head women’s basketball coach in the mid-70s; and as assistant athletic director (1978-86), developed programs and hired coaches for swimming and diving, tennis, volleyball, golf and gymnastics. On the national level, Feamster served on three powerful committees at the NCAA: the Special Legislative Committee, the Division I Steering Committee and the Television Committee. She also served as Secretary for the SEC Women’s Athletic Directors Council.

Dallas Thornton – Louisville native and Male High School alumnus Dallas Thornton was a star basketball player at the high school, college and professional levels. He was a four-year starter at Kentucky Wesleyan where he started a school-record 112 straight games and played for the 1966 and 1968 NCAA DII national champions and the 1967 runners-up. He was named to the NCAA All-Tournament team in ’67 and ’68 and earned first team All-American as a senior, second team All-American as a junior and third team All-American as a sophomore. He was invited to the 1968 Olympic Trials. Thornton averaged 17.5 points and 8.1 rebounds per game for his college career and was drafted by the Baltimore Bullets in the NBA and the Miami Floridians in the ABA. He played two years in the ABA then spent 17 years with the Harlem Globetrotters where he visited 75 countries, traveled the globe three times and performed at Queen Elizabeth’s 25th Anniversary celebration at Windsor Castle. He appeared in several TV shows as a Globetrotter, has a star on the Hollywood Walk of Fame and was the guest of two presidents at the White House. Thornton has been inducted into six sports halls-of-fame, including the National Small College Hall of Fame in 2021. Prior to Kentucky Wesleyan, Thornton was an outstanding four-sport star at Male High School. He earned prep All-American honors in basketball as a senior at Male High in 1964 averaging 16.5 points 14 rebounds per game. A three-time All-State selection in basketball during his prep career, Thornton also played football, threw a no-hitter in baseball and ran track as a sophomore and junior, leading Male to state finals in 880-yard relay. 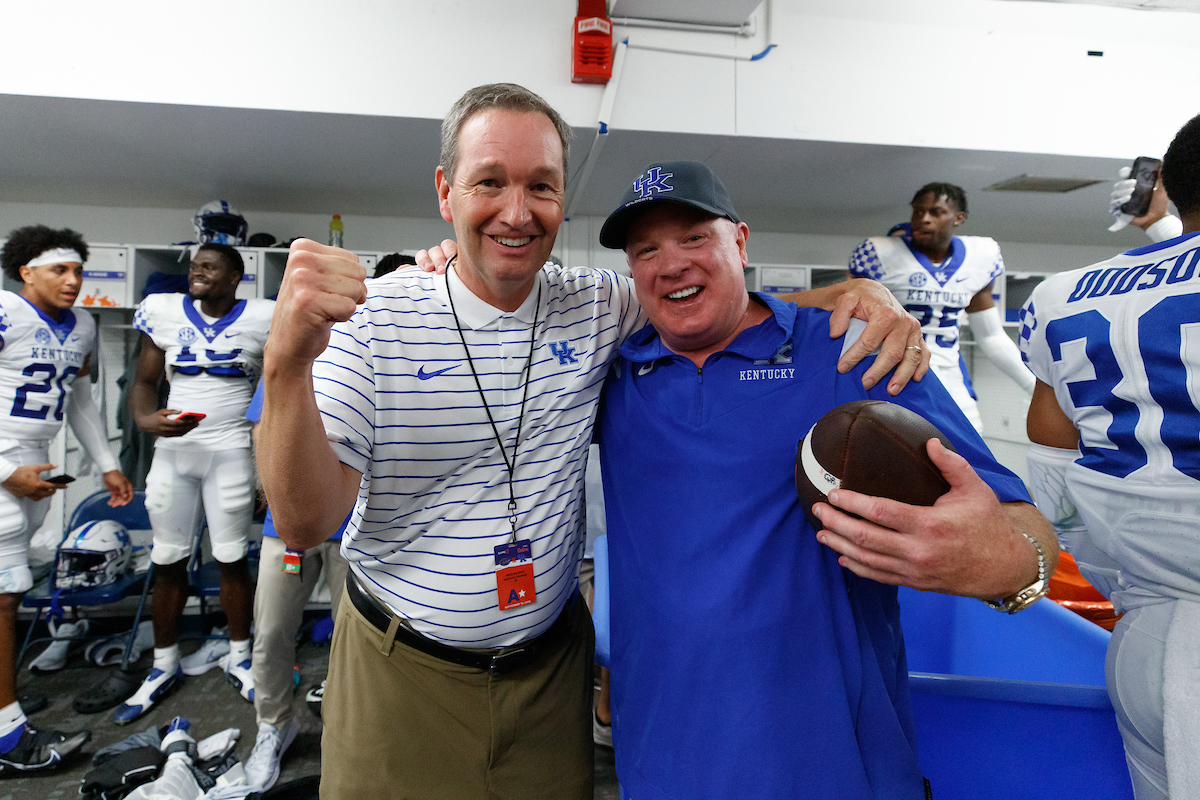