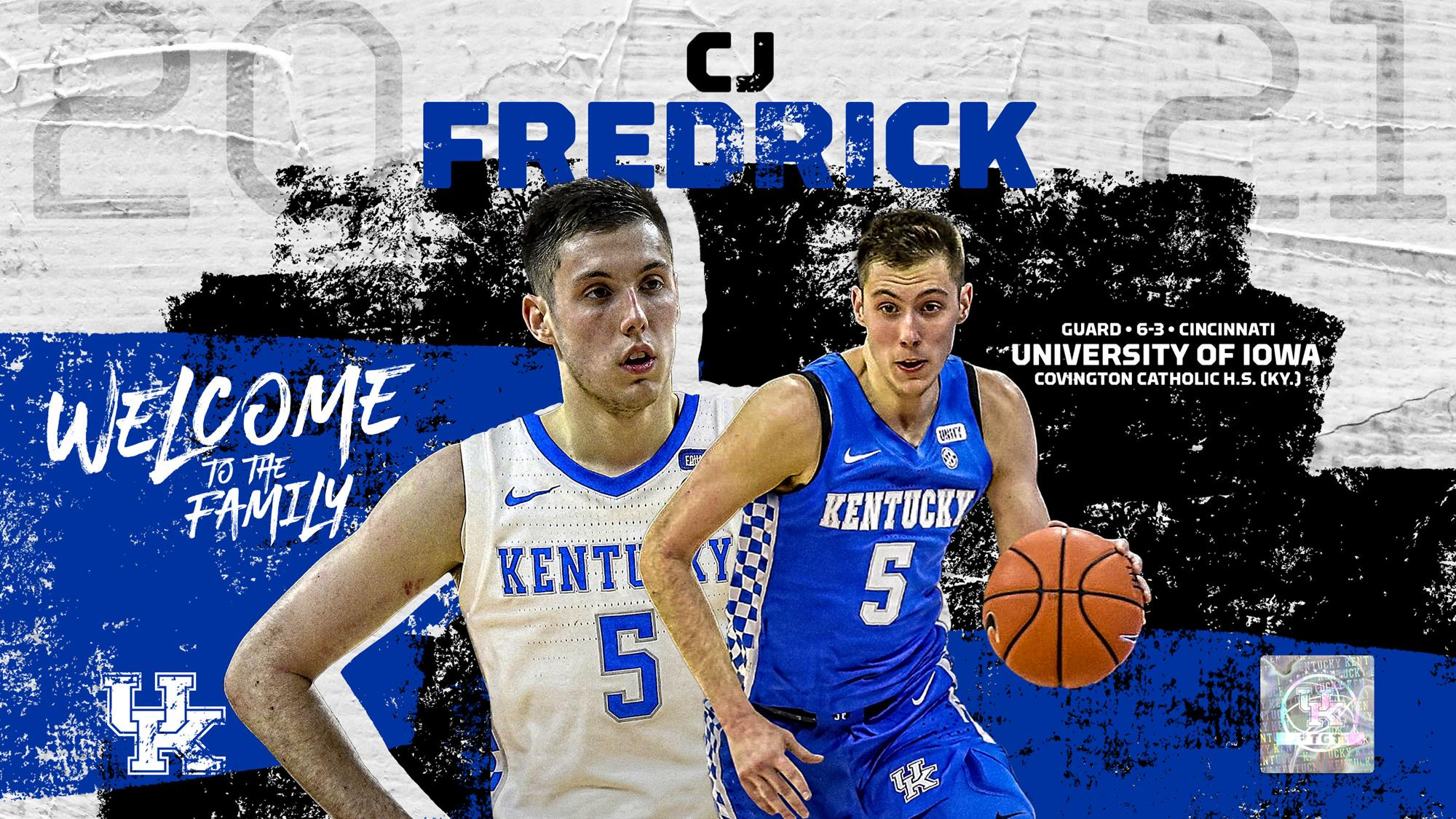 LEXINGTON, Ky. – Iowa transfer CJ Fredrick, a sharpshooter who made nearly 50% of his 3-point attempts in his two seasons of competition with the Hawkeyes, has signed with the Kentucky men’s basketball team.

Fredrick, a 6-foot-3 guard from Cincinnati, averaged 8.8 points per game in 52 appearances with Iowa.

He signed official paperwork with UK this week. Under a new NCAA transfer rule, which allows all student-athletes a one-time transfer with immediate eligibility, Fredrick will be immediately eligible for the Wildcats for the 2021-22 season.

“I am very excited for this new opportunity in my basketball career,” Fredrick said. “I really appreciate the confidence Coach Cal has in me. I am looking forward to going to work and developing as a player with Coach Cal, the staff and my future teammates. Thank you to Coach (Fran) McCaffery, the staff, my teammates and Iowa fans for three memorable years. I cannot wait to get back on the floor at Rupp Arena to help this team win and make Big Blue Nation proud.”

Fredrick is the third transfer Kentucky has added to its roster for next season over the last three-plus months. Forward Oscar Tshiebwe, a sophomore this past season, joined the program in late January from West Virginia, and Davidson guard Kellan Grady, a graduate transfer, announced his decision in late March.

“CJ Fredrick is an established college player from a terrific program who has competed at the highest level and has made big shots and big plays,” UK head coach John Calipari said. “As we all know, CJ is a terrific shooter, but what stuck out to make on tape is he takes care of the ball – he has an excellent assist-to-turnover ratio – and he can hold his own defensively. He guarded the best guard on the other team in just about everything I have seen.

“What I love about CJ is his approach in all of this. In every conversation I have had with him, he has a great plan of how he wants to improve and where he needs to take his game to get better. He wants to be challenged, he wants to be coached and he embraces competition.”

Fredrick is an elite shooter. He hit a combined 83 3-pointers on 178 attempts in his two collegiate seasons at Iowa, a 46.6% mark.

After redshirting in 2018-19, Fredrick made 47 3-pointers during the 2019-20 campaign and averaged 10.2 points and 2.8 assists per game. This past season, he tallied 7.5 points per game and made 36 treys but was limited in the second half of the season with a lower leg injury.

Fredrick’s 3-point percentage of 46.1% in 2019-20 led the Big Ten and was the best 3-point percentage by an Iowa freshman in school history. That mark went up to 47.4% this last season as a redshirt sophomore. He has 11 games with three or more 3-pointers.

Fredrick reached double-figure scoring 19 times in his Iowa career with four games of 20 or more points. He scored a career-best 23 points on a career-high-tying five 3-pointers at Minnesota on Christmas last year.

As a redshirt sophomore, Fredrick was an honorable mention All-Big Ten selection. He made the Big Ten All-Freshman Team in 2019-20. Fredrick was also Iowa’s Big Ten Sportsmanship Award honoree in 2021.

In Fredrick’s redshirt freshman season, he was one of only three players nationally – and the only one from a major conference dating back to 1993 – with at least 65 assists, 32 or fewer turnovers, and a 3-point percentage of at least 46%.

Signing with Kentucky will be a homecoming of sorts for Fredrick. The former Covington Catholic High School (Covington, Kentucky) star was named the 2018 Kentucky Gatorade Player of the Year and led his school to a Kentucky state championship and a 35-4 record. Fredrick averaged 23.1 points per game in his senior season and shot 48.4% from 3-point range. The march to the state title was done in Rupp Arena, where Fredrick averaged 27.8 points with two 32-point games while shooting 63.6% from the floor during the Sweet Sixteen run. He was named MVP of the Sweet Sixteen.

Kentucky’s 2021-22 roster continues to take shape. Freshman guards Brandon Boston Jr. and the late Terrence Clarke announced their intentions to declare for the NBA Draft and pursue a professional career, as did senior forward Olivier Sarr. Freshman forward Isaiah Jackson and graduate guard Davion Mintz have also entered their names in the draft but have indicated they are open to returning after going through the draft evaluation process.

In addition to the three transfers, UK added highly touted players in Daimion Collins and Bryce Hopkins, all consensus top-50 prospects, out of high school.  The five – and potentially more – newcomers will team up with some of the most significant roster returns in the Calipari era.