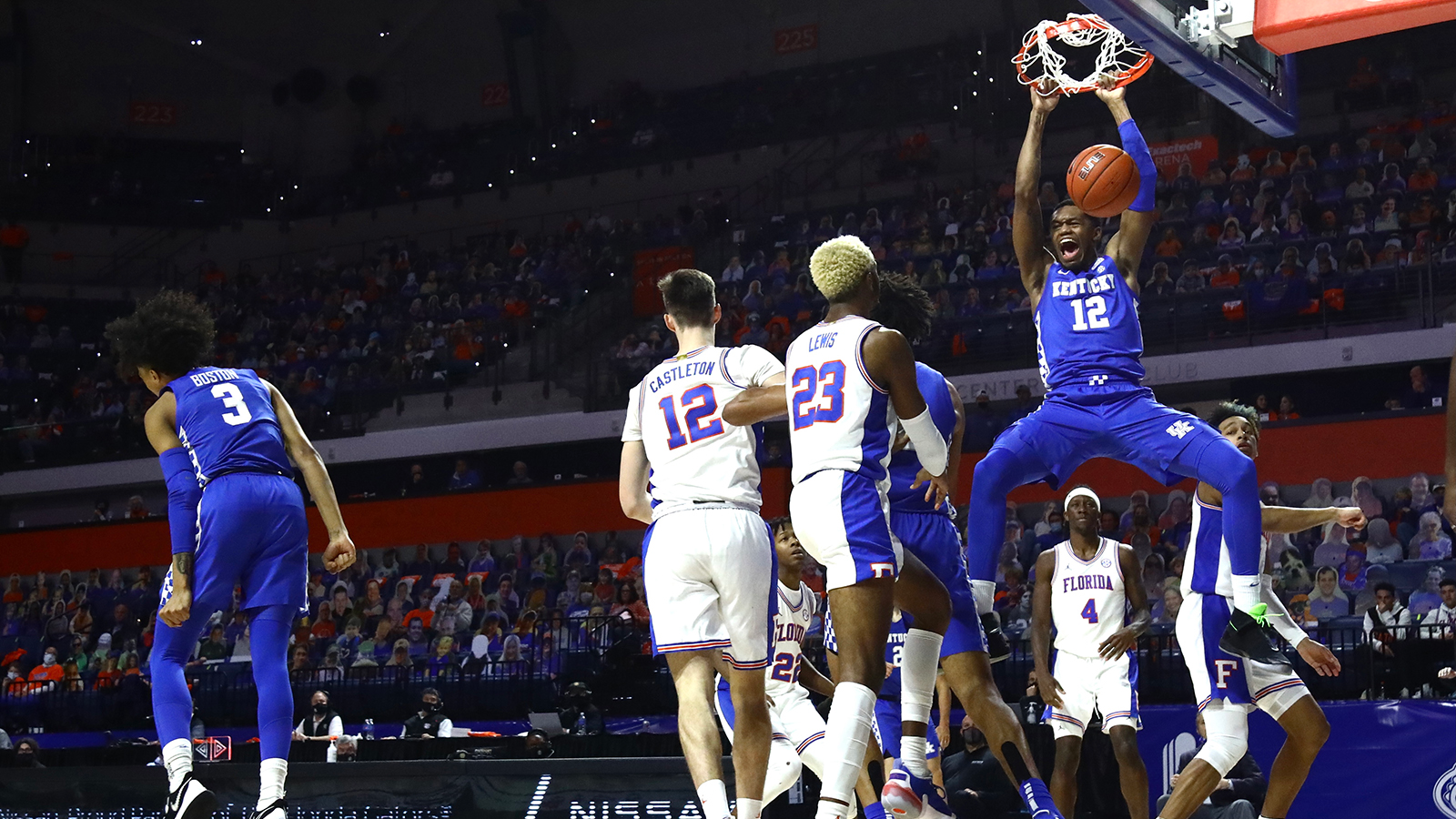 GAINESVILLE, Fla. – Just a day earlier, assistant coach Jai Lucas issued caution about Keion Brooks Jr.’s first game of the season: Don’t expect too much for a player who has missed the last three months with a left leg injury and practiced full-go for the first time just two days earlier.

If expectations were low before Brooks’ 2020-21 debut – one in which he seemed to transform the Kentucky offense and lead the Wildcats (4-6, 3-0 Southeastern Conference) to a 76-58 win at Florida (5-3, 2-2 SEC) on Saturday at Exactech Arena – what should they be now?

It was hard to find many faults with Brooks’ much-anticipated return Saturday in Gainesville, Florida. From the time he entered the game just over five minutes into the action and quickly threw down a dunk, hardly a moment passed without Brooks’ fingerprints on Saturday’s 18-point win, UK’s biggest in Gainesville since 1998.

Brooks scored 12 points on 6-of-8 shooting, grabbed six rebounds and dished out a game-high four assists in 25 efficient minutes. More importantly, he seemed to be the missing piece behind what’s been a struggling UK offense as the Wildcats pulled away from Florida in the second half with three different runs of 10-0 or more.

“He gave us a whole different element to the game,” teammate Davion Mintz said. “Keion was amazing today. It was super fun. I’m speechless, really. It was amazing.”

Brooks had four points, two assists, a rebound, a steal and a block in the first four minutes of the second half to lead a charge that Florida would never recover from.

It was a triumphant return for the only returning scholarship player who played last season but had not played in a game in 10 months. His last came on this very same floor, a game in which he helped engineer a magical 18-point second-half comeback victory in the 2019-20 regular-season finale.

That game was supposed to the spark for a postseason run, but just days later the SEC and NCAA tournaments were canceled due to the COVID-19 pandemic.

“I’ve always believed in my ability to come back and play well,” Brooks said. “I was constantly working out, staying in great shape. I have to give a huge shout out to our strength coach Rob Harris. I don’t even like to call him a strength coach. He’s way more than that. Not only did he do a great job of keeping me in shape but I spent a lot of time with him, so he was always in my ear making sure I was staying positive. The conversations we had, he really helped me get through what I was going through.”

Brooks, who averaged 4.5 points and 3.2 rebounds a season ago, seems to have taken a big leap from his freshman season. He stretched the offense with his ability to facilitate, took the Gators off the dribble and showed off his athleticism with three dunks.

When Brooks soared from just inside the free-throw line for a one-handed slam with 10:54 to go, Kentucky was well on its way to the sixth 3-0 start of the 12-season John Calipari era. The dunk was part of a 13-0 run that put the game out of reach for the Gators.

“He and I got emotional (when the doctors cleared him),” Calipari said. “I hugged him. I said, ‘We’ve got to figure out how we slide you in.’ He looked at me and said, ‘Coach, I trust you. You do whatever you think is best for this team.’ And I told the team that.”

“You saw the kind of athlete he is. You see that he’s way physically stronger than he was. Way more patient mentally. The game has slowed down for him.”

UK shot 55.6% and dished out a season-high-tying 18 assists in Saturday’s victory.

Brandon Boston Jr. bounced back from recent adversity with his best all-around game as a Wildcat: 13 points, four rebounds, and career highs with four steals and two assists.

With 13 points, Mintz scored in double figures for the fourth time in five games. Olivier Sarr added 10, and Devin Askew and Isaiah Jackson each pitched in with nine points.

“He can just do stuff other guys can’t do and so there are points in the game he needs to be in there,” Calipari said.

UK has now won five straight in the series and three straight in Gainesville for the first time since three consecutive wins from 2002 to 2004.

After the worst start in nearly 100 years, Kentucky has reeled off three straight games to set up an early-conference showdown with Alabama on Tuesday for sole possession of first place in the SEC.

“I know there was probably some people that put dirt on the coffin,” Calipari said. “We pushed the coffin open and said, ‘You ain’t putting that dirt on this.’ “