LEXINGTON, Ky. – After enjoying a prolific junior season in which he was an all-conference performer, Kentucky men’s basketball forward Nick Richards announced Tuesday that he plans to submit his name for the 2020 NBA Draft and forgo his remaining eligibility by signing with an agency.

Richards’ improvement in 2019-20 was one of the best stories of the college basketball season and reinforced head coach John Calipari’s pitch that every player is on his own timetable.

“After our win at Texas Tech I talked about how everyone who comes to Kentucky has their own path,” Richards said. “Thanks to the best coaching staff in the country and my amazing teammates I’ve continued to develop my game and improved each and every year. I told you then that I’ve had the time of my life suiting up for the best fans in the country and I stand by that.

“I’ve had the chance to meet incredible people and be pushed in all phases of my life. That’s thanks to Coach Cal, KP (Kenny Payne), Tony (Barbee), Joel (Justus), Robes (John Robic) and each one of my teammates. I want to thank Rob (Harris), Michael Stone, our trainers, the managers and everyone who played a role in my development during my time at Kentucky. I also need to thank my family and Leah (Edmond), who have always been my biggest supporters. Without you, none of this is possible. 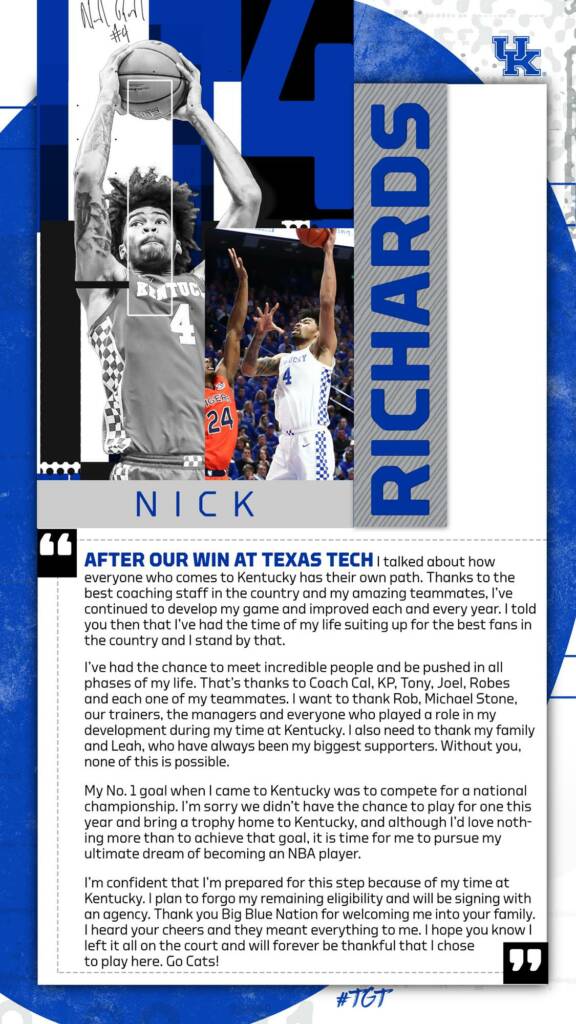 “My No. 1 goal when I came to Kentucky was to compete for a national championship. I’m sorry we didn’t have the chance to play for one this year and bring a trophy home to Kentucky, and although I’d love nothing more than to achieve that goal, it is time for me to pursue my ultimate dream of becoming an NBA player.

“I’m confident that I’m prepared for this step because of my time at Kentucky. I plan to forgo my remaining eligibility and will be signing with an agency. Thank you Big Blue Nation for welcoming me into your family. I heard your cheers and they meant everything to me. I hope you know I left it all on the court and will forever be thankful that I chose to play here. Go Cats!”

Richards enjoyed the most productive season of his career. After averaging 4.5 points, 3.9 rebounds and 1.1 blocks over 13.4 minutes a game in the first two seasons of his career, Richards turned into an All-Southeastern Conference First Team player in 2019-20.

“Of all the kids that we’ve coached who have elevated and benefited from the culture we’ve built here, I would say Nick is at the top of the list,” Calipari said. “Nick’s ability to self-evaluate and block out the clutter for the last three seasons has shown incredible maturity. To be able to look inward and say, ‘I need more time and I wouldn’t trade this time at Kentucky for anything in the world,’ says a lot about Nick.

“What Nick has been able to do with his body, his mind and mastering his skills, it’s been incredible and rewarding to watch as a coach. It’s been a pleasure to see him grow into the player and the young man he has become, and he’s done it all because of his hard work and his dedication. It has all paid off.

“Nick will leave here as a fan favorite and deservedly so because of the way he’s handled himself both on and off the court. He’s become the best version of himself and I couldn’t be happier for him.”

Richards is the fourth Wildcat to declare for the NBA Draft. Immanuel Quickley announced his decision on Monday, Tyrese Maxey declared last week and Ashton Hagans was the first to announce his intentions.

Richards was one of four players in the country to average at least 13.5 points per game, at least 7.5 rebounds and at least 2.0 blocks while shooting at least 60.0% from the floor. He was in the 98th percentile of offensive efficiency in the Synergy national rankings and in the 88th percentile on defense.

The forward from Jamaica was an All-SEC First Team selection by the league’s coaches, was named to the National Association of Basketball Coaches All-District 20 First Team, won two national player of the week honors in 2019-20 and was a two-time SEC Player of the Week honoree.

Richards played well early in the season, but his meteoric rise began vs. Louisville and continued into the conference season. Against the Cardinals’ frontline, one of the best in the country, Richards delivered. The 6-foot-11 big man secured a double-double with 13 points and 10 rebounds, but it was how he did it that impressed the most.

Playing the final 8:53 of regulation and all five minutes of overtime with four fouls, Richards took two momentum-changing charges and scored seven straight points in overtime with the game on the line. With Louisville leading 68-65 with 2:21 to go in overtime, Richards snared an offensive rebound (one of six in the game) and converted the traditional three-point play to even the score once again. His free throws with 27 seconds remaining gave the Wildcats a 72-70 lead they would not relinquish. Richards also drew a game-high 11 fouls to get Kentucky to the free-throw line, a key difference in the outcome. His defense was a difference maker.

The double-double was Richards’ first against a ranked opponent in his three seasons. In 20 games prior vs. ranked foes, Richards averaged 3.8 points and 3.9 rebounds per game. He had never recorded double-digit scoring or rebounding numbers against a ranked opponent. Richards did it again vs. nationally ranked Texas Tech with a monster 25-point, 14-rebound, four-block performance.

In the game in Lubbock, Texas, Richards became just the second Wildcat in the Calipari era to post at least 25 points, 14 rebounds and four blocks in a game. National Player of the Year Anthony Davis did it in 2012.

Richards was dominant from start to finish vs. the Red Raiders. After setting the tone early in the game with a thunderous dunk and a handful of intimidating swats, he took over in overtime with seven points, including the game-winning free throws with 10 seconds left and nearly 15,000 hostile fans screaming at him to miss.

Another noteworthy performance includes a 27-point, 11-rebound game vs. Mississippi State, featuring 25 points in the second half.

Richards also led the Wildcats with 66 blocks, including 18 games with multiple rejections. He blocked seven shots vs. Lamar, the first Wildcat with seven or more swats since Karl-Anthony Towns in 2014-15 and he blocked six at LSU.

Richards in three seasons is now third all-time in program history with a career field-goal percentage of .628 with a minimum of 50 attempts, he ranks 10th all-time with 146 career swats and his 528 rebounds ranks 46th.