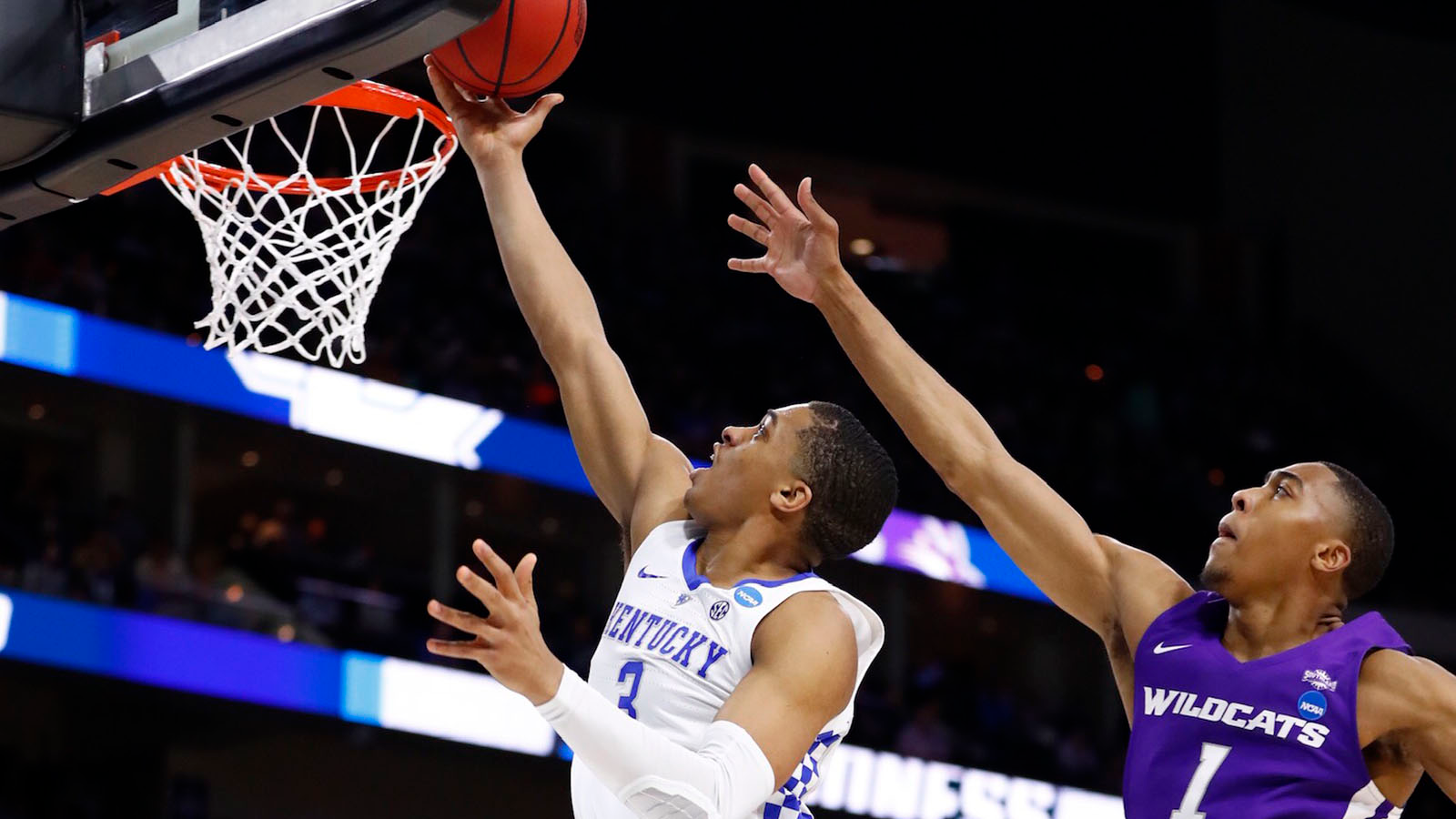 JACKSONVILLE, Fla. – Kentucky could afford to be down a man against NCAA Tournament newcomer Abilene Christian.

Going forward, the Wildcats are surely going to need that guy who was zipping around the arena on a scooter, most of his lower left leg covered by a hard cast.

With PJ Washington sidelined by a sprained foot, second-seeded Kentucky still romped past the small Texas school 79-44 on Thursday night – a huge mismatch that was over by halftime.

Washington, who sprained the foot in the Southeastern Conference Tournament, is Kentucky’s leading scorer and rebounder. Still, the Wildcats had far too many weapons for the Southland Conference representative.

”We got out of the gate really guarding and blocking shots and shot a high percentage,” coach John Calipari said.

Kentucky advanced to the second round of the Midwest Regional on Saturday to face either Wofford or Seton Hall, who were playing in the final game of a long day in Jacksonville.

The big question: Will Washington be able to go?

”If they take (the cast) off tomorrow to check him, he might be able to play,” Calipari said. ”If they don’t, he won’t play Saturday. Then, they would probably take it off Tuesday or Wednesday,” giving Washington a chance to play if the Wildcats advance to the second weekend.

Calipari isn’t looking ahead that far.

Saturday’s game will be enough of a challenge.

”If PJ doesn’t play, we’ll have work to do with either team,” the coach said.

Calipari stressed that Washington’s injury was only a sprain, not a fracture. But the 6-foot-8 sophomore certainly didn’t look close to returning as he watched from the bench, only standing during timeouts and making sure not to move around too much. He had the scooter parked nearby, using it to get between the locker room and the court.

”He had the option of the boot or the cast,” Calipari said. ”They said a cast would spend up the healing, so I said put the cast on.”

Kentucky could certainly afford to be cautious in its tournament opener. Abilene Christian is also known as the Wildcats, but that was about the only thing these teams have in common.

The striking disparity – one of the nation’s most storied programs vs. a small Texas school not far removed from playing in Division II – was best epitomized by the point guards. Kentucky started Ashton Hagans, a 6-foot-3 freshman who was one of the nation’s top recruits. Abilene Christian countered with 5-7 freshman Damien Daniels, who missed all five of his shots.

The biggest scare for Kentucky came with just under 2 minutes remaining when Nick Richards went down hard after getting his legs cut out from under him going for a rebound. After pounding the court several times in pain, he was able to get up, shoot a pair of free throws and finish the game.

”If we get another guy hurt, our staff is going to have to start playing.” Calipari said.

HANGING BY A THREAD

Abilene Christian coach Joe Golding stuck with his only suit, even though the pants were ripped from a celebration on Selection Sunday.

He kept on his jacket throughout the game, just to make sure the hole was covered.

”The suit is done,” Golding said. ”It wasn’t very good luck tonight, man, but it’s been a heck of a run with it.”

The torn suit gained such notoriety that someone started a GoFundMe page for a new set of duds.

Golding said that money will be donated to a worthy cause. He might even put the ripped pants up for auction.

”We’ll have a little bit of fun and hopefully we can raise some money for a charity or something,” he said.

Abilene Christian: It didn’t take long to figure out this team simply wasn’t in the same class as Kentucky. Jaren Lewis led the JV Wildcats with 17 points, the only player in double figures.

Kentucky: It’s hard to get much of a gauge on Calipari’s team with Washington sitting out and the opponent providing little more than a glorified scrimmage. The next game will surely be a much tougher challenge.

Abilene Christian: Returns to Texas with a lifetime of memories and facing the challenge of replacing three senior starters. ”It stings losing like that,” said Lewis, one of those seniors, ”but it was a great experience, probably something we’ll never forget.”

Kentucky: Seton Hall would provide the Wildcats with a rematch against the team that handed them one of their two nonconference losses. Duke was the other.