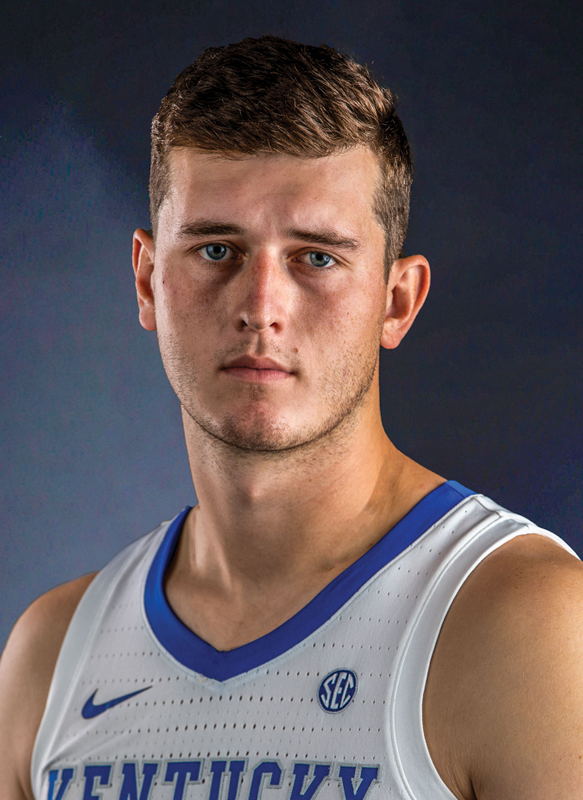 Redshirt Sophomore: Dean’s list spring 2020 … Two-sport athlete who is also a right-handed pitcher on the UK baseball team … Joined the squad in mid-October … Tasked with guarding Nick Richards in practice every day and helped with the big man’s national emergence … Made two appearances in his first season on the team … Attempted his first shot in his debut vs. Eastern Kentucky.

Redshirt Freshman: Did not participate in basketball … Returned to the baseball diamond after redshirting the 2017-18 season while recuperating from injury … Appeared in 10 games on the diamond … Logged 8.2 innings, allowing eight hits and seven runs while striking out eight … Made his collegiate debut in baseball on Feb. 17 vs. Austin Peay … Pitched a scoreless inning vs. No. 2 Vanderbilt to close out the season.

Freshman: Did not participate in basketball … Redshirted in baseball as he recovered from injury.

A highly-productive player out of West Carter High School … Concluded his career as the school’s all-time leading rebounder and shot blocker … Also finished eighth in school history in career points … Won the Eastern Kentucky Conference Defensive Player of the Year during his senior season … Also added EKC First Team  honors … All-Area player in baseball and basketball during his sophomore, junior and senior seasons … Averaged 12.2 rebounds per game his senior season … Was a 2016 Under Armour All-American in baseball … 2017 Rawlings-Perfect Game Second Team All-American … Perfect Game Central – All-Region First Team … Perfect Game 2015 and 2016 Underclass First Team … Rated the No. 97 overall baseball prospect and the No. 33 right-handed pitcher in the class of 2017 … Ranked the No. 3 baseball prospect in the state of Kentucky.

Born June 2 in Ashland, Kentucky … Major is communications … Parents are Kevin and Stephanie Jordan … Has three younger sisters, Abby, Kara and Jenna … His most prized possession is his Gibson Les Paul guitar … A favorite activity away from sports is fishing … His father has been his life’s greatest influence … Has a German Shepherd named Brutus … Nickname is “Fluff.”