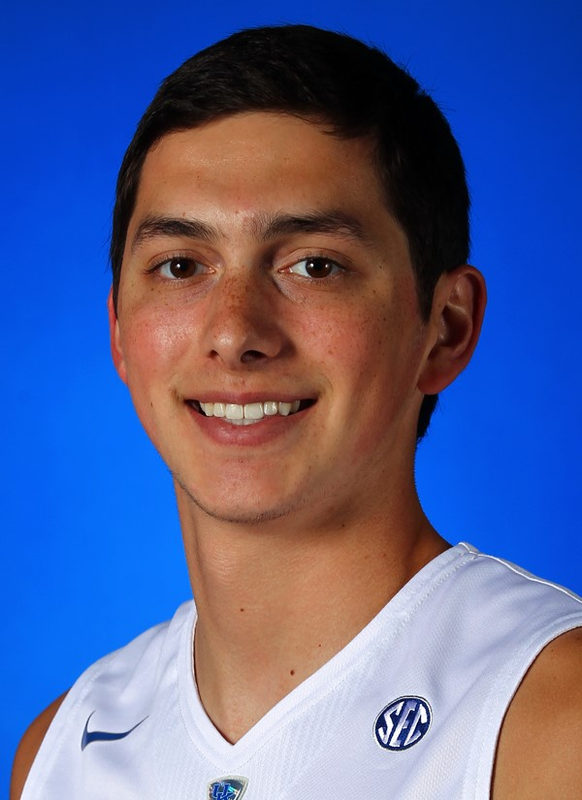 Senior: 2018-19 Winter SEC Academic Honor Roll member … Dean’s List fall 2018 … Selected as a member of the 2019 SEC Community Service Team for his excellent work in the community … Graduated in May with a degree in kinesiology … Member of UK’s Student-Athlete Advisory Committee … Saw action in 10 games this season, including starting the first game of his career on Senior Day vs. Florida … Played a career-high 14 minutes during his final campaign … Snared his first career rebound, on the offensive end, in two minutes in a win against North Dakota … Played two minutes against Auburn, Monmouth, North Dakota and Abilene Christian … Team’s Student-Athlete Advisory Committee member … Played a key role in UK’s relationship with the Special Olympics, including helping organize fan participation in the Polar Plunge, a fundraiser for the Special Olympics of Kentucky.

Bahamas: Appeared in UK’s final two games of the foreign tour … Scored the game’s final bucket in the win over Team Toronto … Hauled in two rebounds against Mega Bemax.

Junior: SEC Academic Honor Roll member … NABC Honors Court … Dean’s List fall 2017, spring 2018 … Saw action in six games as a junior … Played a season-high two minutes in a win over UIC … Appeared in wins over Louisville and in the second round of the NCAA Tournament in the win over Buffalo.

Sophomore: SEC Academic Honor Roll member … Dean’s List fall 2016 … Appeared in seven games as a sophomore, totaling five points … Made appearances in five of the first seven games … Best game at UK was vs. Texas A&M with a career-high five points in two minutes of action vs. the Aggies in Rupp Arena … Made a 3-pointer, the first field goal of his career, in addition to two free throws vs. Texas A&M … Logged a career-high three minutes vs. Cleveland State with one field-goal attempt.

Freshman: SEC First-Year Academic Honor Roll member … Appeared in 11 games during his freshman campaign … Played in a season-high two minutes in games against NJIT and Georgia … Made his NCAA Tournament debut in UK’s victory over Stony Brook in the first round … Drained his only two free-throw attempts of the season in a win over South Florida.

A graduate and four-year letterwinner for Mount Lebanon High School … He averaged 18.5 points per game in his senior year … A 6-foot-2 guard earned all-state honors while leading Mount Lebanon to a sectional championship … A prolific 3-point shooter, David was a 1,000-point scorer during his career at Mount Lebanon … Was a two-time all-section honoree … Appeared in the Hoops for a Cure All-Star game … Also was a member of the Roundball Classic All-Star game … An honor-roll student, he was a member of his high school’s honor society … Coached by his father, Joe.

Son of Joseph and Sandi David … Major is kinesiology … Born Nov. 7 in Pittsburgh … … Father was a basketball letterwinner for the University of Pittsburgh … Has two brothers, Justin and Jeremy, and a sister, Samantha … Brother Justin played basketball for South Florida … Most memorable moment as a basketball player was hitting the game-winning shot on senior night to win the sectional championship … Chose No. 10 because he has always worn it … Pregame superstitions include listening to music and relaxing … Biggest influences in life are his parents and brothers who also played basketball … Wanted to be a physical therapist growing up.