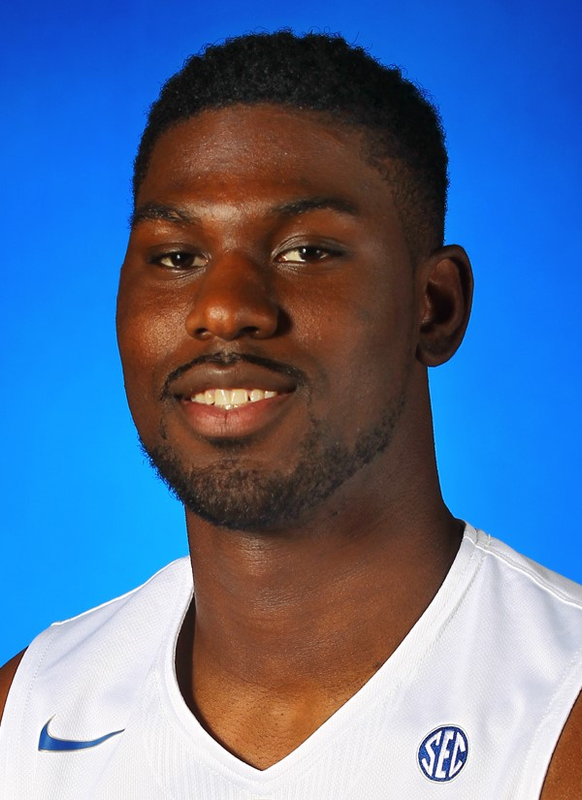 Senior: Named to CoSIDA’s Academic All-America Second Team … One of four finalists for the Arthur Ashe Jr. Player of the Year Award … One of 30 candidates for the Senior CLASS Award … Finished his career with 112 games played and 62 starts … Returned from an ACL injury in his left knee in 2014-15 and appeared in 31 games in 2015-16 with 23 starts … Averaged 10.2 points, most among UK’s frontcourt players, and a 6.0 rebounding average which tied for the team high … Posted four double-doubles, tied for the second most on the team … Led the team in rebounding eight times … Finished his career with 966 points, 597 rebounds and 77 blocks, becoming just the 12th player in program history with at least 900 points, at least 500 rebounds and at least 70 blocks … Averaged double figures for the second time in his career while earning a career-best 19 steals … His .601 field-goal percentage ranks as the fifth best in the John Calipari era … Scored in double figures in 10 of his last 13 games … Missed five games in February due to a right knee injury … Scored in double figures in seven of the last nine games, including six straight, after returning from the right knee injury, averaging 10.7 points during that stretch … Strong NCAA Tournament game vs. Stony Brook with 12 points and four rebounds … Helped UK to the SEC Tournament championship with 10 points and six rebounds vs. No. 17 Texas A&M … Nearly unstoppable vs. Georgia in the SEC Tournament with 20 points and seven rebounds on 7-of-8 shooting … Notched a double-double at Florida with 12 points and 10 rebounds … Returned from a right knee injury and scored 14 points in just 17 minutes in a key home win vs. Alabama … Scored 14 points in just 17 minutes at Tennessee … Solid all-around game at No. 4 Kansas with 13 points, eight boards, two steals and a block … Made 8 of 10 shots en route to 16 points at home vs. Vanderbilt … Blocked three shots at Auburn … Scored a career-high 25 points at Alabama on 8-of-10 shooting and a 9-of-11 day at the free-throw line … The 25 points vs. Alabama was the most by a senior in the Calipari era at Kentucky … Also grabbed seven rebounds at Alabama … Pulled down nine rebounds in the home win vs. Ole Miss … Posted 14 points, six rebounds and three blocks in the victory over No. 16 Louisville … Had a career day against Eastern Kentucky with 21 points and a career-high 13 rebounds, including six on the offensive glass … Was 9 for 12 from the field in the EKU game … Flirted with a double-double with nine points and seven rebounds in the win over Illinois State … Posted back-to-back double-doubles in wins over Boston U. and Wright State … Against Boston U., totaled 14 points and 10 rebounds … In the victory over Wright State, recorded 10 points and 10 rebounds … Back-to-back games with nine points and seven rebounds vs. No. 5 Duke and NJIT.

Junior: An SEC Academic Honor Roll member for the third time in his career … Earned his undergraduate degree in business marketing from UK in just three years … Missed the final 29 games of his junior season after suffering a torn anterior cruciate ligament in his left knee during a practice in early December … Started the eight games in which he appeared … Averaged 5.5 points, 3.8 rebounds and 1.5 blocks per game … Had eight points in the win over No. 6 Texas … Posted six points and a career-high two steals in the win over Providence … Logged four points and a career-high four blocks with nine rebounds in the win over UT Arlington … Registered nine points and six rebounds with a pair of blocks in the season-opening win over Grand Canyon.