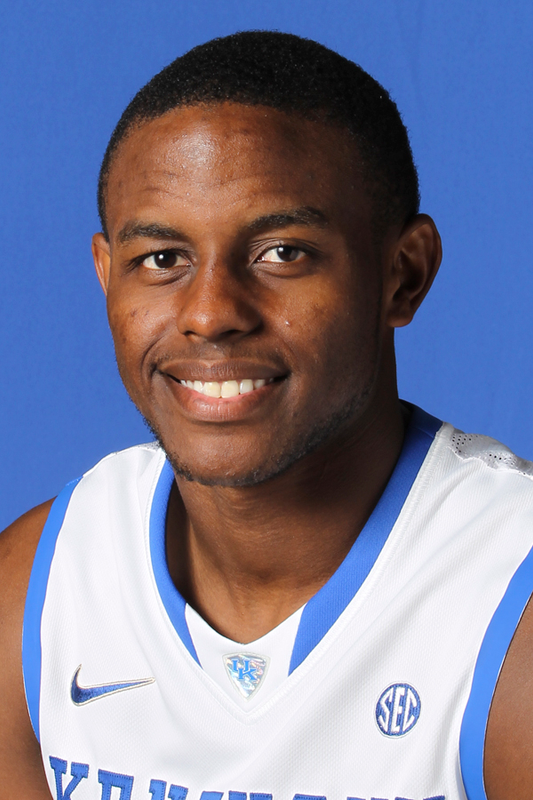 Junior: Started 37 of 38 games, averaging 10.9 points per game and 4.6 rebounds … Hit a 3-pointer in 36 of 38 games … Averaged 15.6 ppg during his 10-game streak of at least 10 pts. … Scored 11 pts. vs. UNC?to help UK advance to Final Four … Scored 15 of game-high 17 pts. in first half of NCAA?Tournament opening game vs. Princeton … Named the SEC Tournament MVP after averaging 13.3 points and 5.6 rebounds during the three-game run … Posted 10 points, four rebounds and four assists vs. Alabama in the SEC Tournament semifinals … Totaled 15 points and seven rebounds vs. Ole Miss in the SEC Tourney quarterfinals … Scored a career high 24 points against Florida to go with three assists and three blocks … Had 13 pts. and eight boards at Arkansas … Scored 22 points vs. South Carolina, including a career-high six 3-pointers made, nine rebs. and three blocks … Had 14 pts. and seven rebs. in win over UGA … Scored a season-high 18 pts. at South Carolina while playing a career-high 39 minutes … Was 5-of-8 from the field against Alabama … Scored 15 points against LSU?on 7-of-11 shooting from the field … Tied a career high with seven made field goals against LSU … Filled the stat sheet against Penn with 11 pts., seven rebs., six assists, two blocks and two steals … Posted seven first-half points to help UK stake an 11-point halftime lead at Louisville … Totaled 14 pts., including 5-of-5 from the charity stripe, along with five assists and three blocks vs. MVSU … Tied for a team-high seven rebounds against North Carolina … Scored 13 points on 4-of-8 shooting from the field against UNC … Scored 15 pts. vs. UConn in Maui Invitational championship game, including 13 in the second half … Recorded career-highs of five steals and four blocks at Portland … Scored 15 points on a sharp 6-of-7 shooting from the field, including 3-of-4 from beyond the arc, and dished out a game-high four assists … Grabbed a career-high 11 rebounds in UK’s season opener against ETSU.

Sophomore: Started 32 of 38 games, averaging 6.5 points … Totaled nine points, four assists and three steals vs. Cornell in the NCAA Tournament … Scored a career-high 20 points, shooting 7-of-9 from the field with a team-leading nine rebounds vs. Wake Forest in the NCAA Second Round in New Orleans … Led UK with 14 points, shooting 3-of-5 from behind the arc vs. Florida … Key scorer during the comeback attempt at Tennessee, finishing with seven points, four rebounds, two blocks and two steals … Finished with seven points, eight rebounds and two blocks in win over South Carolina … Scored nine points with two blocks in the overtime win at Mississippi State … Posted a career-high 18 points, including four 3-pointers vs. Arkansas … Totaled nine points, four rebounds and two assists at Florida … Scored a season-high 16 points, including a career-high four 3 -pointers and dished out a season-high five assists vs. Hartford … Scored 11 points vs. Austin Peay … Dished out a season-high four assists at Indiana … Totaled a season-high three steals vs. UConn … Scored all eight points in UK’s 28-2 run vs. North Carolina … Recorded his second straight game with three 3-pointers vs. UNC Asheville … Totaled 13 points and three assists, tying a career high with three 3-point baskets … Posted a near double-double with nine points and a team-leading eight rebounds vs. Cleveland State in Cancun … Scored 15 points, including 3-of-6 from 3-point range with three assists in the win over Sam Houston State … Posted nine points and five rebounds in UK’s win over Miami-Ohio.

Selected to USA U-19 National team over the summer … Played in all nine games, earning two starts in helping lead Team USA to gold medal at U-19 World Championship in New Zealand … Led the team with 12 blocked shots, while averaging 5.0 points per game and 3.1 rebounds per game.

Freshman: Played in 36 games, starting two in his first season as a Wildcat … Averaged 8.1 points per game over the last nine contests … Recorded 12 points and eight rebounds in his collegiate debut against VMI … Totaled a career-high 13 points and four assists vs. Delaware State … Earned his first career start vs. Longwood … Logged 32 minutes vs. West Virginia, totaling six rebounds and three assists … Scored six points in 25 minutes vs. Lamar … Earned his second career start, totaling a career-high 10 rebounds, five assists and two blocks in a career-high 34 minutes vs. Miami … Totaled four assists and a season-high two steals vs. Appalachian State … Tied a career high with five assists against Tennessee State … Scored seven points with three rebounds and two blocks in 21 minutes at Tennessee … Logged 15 minutes, with four points and two rebounds at Georgia … Played 20 minutes in the second half, totaling seven rebounds, three blocks, two steals and two assists in 33 minutes at Alabama … Posted the third double-figure scoring game of his career, totaling 12 points, nine rebounds, five assists in 31 minutes at Ole Miss … In 31 minutes vs. Mississippi State, totaled seven points, five assists and three steals … Made two clutch free throws down the stretch vs. Florida … Totaled eight points, six rebounds and three steals at Arkansas … Had his best day as a Wildcat, setting career-highs with 17 points and six assists to go along with two blocks vs. Tennessee … Miller was also perfect from the field (6-for-6), from behind the arc (3-for-3) and from the charity stripe (2-for-2) … Was 2-of-2 from behind the arc vs. LSU, tying the game at 70-70 with 27 seconds remaining … Scored 12 points vs. Ole Miss in the SEC Tourney.