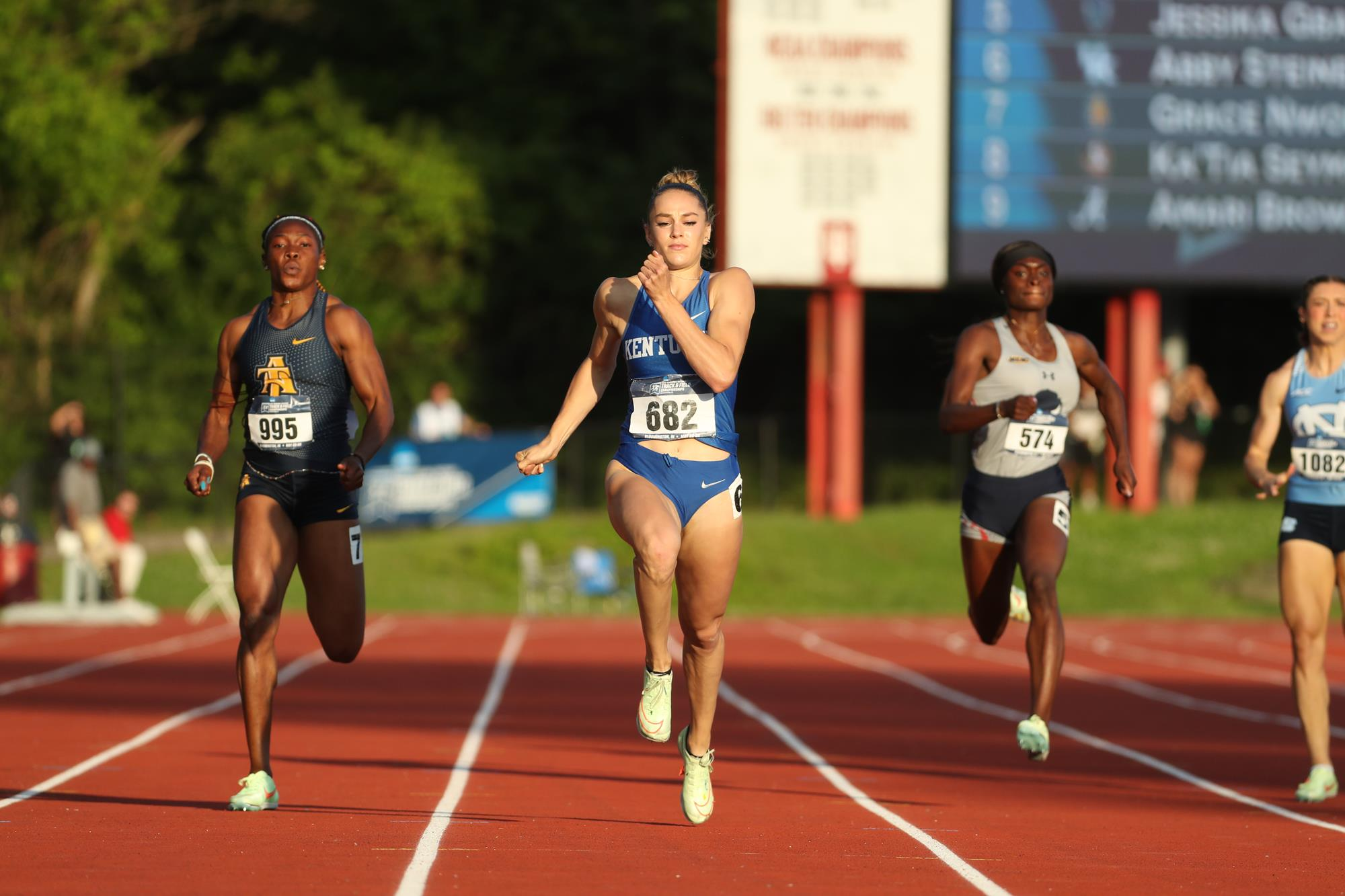 UKTF to Send 19 to NCAA Championships

The nine women’s team qualifiers on day four joined Jade Gates who qualified on day two and the nine men’s qualifiers from the first and third days.

Each of the 19 qualifiers placed in the top 12 of their respective events to be one of the 24 to compete in Eugene, Oregon from June 8-11.

The Wildcats had an impressive final day on the track in Bloomington, capped off by three of the four members of the collegiate record 4x400m earning the top qualifying spot for NCAAs with a time of 3:26.90.

Abby Steiner went three-for-three in her events, running the top time of the 200m quarterfinal (22.01w, +2.1). Her 200m time was just over the wind-legal limit, and if it was .01 lower it would have been the second fastest time in collegiate history, a track record and a school record.

The 4x100m featuring Steiner, Shadajah Ballard, Masai Russell and Davis ran 42.95, the second fastest time of the first round, to punch their ticket to Eugene.

Holmes also impressed, keeping her streak of under 52-second times with a 51.24 run to cement herself as an NCAA 400m qualifier outdoors for the first time in her career.

Perri Bockrath shined in the 3,000m steeplechase, qualifying with a school record time of 9:52.00, beating out her own school record she set two weeks prior at SEC Championships by just under a second. This will be Bockrath’s first individual NCAA berth of her career.

Freshman Sophie Galloway shocked the triple jump field by qualifying for NCAA Championships in the No. 8 spot, the only true freshman in the field to make it. Her jump of 42’9.5″/13.04m set UK’s freshman record, was fourth all-time for UK and a personal best. This was just her seventh meet as a Wildcat, having transferred to Kentucky in January and missing the indoor season.

Davis will join Steiner in the 200m in Eugene, running an outdoor personal best and 8th fastest time in UKTF history (22.84) to qualify in the 200m for the first time in her career.

Moss, a 2020 Olympian for the Bahamas, will return to Eugene for the second year in a row as an individual qualifier in the 400m, running a personal best 52.07 for the qualification.

The men’s 4x400m was the highlight of the day, finishing with the fourth fastest time of the field (3:03.28) and winning their heat to automatically qualify for NCAA Championships. The relay featured St. Hillaire, Lang, Lightner and Faust.

St. Hillaire and Faust also secured spots in the 400m semifinal at NCAAs, finishing seventh (45.63) and 11th (45.94) in quarterfinals. St. Hillaire earned an automatic qualifying spot by placing third in his heat while Faust qualified based off his time, which was also an outdoor personal best for the Purdue transfer.

The men’s 4x100m featuring Heath Jr., Lang, Smith and St. Hillaire earned an automatic qualification by placing third in their heat with a time of 39.33 with the seventh fastest time overall among the field.

Kenroy Williams earned his second outdoor nationals-berth in a row in the 400m hurdles (50.96).

Sobota and Rahman Minor narrowly missed qualifying for NCAAs by placing 14th in discus and 15th in high jump, respectively. Sobota will make the trip to Eugene to compete in shot put.

Her 100m run of 10.99 with a 2.5 m/s tailwind was under the existing facility record, but the tailwind made the run ineligible for the record. It was also the top time of the first round.

Williams ran 50.55 for the eighth fastest time out of 48 qualifiers and will run in Friday’s quarterfinal. Beck O’Daniel finished 35th with a time of 52.41.

Heath Jr. joined Lang in qualifying for 100m quarterfinals, finishing third in his heat to automatically qualify with a time of 10.38.

Thirty-four Wildcats, 19 from the women’s team and 16 from the men’s team, made the trip to Bloomington and are competing for an NCAA Championships berth. The women are set to conclude the competion on Saturday.