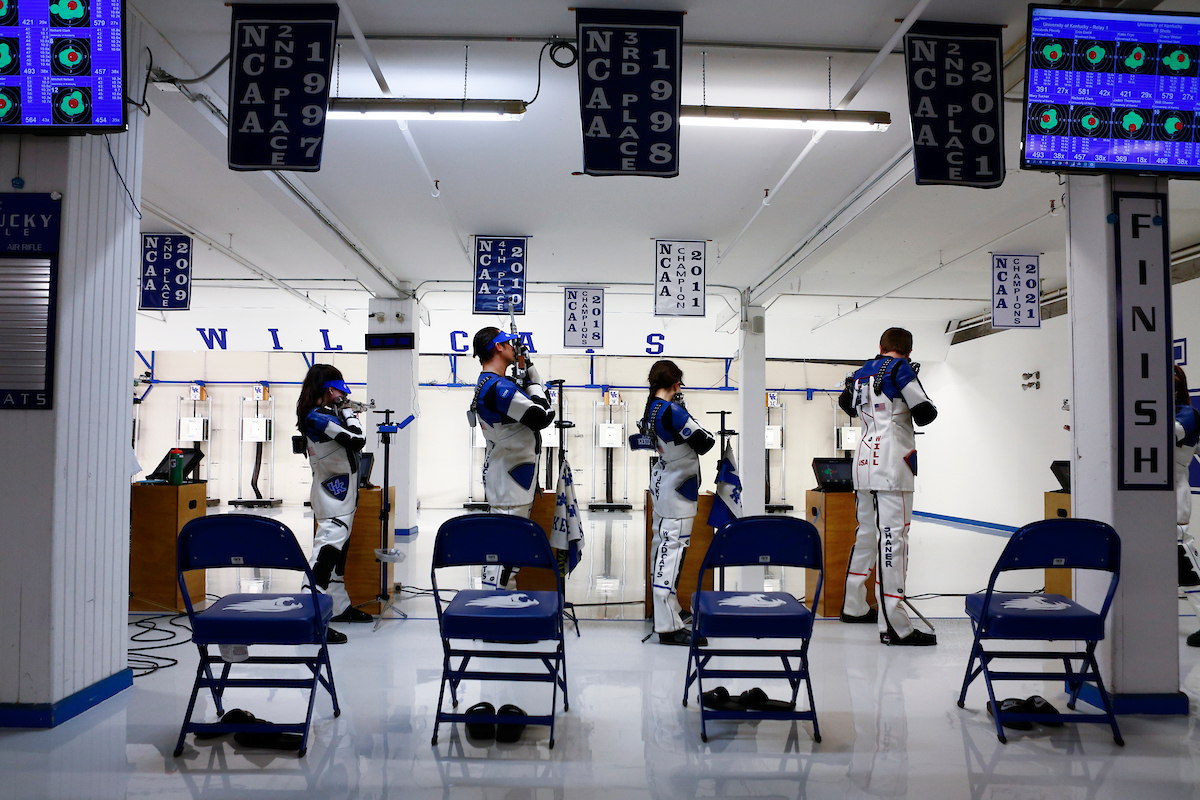 LEXINGTON, Ky. – University of Kentucky rifle seniors Will Shaner, Richard Clark and Mitchell Nelson, along with junior Mary Tucker, have been named All-Great America Rifle Conference performers for their strong work representing the Wildcats this season, it was announced Thursday evening.

This is the fourth straight season that Shaner has earned first-team All-GARC honors in smallbore, air rifle and combined. The native of Colorado Springs, Colorado, receives the Senior of the Year award as the top senior performer in the league. Shaner is leading Kentucky in aggregate average this season at 1186.889, averaging a 590.222 in smallbore and 596.667 in air rifle. The native of Colorado Springs, Colorado, set a career high smallbore score this season when he posted a 596 at Army, while he has tied his career best air rifle score of 599 twice. Last season, Shaner was the NCAA Air Rifle Individual National Runner-Up while earning Collegiate Rifle Coaches Association All-America honors in smallbore, air rifle and overall. Last summer, he became the first American male to win gold in men’s 10m air rifle, setting an Olympic record score (251.6) in Tokyo.

Tucker, who was the GARC Shooter of the Year each of the last two season on top of All-GARC First Team honors both years in all three areas, is averaging 589.556 in smallbore, 597.222 in air rifle and an aggregate of 1186.778. She has accomplished her season-high smallbore score of 594 twice as she is one of five athletes in the NCAA to record a 594 or higher in smallbore this season. Tucker shot her second perfect 600 in air rifle this season as she is one of six athletes in the NCAA to accomplish the feat. The native of Sarasota, Florida, is one of four athletes in the NCAA To score a 1194 or higher aggregate this season. Last season, Tucker was the NCAA Smallbore, Air Rifle and Combined Individual National Champion.

Clark is having a monster season for Kentucky, averaging 585.182 in smallbore and 597.222 in air rifle for an aggregate average of 1179.364, which ranks third best on the UK squad. The native of Jackson, Michigan, has set career highs this year in both disciplines with a 592 in smallbore vs. Murray State and 598 in air rifle at Army. Last year at the NCAA Championships, he shot a 585 in smallbore and 594 in air rifle to help UK clinch the title. He was named All-GARC Smallbore Honorable Mention last season.

Nelson, who was an alternate for Kentucky at last year’s NCAA Championships, is averaging 580.818 in smallbore and 589.909 in air rifle this season. His aggregate average of 1170.727 ranks fourth on the team. He also secured career highs in both disciplines this season, earning a 587 in smallbore vs. Navy and 595 in air rifle at Army. This is the second time Nelson has been named a All-GARC Scholar-Athlete.