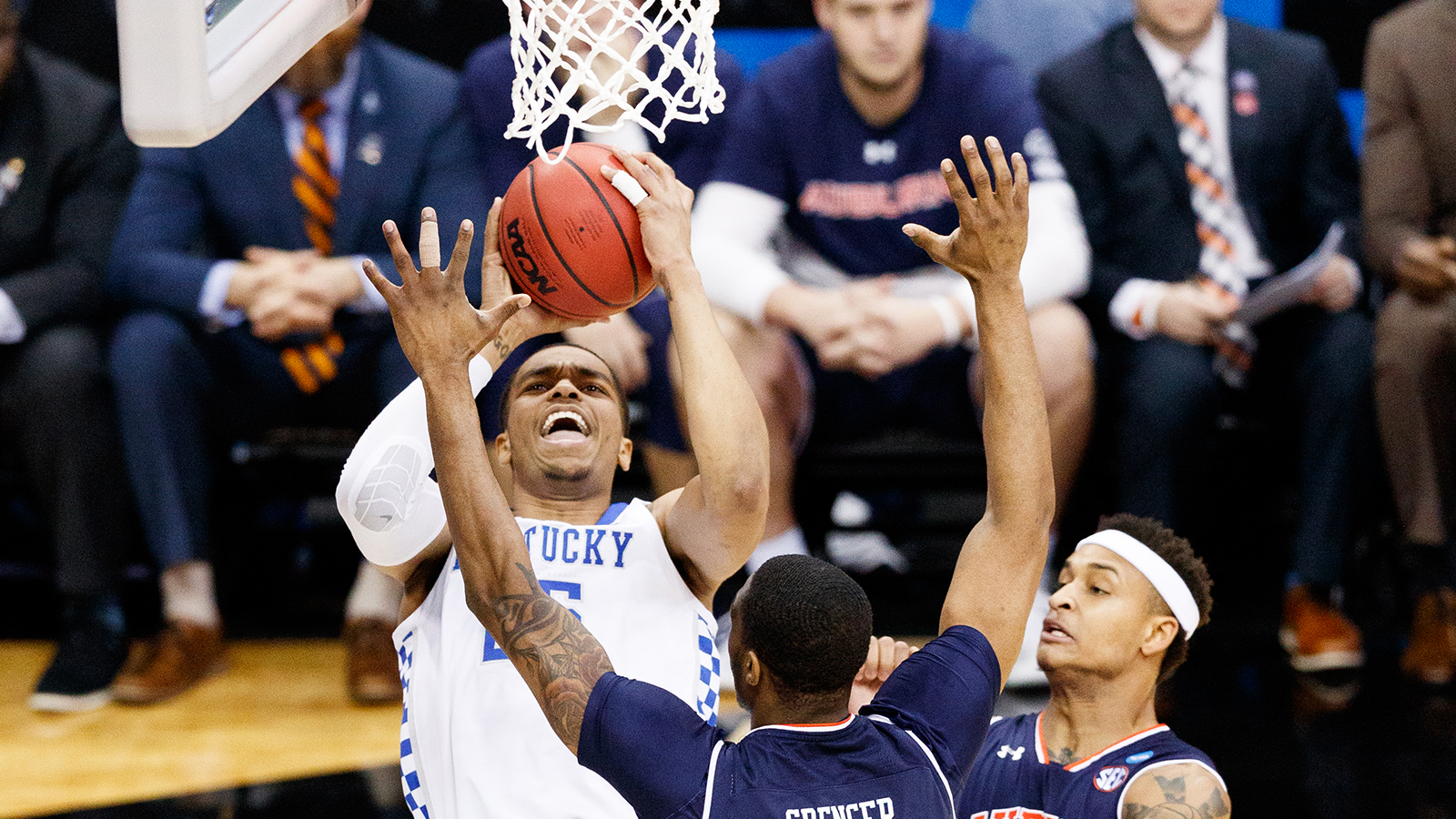 KANSAS CITY, Mo. – Bryce Brown scored 24 points, Jared Harper and Anfernee McLemore made the plays that mattered in overtime, and the fifth-seeded Tigers rallied from a 10-point hole to beat second-seeded Kentucky 77-71 on Sunday to earn the Auburn program its first trip to the Final Four.

”They played aggressive. They played tough. They bumped and it was a grinding-type game,” Kentucky coach John Calipari said. ”They deserved to win the game.”

PJ Washington came off the bench and had 28 points and 13 rebounds for the Wildcats, but he also had a shot blocked that could have given his team the lead in the final seconds of regulation. Keldon Johnson added 14 points and Ashton Hagans finished with 10, though he also committed seven turnovers.

”We thought we were going to win,” said Washington, who declined to say whether it was his final game at Kentucky. ”Just a lot of emotions not being able to finish it the way I wanted to.”

Harper finished with 26 points for the Tigers (30-9), who roared through Kansas and North Carolina just to reach the finals of the Midwest Region. But few gave the plucky bunch of 3-point specialists much of chance against the star-studded Wildcats (30-7), especially after they lost versatile forward Chuma Okeke to a gruesome knee injury in the closing minutes against the Tar Heels.

Chuma was there in more than just spirit, though. He was rolled behind the bench in his wheelchair early in the second half, and was right there to join in the celebration at the buzzer.

The Tigers had only reached the Elite Eight once before, and that was 33 years ago. But after twice losing to Kentucky during the regular season, they rose to the occasion on the game’s biggest stage.

They forced overtime when Harper made a tying layup with 38 seconds to go then the diminutive guard scored the first four points of the extra session. And when Hagans scored for Kentucky, it was McLemore who added back-to-back baskets that forced the Wildcats to play catch-up.

They never made it all the way back.

Samir Doughty made the second of two free throws to give Auburn a 74-71 lead with 16.1 seconds left, and the Wildcats’ Johnson misfired at the other end, wrapping up a victory that will surely send the Auburn fan base streaming to Toomer’s Corner.

Auburn coach Bruce Pearl admitted his team would need to shoot lights-out to beat Kentucky, and midway through the first half the Tigers were still searching for the switch.

The team that knocked down 17 3-pointers in a regional semifinal win over North Carolina missed seven of its first eight shots. Brown clanked two wide-open attempts in the first minute, and his brazen bunch quickly found themselves staring up at a big hole against a much bigger team.

The plan for Big Blue Nation was simple: bludgeon Auburn inside. And it became a whole lot easier when forwards Malik Dunbar, Horace Spencer and Austin Wiley picked up two fouls apiece.

Dunbar earned his third before halftime, earning a seat next to Pearl on the bench.

It’s never easy when it’s all over, but we won’t let the ending define our story. This group was as hard-working, as coachable and as fun to be around as any we’ve ever had. Truly terrific kids. #WeAreUK

Yet despite a depleted front line, the SEC Tournament champs managed to stay in the game. Harper kept dashing to the rim for layups, he converted a four-point play late in the half, and the Tigers – who had won 11 straight after a blowout loss at Rupp Arena – were within 35-30 at the break.

It took Brown finding his rhythm for the Tigers to find the lead.

The SEC’s most prolific 3-point shooter this season buried one early in the second half. After he added a pair of free throws on the next trip down floor, Brown corralled a loose ball and dropped another 3-pointer from the corner to give Auburn its first lead at 40-37 with 17 1/2 minutes left.

Then it was Washington’s turn to provide the clutch plays.

The sophomore forward, who eschewed the NBA draft for another year in Lexington, made an acrobat duck-under layup to knot the game 58-all. Then, Washington followed up his own miss with a finger-roll to give the Wildcats a 60-58 lead with a minute to go.

Harper’s scooping layup moments later knotted the game, and both teams had chances to score again in regulation. Washington and Johnson had shots swatted in the paint for Kentucky, and Spencer – an odd choice to take the final shot – missed an open 3 at the buzzer for Auburn.

All it did was delay the wild party that would soon take place on the Tigers’ bench.