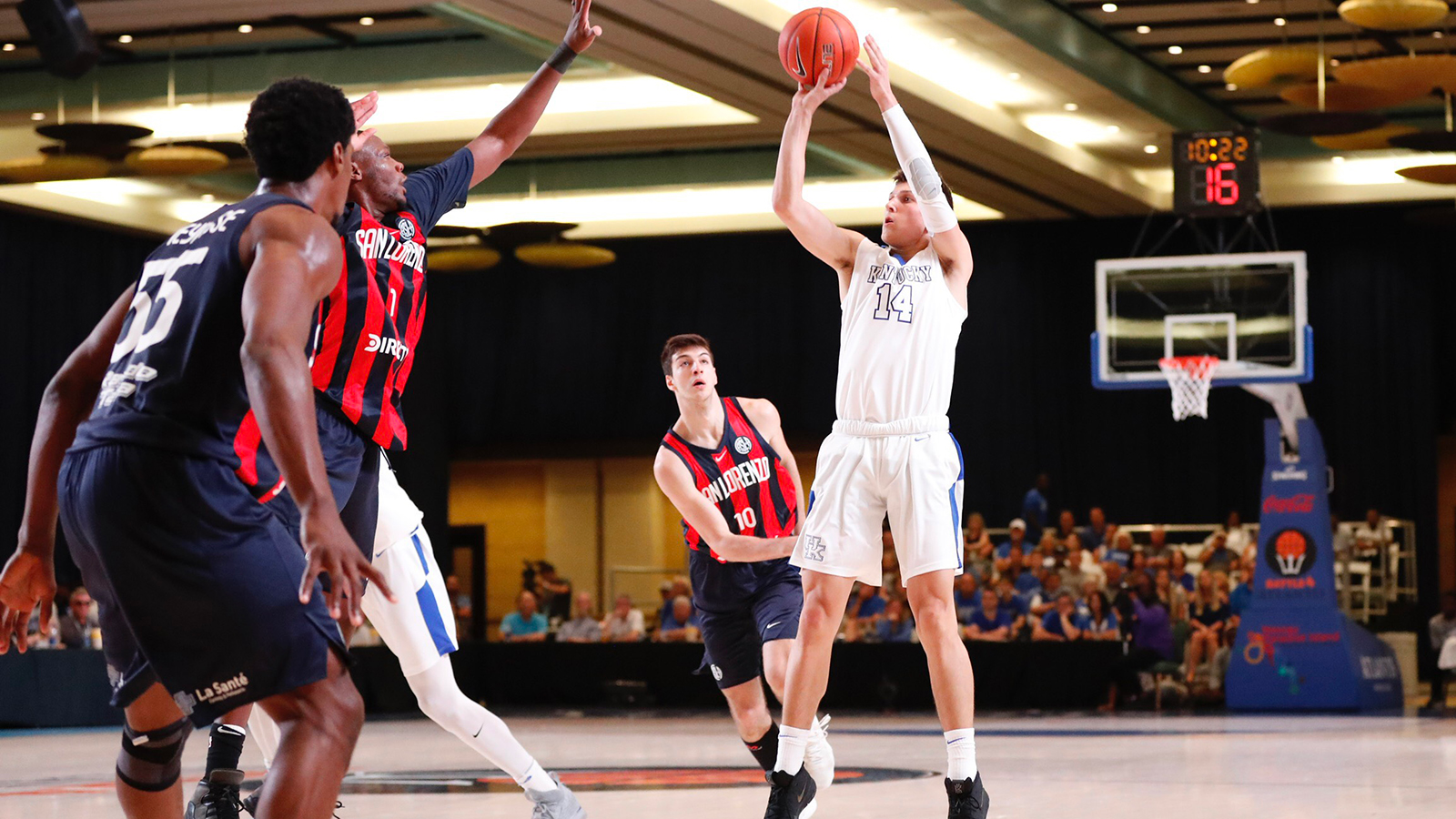 NASSAU, Bahamas – John Calipari offered a warning to his team on Thursday night.

“These are grown men tonight,” Coach Cal said before UK took on San Lorenzo de Almagro in the second game of its Big Blue Bahamas Tour. “You’re either going to go at them or they’re going to push you around.”

The Wildcats might not have been able to match the experience of their opponents, but they didn’t back down from the challenge.

Even though UK was facing the three-time defending Argentine National League champions, the Cats continued their winning ways on their Big Blue Bahamas Tour on Thursday night. Behind Tyler Herro’s 22 points, Kentucky claimed a 91-68 victory in front of a loud crowd made up of a large contingent of international traveling members of the Big Blue Nation.

The Cats built a double-digit lead midway through the first half on the strength of a red-hot start on offense. They made 14 of their first 20 shots from the field, including 3 for 4 from 3-point range. Unlike Wednesday night, when an early lead evaporated before the Cats regained their footing, UK maintained wire-to-wire control.

The only thing that could slow Kentucky down was a power outage in the final minutes of the first half, prompting an early halftime break. At that point, Herro had already piled up 15 points, including three treys in three tries, to further cement his fan-favorite status more than two months ahead of Big Blue Madness.

“He’s a confident kid,” assistant coach Tony Barbee said. “He believes in himself. The thing is he backs it up with his hard work. When you got somebody like that, you let him go.”

For a few brief moments, it seemed possible the 45-27 halftime score would be the final. The Cats weren’t having any of that, even with the lights far dimmer than they otherwise would have been with the resort running on generator power.

“There was a debate going on with Coach and the people running the event of not playing the second half at that time,” Barbee said. “And our guys were like, ‘Let’s play. We want to play. We want to finish.’ Tells you a lot about them.”

After the power came back on, Herro tried to shoot the lights out again with a late-game flurry. For the night, he made 7-of-10 shots and accounted for four of UK’s seven made 3-pointers as a team.

“We talked about him like he’s shooting the lights out,” PJ Washington said. “I don’t remember him missing any of them. We just gotta let him keep shooting. We gotta keep finding easy ways for him to score and he’s gotta keep putting them up.”

That kind of shooting has led to comparisons to players from Rex Chapman to Devin Booker, but Herro isn’t putting too much stock into the hype.

“I hear (the comparisons), but like Coach Cal said, it’s still early in the season,” Herro said. “There’s still a lot of work to do and just focusing each and every day on getting better and creating my own legacy.”

PJ Washington didn’t shoot like Herro, but he did score 15 points on 6-of-11 shooting, looking confident and strong scoring around the basket after bypassing the NBA Draft to return as a sophomore. His fellow sophomore returnees joined him double figures, as Quade Green and Nick Richards each had 10 points. Keldon Johnson (13 points) and Reid Travis (11) rounded out the double-figure scorers as UK shot 64.2 percent from the field.

UK will have a day off on Friday before returning to the court for games this weekend to close out the Big Blue Bahamas Tour. The Cats will take on Serbian professional team Mega Bemax at 7 p.m. on Saturday in a game that will be televised on the SEC Network. Regardless whether another power outage awaits them, they plan to make the most of every minute.

“We just love to play the game of the basketball,” Washington said. “We’re always in the gym. Every night, we have a lot of guys in the gym trying to work on stuff and get better. Just being out here to play with each other has been great. … We just love being able to show our abilities.”